Bernard Goldberg
|
Posted: Apr 04, 2017 12:01 AM
Share   Tweet
The opinions expressed by columnists are their own and do not necessarily represent the views of Townhall.com. 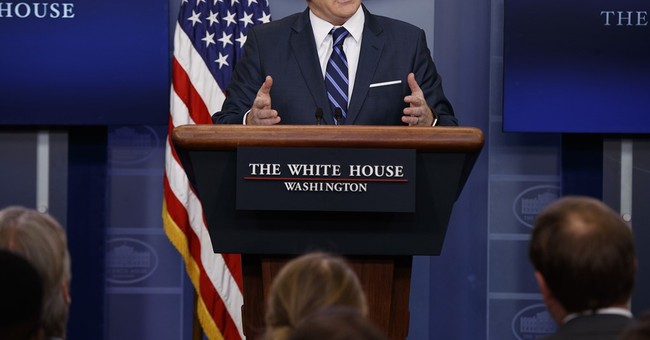 Trending
I almost feel sorry for Sean Spicer. I mean the poor guy's got a tough job. Defending the indefensible isn't easy. Especially when you're doing it in front of a bunch of people who detest your boss.

I'm starting to think that Spicer is channeling another well-known press flack, the indisputable champ in that line of work -- Muhammad Saeed al-Sahhaf, aka "Baghdad Bob," Saddam Hussein's information minister, the guy who had to say the most ridiculous things in defense of his boss.

Baghdad Bob would say stuff with a straight face that no sane person could believe, like American soldiers were committing suicide inside Iraq "by the hundreds" -- and that U.S. troops were on the verge of surrendering while in reality they were on the verge of demolishing what passed for Iraq's army.

Sean Spicer doesn't say anything that crazy. I mean defending his boss' unsubstantiated tweet that President Obama was bugging Trump Tower during the presidential campaign isn't confusing fantasy with reality. Wait. What?

And when his boss claimed that his inauguration crowd was way bigger than it really was, Sean Spicer stood at his lectern, looked reporters in the eye, and said, "This was the largest audience to witness an inauguration, period. Both in person and around the globe." Take that, Baghdad Bob!

And when Donald Trump said that 3 to 5 million illegal immigrants voted in the presidential election, Sean Spicer once again rode to the rescue.

"The president does believe that ... based on studies and evidence that people have presented to him," he told reporters. Too bad neither the president nor his press secretary presented any evidence to support the claim -- because there was none.

And just because Paul Manafort, the former chairman of Donald Trump's presidential campaign, was linked to pro-Russian Ukrainians, was Spicer wrong to say that Manafort "played a very limited role for a very limited amount of time" in Trump's run for the White House?

Well, let's ask the very same Sean Spicer. In June, when Manafort took over Trump's campaign and Spicer was the spokesman for the Republican National Committee, he told the Reuters news agency, "Paul's in charge."

Hey, let's cut the flack some slack. "In charge" can mean all sorts of things, right?

Just so no one gets the wrong impression, I am not saying that Donald Trump is anything like Saddam Hussein. And I'm not suggesting that Sean Spicer is as ridiculous as Baghdad Bob.

Bagdad Bob had a pretty tough boss. He had to say what he had to say. Which brings us to CNN's Dana Bash who recently said that Spicer "has to say" what he has to say, "because he knows that he has an audience of one, the president of the United States. At this point, that's really his focus. It's pretty obvious."

Sure, that's easy for Dana Bash to say. What's Sean Spicer supposed to do? Should he go out and tell the White House press corps something like this?: "I know -- and you know -- that President Trump gets a lot of things wrong. I know -- and you know -- he's impulsive and every now and then just plain makes stuff up. I don't like it anymore than you do. I'm just a guy with a family trying to earn a living doing my job -- defending the indefensible. Now, let's go to your questions."

The late Tony Snow, who served as President George W. Bush's press secretary, once said, "If it got to the point where

I thought it would cost me my credibility, I would have no choice but to walk away."

Who knows if Spicer will reach that point and walk away, but he has said, "If you lose the respect and trust of the press corps, then you got nothing."

Finally, something from the president's spokesman that the White House press cops can actually agree with.