Biden Sets Everything on Fire

Ben Shapiro
|
Posted: May 12, 2021 12:01 AM
Share   Tweet
The opinions expressed by columnists are their own and do not necessarily represent the views of Townhall.com. 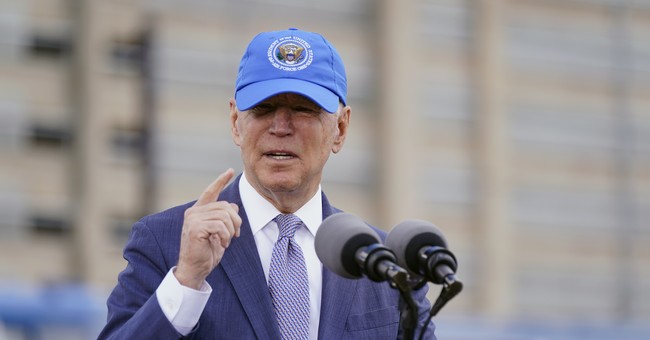 Joe Biden is the luckiest man to ever assume the presidency.

He succeeded an unpopular figure. He was inaugurated just two weeks after the dramatic storming of the U.S. Capitol by extremist Donald Trump supporters seeking to stop the certification of the 2020 election, which was also the beginning of the year after widespread race riots. He inherited COVID-19 vaccines and a vaccine rollout plan, and could rightly expect to ride the tsunami of natural economic recovery that was predicted for the aftermath of the COVID-19 pandemic; he inherited a series of historic Middle Eastern peace deals.

This, after all, was what Americans voted for: not a transformational figure or a figure of radical change but a stodgy, supposedly empathetic grandfather figure who could barely be bothered to leave his basement for the entirety of the presidential campaign. Normalcy could be restored by installing a nearly inanimate object as president.

Instead, Biden has served as a facade for the most radical administration in modern American history. And America is already paying the price.

In his first few months in office, Biden rammed through a $1.9 trillion spending package that completely rewrote the bargain between individuals and the state, shifting the incentive structure for people to go back to work. He simultaneously proposed another $4 trillion in spending -- to go along with the annual $4 trillion budget. The result: skyrocketing inflation in commodities, along with dramatic labor shortages resulting in an April shortfall of three-quarters of a million new jobs.

Simultaneously, he downplayed the efficacy of a vaccine he insisted was the key to ending the pandemic. His Food and Drug Administration pressed pause on a highly successful vaccine based on six cases of blood clots; his Centers for Disease Control and Prevention rewrote its school reopening guidelines, apparently with input from the teachers unions. He wore a mask publicly despite being vaccinated, despite being outdoors, despite being indoors with others who had been vaccinated -- and declared such activity "patriotic." The result: widespread vaccine hesitancy and a tremendously uneven national reopening, with red states going back to normal and blue states continuing nonsensical shutdowns.

He ramped up the rhetoric with regard to racial polarization, injecting the terms "anti-racist" and "equity" into every element of federal policy, supplanting meritocracy and individual rights with equality of outcome and outright discrimination. The result: undercutting police forces nationally, resulting in a continuing crime wave in America's biggest cities.

And he abandoned the Trump administration's Middle East policy, refunding the Palestinians with money that will obviously go to terrorist groups and defy the Taylor Force Act; making concessions to the Iranian terror regime; and pressuring Israel. The result: riots in Jerusalem, chaos on the Temple Mount and an increase in regional Iranian aggression.

We're only four months into Biden's presidency. He's going for broke: He wants his legacy, and if that legacy comes at the cost of the economy, the polis and international stability, so be it. If the conflagration we've seen thus far is any indicator, Biden won't leave a lot standing when he's done.