The Power of Good

Ben Shapiro
|
Posted: Oct 04, 2017 12:01 AM
Share   Tweet
The opinions expressed by columnists are their own and do not necessarily represent the views of Townhall.com. 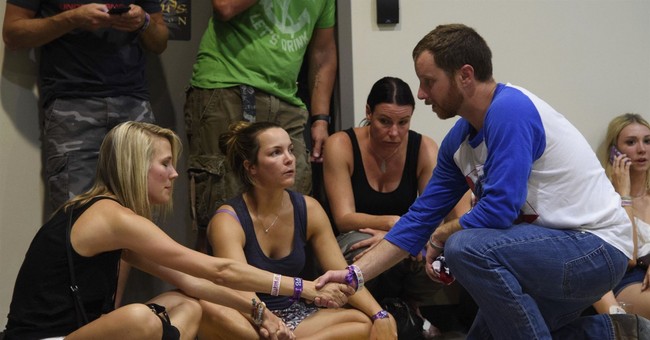 This week, an evil human being murdered nearly 60 Americans and wounded more than 500 others in Las Vegas. His attack was well-planned: The shooter had some 23 guns in his hotel room, including a semi-automatic rifle affixed with a "bump stock" allowing the shooter to operate the rifle like an automatic weapon; he had another 19 guns in his home. Video of the incident is chilling: the rat-a-tat of the gun raining bullets down on unsuspecting innocents from the hulking profile of the Mandalay Bay on the horizon, the wounded concertgoers screaming in the darkness.

But there was heroism, too.

The stranger who threw his body atop Amy McAslin and Krystal Goddard to shield them from the rifle fire. "Just truly incredible," McAslin later said, "a stranger, jumping over me to protect me."

The off-duty nurse from Orange County who told local news that she ran back into the danger to help the wounded: "I'm a nurse and I just felt that I had to ... There was so many people, just normal citizens, doctors, cops, paramedics, nurses, just off duty. ... It was completely horrible, but it was absolutely amazing to see all those people come together."

The anonymous man who threw 18-year-old Addison Short over his shoulder and carried her to safety. The couple who pulled their truck over to carry the wounded to the hospital. The off-duty police using their own bodies to cover the vulnerable. The father who protected his children from gunfire, saying, "They're 20. I'm 53. I lived a good life." Jonathan Smith, a 30-year-old who reportedly saved up to 30 lives, taking a bullet to the neck in the process.

It took hundreds of heroes to save hundreds of people; it took one evil man to wound and kill that many.

On the one hand, it is impossible not to lament the extent of evil: A man attacking those who harmed him in no way, possibly gleefully murdering people attending a concert, makes us wonder at the rot that can infect the human heart. But on the other hand, in each incident of horror we must remember how much the good outweighed the evil. Were there hundreds of people like Stephen Paddock, thousands would have died; were there only one person attempting to stop the impact of Paddock's evil, thousands would have died.

All of which means that as we mourn the victims in Las Vegas, we must also celebrate the heroes. We should see the incident as proof of just how much light infuses America from its citizens -- how many normal people run to help each other when evil strikes, when darkness threatens to divide us. So long as that light continues to unite us, America will emerge ready, as always, to fight that darkness.