What Hurricane Harvey Teaches Us About Humanity

Ben Shapiro
|
Posted: Aug 30, 2017 12:01 AM
Share   Tweet
The opinions expressed by columnists are their own and do not necessarily represent the views of Townhall.com. 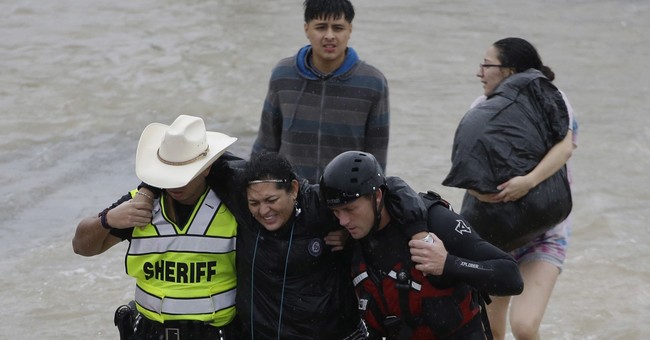 The pictures, videos and social media posts coming out of Houston, Texas, thanks to Hurricane Harvey are horrifying: children camped out on kitchen counters in order to avoid flooding; elderly women stuck in rest homes and up to their waist in water; tweets from local police departments reminding residents to bring axes into their attic in case they have to cut their way through their roof to escape rising waters. But just as many pictures and videos are inspirational: local men and women hopping into their boats and looking for victims to rescue; police carrying children out of flooded houses; Americans helping one another.

Whenever disaster strikes, we're always inspired by images of human beings helping one another. Disaster often brings out the best in us: our capacity for care, our bravery in risking our lives to help others. Then we're inevitably disappointed in our unending ability to leave those qualities behind the moment disaster ends. We'll rush into burning buildings to save each other, but we'll club each other on the head at political rallies.

Because there are certain enemies we hold in common. We hold death in common; we'll help all but our worst enemies escape the grave. We hold natural disasters in common as an enemy; we'll react to them by helping out our neighbors. And we hold civilizational threats in common; we'll fight together against the Nazi scourge or the Soviet threat.

But what about when there is no civilizational threat? What about when we're so powerful that serious threats seem unserious? Former President Obama informed us routinely that radical Islamic terrorism didn't threaten our civilization. It's no wonder, then, that so few Americans see radical Islam as a threat worth unifying against. President Trump tells us that Russia isn't a civilizational threat, and neither is global warming. Without a credible existential threat, Americans don't unify.

But there is a credible existential threat to Americans. The problem is that it's internal.

America was built on the foundation of free speech, liberty in personal action, and freedom from violence and governmental tyranny. Those principles are now under attack by groups like antifa, far-left-leaning militants, which maintains that there is an existential threat that justifies wartime measures: the presence of the American system itself. Antifa members believe America is steeped in racism, bigotry, economic injustice and police barbarity. And they believe that this gives them the right to carve away at the foundations that hold us together.

This makes them an existential threat, a cancer gnawing at the vitals of the nation. They aren't the only ones, of course: Some violent members of the "alt-right," for example, believe that non-white Americans are the existential threat and use the same logic as antifa. But the true threat to America comes not from outside but from within. It's far harder to unify against that threat if we're unwilling to identify it.

But we should be willing to unify. We should all be willing to defend our neighbors in the peaceful expression of their rights -- we should stand with them against violence. We should commit acts of kindness and heroism to help them. There is a storm coming. We must fight it together, or it will overwhelm us while we close our eyes to its danger.