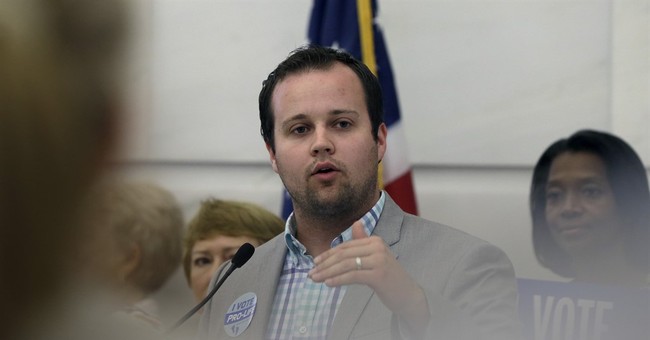 Last week, Internet criminals responsible for hacking the adultery website Ashley Madison released full records of those who registered to use the service. The media began perusing the list -- and naturally, the first major name to hit the media was Josh Duggar. The media busted Duggar several months ago, too, when they released information that the former "19 Kids and Counting" reality star had molested children as a teenager.

The left media finds Duggar's hypocrisy on sexual morality absolutely delicious. The execrable Dan Savage, supposed anti-bullying icon, said that while he generally opposed "outing" adulterers from Ashley Madison -- after all, adultery is a natural part of marriage, according to doorknob-licking Savage - that standard doesn't apply to advocates of Judeo-Christian morality. Savage wrote, "I feel bad for everyone who has been outed by the Ashley Madison hackers -- everyone except Josh Duggar. ... Duggar -- demagogue, liar, political operative -- was a legitimate target for outing." Why? Because, Savage stated, quoting Evan Hurst of Wonkette, "he tried to hurt lots of people, because of how they have sex, which is why it is 100 percent A-OK to take this information and use it to grind that arrogant, fundamentalist pr---'s nuts into a fine powder so that we may snort it up and trip holy karmic balls."

One of the great problems with modern American political and moral discussion lies in our hatred for hypocrisy above all other sins. Adultery, according to Savage and his anti-moral moralists, isn't a sin; rather, preaching against adultery and then failing your own standard is the great sin. But that makes all standards irrelevant. This logic sets up a perverse moral system whereby those without standards freely pursue whatever activities they choose, while those with standards are destroyed for their sins. The result: rational people choose to embrace amorality, secure in the knowledge that without standards, they will never be held to account. Bill Clinton can allegedly rape a woman and sexually harass several others, and he will never feel the wrath of the left: he does not promote sexual decency. But Newt Gingrich will never hear the end of his affair with Callista Bisek because he had the temerity to question Clinton's sexual peccadillos in the Oval Office.

The war on hypocrites isn't a war on sin: it's a war on standards. Josh Duggar may be an evil human being, but his evil springs not from the standards he attempted to preach, but from his failure to meet those standards. The left's backward obsession with Duggar shows their true hypocrisy: They violate all of their own standards in order to target someone with a different set of values. They are against outing, unless they want to utilize it to fight their enemies; they are in favor of adultery, unless it's convenient to use adultery as a club against their opponents; they're against sexual judgmentalism, unless they can use sexual judgmentalism to bash those loyal to Judeo-Christian beliefs.

Josh Duggar deserves to pay for his sins, and pay richly. He's vile. But those who fight against basic standards of morality don't have any moral authority to act as the agents of that judgment. For such jackals to play at such judgment smacks of the same hypocrisy they condemn.