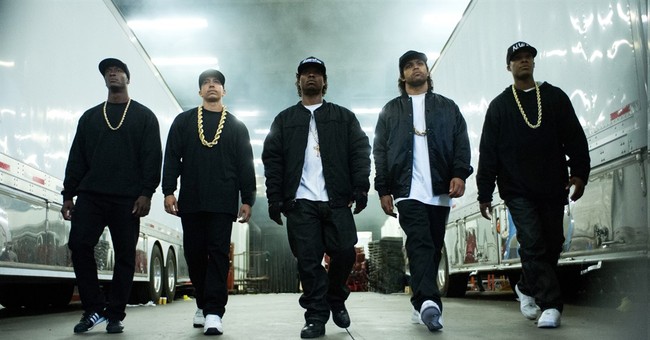 Over the weekend, the hagiographic film "Straight Outta Compton" pulled in $60 million at the box office. The film follows the trials and travails -- but not the woman-beating, gay-bashing, violence-promoting activities -- of NWA, the iconic rage hip-hop group made most famous by their anthem, "F--- Tha Police." The theme of the film, according to reviewers, centers on the evils of the Los Angeles Police Department and white authority. Paul Giamatti, playing Paul Giamatti on steroids, screams at a group of stock-casting cops, "You cannot harass my clients because of what they look like!" He tells the group, "You have a unique voice. The world needs to hear it."

But while the world may hear this whitewashed version of NWA's nastiness -- after all, Ice Cube now plays cops on TV rather than cursing them -- the movie won't be seen in one place: Compton itself. According to CBS Los Angeles, Compton has no movie theaters. "It's a low income area, it's been heavily dis-invested in," says USC professor of sociology Manual Pastor. "When you live in a community that doesn't have that kind of retail, it's a sign that the community is devalued and people within the community feel devalued."

Compton doesn't lack a theater because of a feeling of victimhood. It lacks a theater because Compton overflows with crime. According to Neighborhood Scout, Compton's violent crime rate is 12.87 per 1,000 residents; chances of being victimized by a crime stand at 1 in 78, as opposed to 1 in 249 across California as a whole. The murder rate is reportedly 37 per 100,000 in Compton; the murder rate in the United States is less than 5 per 100,000.

So much for NWA changing the world.

NWA merely reiterated the anti-police propaganda that has kept inner city communities enmeshed in brutality and poverty for generations. Jill Loevy, reporter for The Los Angeles Times, describes in agonizing detail the lack of law and order in South Central Los Angeles, which covers Compton. She talks about how the police are underfunded in such areas, how witnesses are cowed into silence, how informal mechanisms of authority -- gangs -- fill the gap. "Residents would still holler 'One time!' at the cops," she writes. "The term derived from the memory of police touring black neighborhoods once a day, making no real effort to address crime. 'One time' was a stock anticop insult, just like 'po-po' and 'blue-eyed devil.' Yet it contained a plaintive note -- a paradoxical suggestion that more times might be better."

The 14th Amendment to the Constitution, which contains the critical mandate for "equal protection of the laws," was designed to stop selective prosecution. The Civil Rights Act of 1866, the precursor to the 14th Amendment, explicitly stated that citizens -- more specifically, black citizens -- had to have "full and equal benefit of all laws and proceedings for the security of persons and property ... and shall be subject to like punishment, pains and penalties, and to none other." Leaving parts of America unpoliced, the Radical Republicans who wrote the 14th Amendment understood, placed them squarely in the lap of chaos.

Today, Compton's murder rate looks more like that of war zones than that of a modern American city. That's because any area in which no one enforces law and property rights devolves into pandemonium. Hollywood can glorify NWA; the Democratic Party can humor the counterproductive, criminal-glorifying Black Lives Matter movement. None of it will solve the underlying problem in heavily black inner city areas. Leaving black Americans at the mercy of lawlessness used to be a mandate of racism; now it's a mandate of political correctness. No matter who pushes that agenda, the outcome is the same: disaster.