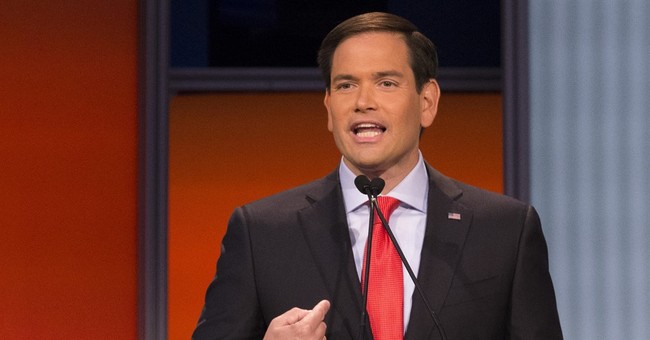 Trending
During last Thursday night's inaugural 2016 Republican presidential debate, Fox News' Megyn Kelly got into a spat with Donald Trump over his history of vulgar comments about women. Trump followed up that tiff by dropping a thinly veiled reference to Kelly's menstruation in the media. Those comments prompted Democratic frontrunner Hillary Clinton to praise Kelly -- a woman with whom she would never deign to do an interview -- bash Trump, and then lash out at Senator Marco Rubio, R-Fla., whom she perceives as the most serious threat to her presidential aspirations.

"Yes, I know [Trump] makes great TV," said Clinton. "I think the guy went way overboard - offensive, outrageous, pick your adjective. But what Marco Rubio said has as much of an impact in terms of where the Republican Party is today as anybody else on that stage."

What, pray tell, was Rubio's great sin? He said that he believed the Constitution protects the unborn: "What I have advocated is that we pass law in this country that says all human life at every stage of development is worthy of protection. In fact, I think that law already exists. It is called the Constitution of the United States."

According to Clinton and her allies in the media, this makes Rubio -- and any Republican who agrees with him -- too extreme for the general public. And it's not just abortion. Polls show that 52 percent of Americans say that the Republican Party is more "extreme" in its positions than the Democratic Party; just 35 percent say the reverse.

But is that true?

On abortion, for example, the Republican Party platform states that the Constitution warrants protections for the unborn; the Democratic Party position states that taxpayers should foot the bill for the killing of unborn children at every stage of pregnancy, including partial-birth abortion, a gruesome procedure in which children are pulled feet-first out of their mother's wombs, their skulls pried open and brains sucked out. Then the Democrats want to fund Planned Parenthood to carve up those babies for organ sale. Which position is more extreme?

On same-sex marriage, the Republican Party wants to pass a Constitutional amendment to enshrine traditional marriage as the only governmentally rewarded form of marriage; until such time, Republicans acknowledge that same-sex marriage is legally a state's rights issue. The Democratic Party wants to force religious Americans to participate in homosexual weddings without recourse to the Constitution. Which is more extreme?

On health care, Republicans want Americans to be able to choose the healthcare they receive and pay for; Democrats want to force Americans to pay into a system from which they receive less than they would if they expended their dollars privately. Extremism, anyone?

Yet the media portray Republicans as the extremists. That rhetorical trick has its desired effect: Republicans are seen as nasty and unpleasant, even while Democrats move so far to the left that an open socialist is now their second leading contender for the presidency. Republicans counter by insisting that they are kind and generous, wonderfully moderate. This strategy is destined to fail. But Republicans have no idea how to fight extremists, even as the left portrays them consistently as America's most extreme political party.