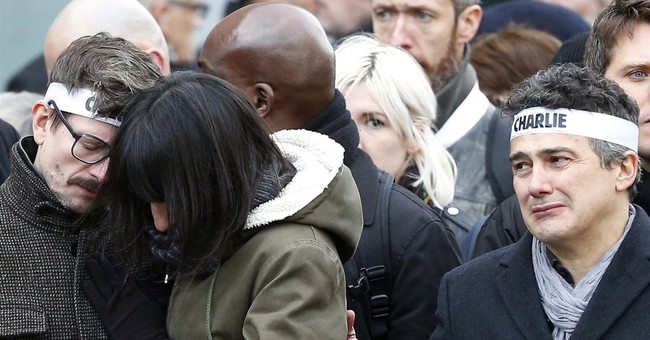 The West has the capacity to win a war on radical Islam. But it won't.

It won't because the West is too busy soul-searching to defend its core values. Western leaders mouth slogans about #JeSuisCharlie in the aftermath of the murder of 12 at the Charlie Hebdo headquarters, but they don't mean it; they suggest that the world stands united against radical Islamic terror even as they ignore the bullet-ridden bodies of four at a kosher supermarket in Paris.

The proof: Look at the list of those who attended Sunday's unity march in Paris.

The usual suspects showed up, except for President Obama, who was presumably too busy golfing or watching football. So, too, did several leaders explicitly connected with radical Islam and terrorism.

Palestinian Authority President Mahmoud Abbas, showed up to tell the French people, "Human life is sacred and God has created us all." But that's not what he tells his constituents. Last week, Al-Asima, a publication distributed by the Palestinian Authority, celebrated the murderers of five people at a synagogue in Jerusalem. Abbas routinely meets with terrorists who are released from prison after murdering Jews. As Hamas rained rockets down on Israel, Abbas justified it, telling the United Nations that Palestinians had the "legitimate right to resist this colonial, racist Israeli occupation."

But those are just dead Jews, so welcome to France!

Then there's Turkish Prime Minister Ahmet Davutoglu, who represents a regime that has provided material support to Hamas, including the infamous terror flotilla. Turkey's leader, Recep Tayyip Erdogan, says that the very term "moderate Islam" is "very ugly, it is offensive and an insult to our religion. There is no moderate or immoderate Islam. Islam is Islam and that's it." Turkey's refusal to fight ISIS has led to the rise of that terror group as well.

Sheikh Abdullah bin Zayed al-Nahyan of the United Arab Emirates came to Paris as well. Harvard University rejected Al-Nahyan's $2.5 million donation in 2004 after it emerged that al-Nahyan was associated with a think tank that pushed anti-American and anti-Semitic diatribes.

All three of these regimes, by the way, believe that blasphemy against Mohammed should be criminalized. Allowing them to march in honor of Charlie Hebdo demonstrates the moral idiocy of the West.

But the media hailed the march, nonetheless, as a ground shift in world relations. After all, so many leaders had linked arms in a pro forma tribute to free speech, it just had to mean something.

Except that it doesn't. It doesn't mean a damn thing. It means only that the West is too stupid or empty-hearted to stand up for its principles; we will welcome anyone to our club, even those who want to join the club only to burn it down.

That, in a nutshell, is the problem with the West's policy with regard to radical Islam. When I asked Islamic imam Anjem Choudary -- a man who has essentially defended the Charlie Hebdo terrorists -- why the West should allow him to live in Britain while attempting to tear down all of its values, he simply stated that he was born in England. He then added, "You can change your laws," and threatened that if no laws were changed to ban material like that of Charlie Hebdo, there would certainly be a "bloodbath."

And the West agrees. Anyone can join our free speech marches, our freedom of religion candlelight vigils -- even people who would blow up both of them at the first available opportunity.