The Suicidal Hashtags of the West 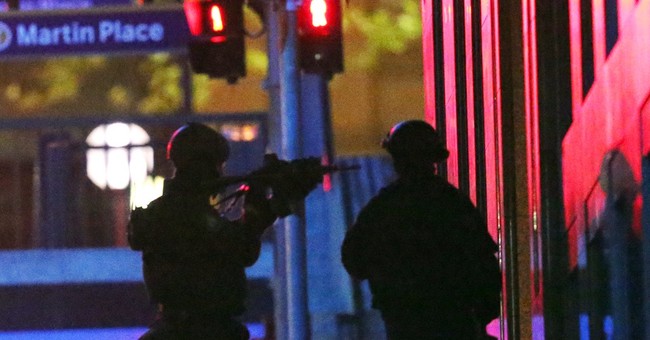 On Monday, Australian police stormed the Lindt Chocolate Cafe in Sydney, where an Islamist terrorist named Man Haron Monis had taken dozens of hostages and held them for 17 hours. Three people were killed, including Monis, and several others were wounded. Monis, an Iranian immigrant, had a long criminal record, including 40 charges for indecent and sexual assault, as well as an outstanding charge for accessory to murder in the killing of his ex-wife. Before his death, Monis requested an ISIS flag, and forced hostages to hold up the so-called Shahada flag, which proclaims in Arabic, "There Is No God But Allah, and Muhammad Is His Messenger."

In response to this Islamist terror attack on a civilian hub in the center of their city, Australians all over the country took action: They tweeted with the hashtag #illridewithyou. This hashtag came from the mind of one Rachel Jacobs, who witnessed a Muslim woman removing her hijab on the local train after the news of the hostage situation broke. Jacobs tweeted, "I ran after her at the train station. I said 'put it back on. I'll walk with u'. She started to cry and hugged me for about a minute -- then walked off alone." Soon, the hashtag had been launched, and quickly trended globally.

Never mind that nobody had said a word to the woman in the hijab -- pre-emptive anti-Islamophobia was the first response to an Islamist taking Western hostages in a Western capital.

Across the globe, in the United States, two dueling hashtags debated the relative guilt of American law enforcement. After New York City man Eric Garner resisted arrest, and then died thanks to his pre-existing health conditions after being taken down by police, the hashtag #ICantBreathe went viral. That hashtag fought for prominence with one dedicated to Michael Brown, the 18-year-old black man who was shot to death after attempting to take a gun from a police officer and charging the police officer: #HandsUpDontShoot. Never mind that the first hashtag was taken wildly out of context -- Garner was not choked to death -- and that the second was completely fictitious -- autopsy showed Brown did not have his hands up when he was shot.

These hashtags aren't just the work of lazy activists with nothing better to do. They're signifiers of a suicidal west that believes it bears bloodguilt. No real allegations of Islamophobia or racism are necessary -- those can be assumed. We immediately go into preliminary disassociation mode, attempting to demonstrate to our friends and neighbors that while our civilization may be Islamophobic and racist, we are not. After all, we even tweeted using the day's popular hashtag!

Here's the problem: Islamists don't care about hashtags when they can take hostages and earn the sympathetic hashtags of others. Those who resist law enforcement or attack police officers outright are happy to do so when they become causes celebre, no matter what they do wrong.

The West has its evils. There are instances of racism and Islamophobia. Nobody with a brain would deny that. But to slander the West with a sort of communal guilt for an Original Sin, even as the West is under fire from those who would seek to destroy its civilizational foundations, is nothing less than barbaric.