The Real Racist Conspiracy In Ferguson 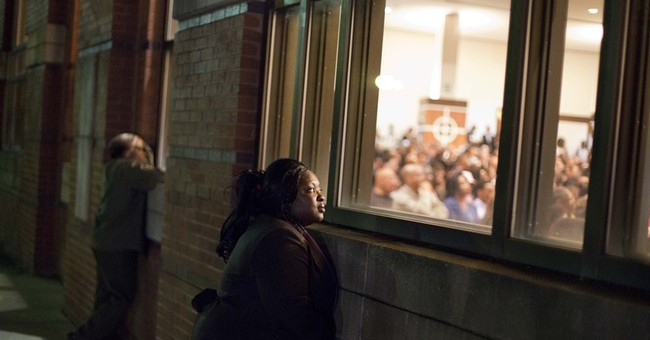 After a grand jury in St. Louis, Missouri, voted against the indictment of Officer Darren Wilson in the killing of 18-year-old black man Michael Brown, President Obama gave a short address to the nation. In it, he said he understood why some would feel disappointed at the verdict -- an odd statement, given that all available evidence showed that Brown had robbed a convenience store, attacked Wilson in his vehicle, attempted to grab his gun and charged Wilson before Wilson shot him.

Then Obama dropped a doozy: "We need to recognize that this is not just an issue in Ferguson, this is an issue for America ... there are problems and communities of color aren't just making these problems up."

Obama did not specify what problems he wanted to discuss. Nor did he explain why Ferguson's issues were America's. But the largest lie was the notion that "communities of color" don't make problems up.

Because in Ferguson, that's precisely what a community of color did.

In the immediate aftermath of the Brown shooting, grand jury documents show, witness intimidation and lying became the order of the day. Witness after witness told police that local thugs were intimidating those who had seen the events. One witness told police, according to the St. Louis Police Investigative Report, that threats "had been made to the residents of Canfield Green Apartment Complex." This witness said that "notes had been posted on various apartment buildings threatening people not to talk to the police, and gunshots were still being fired every night."

The witness wasn't alone. Other witnesses stated that supposed witnesses were lying to the media about events, that others who had seen the events were "embellishing their stories" in order to convict Wilson. One witness stated, "You have to understand the mentality of some of these young guys they have nothing to do. When they can latch on the something they embellish it because they want something to do."

Some 16 witnesses testified that Brown's hands were up when he was shot, which was factually false according to the autopsy. Another 12 witnesses said that Wilson shot Brown from behind -- again, false according to the autopsy. One witness testified that Wilson used both a Taser and a gun -- false. Another said that Brown had kneeled before Wilson shot him. When confronted with the fact that the physical evidence made such an account impossible, the witness acknowledged he hadn't seen the event, and then asked if he could leave the grand jury because he was "uncomfortable."

In 1964, Kitty Genovese was stabbed to death outside her apartment complex in New York. The entire nation gasped in horror when it learned that supposed witnesses had not called the police.

Fifty years later, the nation completely ignores the fact that an entire community apparently lied, facilitated lying or intimidated witnesses in order to put an innocent man behind bars, because he happened to be white. At least Kitty Genovese's neighbors didn't actually murder her. Members of the Ferguson community tried to murder Darren Wilson by putting him on death row. Meanwhile, President Obama and those in the media who played up the original narrative cheered them on.