The Great Racial Disconnect on Police 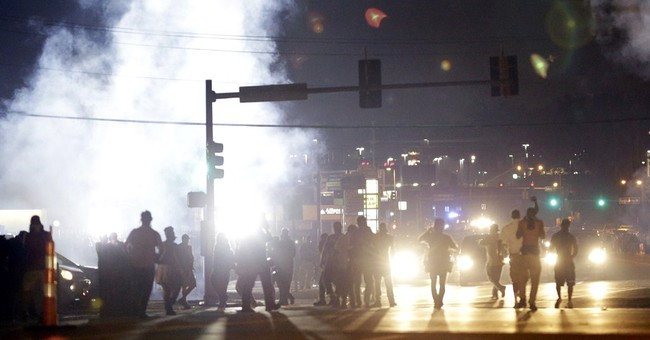 On Monday, Rasmussen released a poll of Americans regarding the guilt or innocence of Officer Darren Wilson, the police officer who shot unarmed 18-year-old black man Michael Brown six times in Ferguson, Missouri. Those polls show that 57 percent of black adults think that Wilson should be found guilty of murder; 56 percent of whites, by contrast, are undecided on the matter.

The latter position is the correct one. Witnesses, including one Dorian Johnson, claim that Brown was pulled over by Wilson, attacked by him and pulled into the car, ran, stopped when told to freeze by Wilson, held up his hands, and was then shot. Other witnesses -- more than a dozen of them, according to local media -- say that Brown attacked Wilson, went for Wilson's gun, fled before being told to stop, then charged Wilson before being shot.

Here's what we do know: Despite original media reports labeling Brown a "gentle giant," Brown and shooting witness Dorian Johnson did participate in a strong-arm robbery of a local convenience store. We know that despite original witness reports suggesting that Brown was shot in the back, he was not. We know that contemporaneous witness accounts caught on tape suggest that Brown charged at Wilson. And we know that a young black man is dead with six bullets in him at the hands of a white cop.

And to huge segments of the black community, that last fact is the only one that matters. The full facts do not matter to extremists in the black community and to their white leftist enablers, particularly in the media. A full 41 percent of black Americans believe that riots and looting represent "legitimate outrage." Not protesting -- riots and looting. Just 35 percent of blacks think that looters and rioters are criminals taking advantage of the situation.

There is a pattern here: a widespread belief in the black community that the justice system is rigged against them. That belief is not without basis -- there is no question that America has a history of racism within the criminal justice community. By the same token, there is also no question that American law enforcement is the least racist it has ever been, by a long shot, and that racism within the law enforcement community is broadly considered unacceptable and vile.

But the belief in a racist justice system seems to have maintained its stranglehold inside the black community. That belief, taken to its extreme, means support for black criminality. It is no coincidence that during the O.J. Simpson trial, 60 percent of black Americans did not believe O.J. was guilty. It is also no coincidence that many white Americans perceive black support for murderers like O.J. Simpson and riots in Ferguson as support for lawlessness, and therefore pooh-pooh charges of police racism. When crying racism becomes crying wolf, it is hard to take such charges seriously.

The solution, however, lays neither in knee-jerk accusations of racism from the black community nor in immediate dismissals of individual accusations by the white community. It lies in continued targeting and prosecution of individual racists in the police community, of course -- and far more importantly, it lies in less criminality within the black community. The high levels of crime in the black community contribute to heavier policing, which in turn reinforces perceptions of racial targeting; those perceptions then create resentment against police than ends too often in violent encounters and failure to report crime. And so the cycle starts anew.

It's time to break the cycle. The only way to do that is to focus on the fact that police have no excuse to shoot anyone unless those people are committing criminal acts. On that we can all agree. Yes, we must arduously insist that police hold to that standard, and we must prosecute those who do not to the fullest extent of the law. But by the same token, we must insist that criminal acts stop -- and to do that, we must move beyond simple anti-police sentiment.