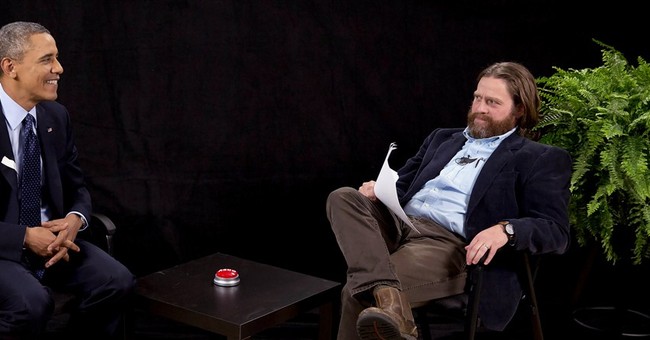 For years, conservatives have puzzled over President Barack Obama's continued personal popularity in the face of his dramatically uninspiring performance as commander-in-chief. Obama seems to inspire a bizarre personal loyalty among his advocates, particularly among young people who should by all rights be concerned with their fading futures and collapsing prospects. Why do his numbers remain so stubbornly mediocre?

The answer came Tuesday in the form of a ridiculous video cut by Obama with the help of "The Hangover" star Zach Galifianakis and the online outlet Funny or Die. Funny or Die is in the viral video business; it often features celebrities in bizarre skits designed to draw clicks. But Funny or Die also has a political agenda: In September, the Los Angeles Times reported that Funny or Die honcho Mike Farah had become an integral part of "the campaign to ensure the success of President Obama's healthcare law." Obama enlisted Farah in July 2013 during a meeting with Hollywood bigwigs in which Obama recruited his arts team to rally to the Obamacare cause.

The video, the latest in an ongoing series of episodes of a faux talk show titled "Between Two Ferns," has Galifianakis interviewing Obama about Obamacare. The portly actor, best known for playing a moron in movies, asks Obama questions about whether he will miss winning at basketball when he is no longer president. Obama, on script, answers by getting testy with Galifianakis before pushing Obamacare with his usual lack of verve: "Healthcare.gov works great now. And millions of Americans have already gotten health care plans. And what we want is for people to know that you can get affordable health care."

That wasn't Obama's only major media appearance this week. Obama also introduced the Fox reboot of the miniseries "Cosmos," explaining to Americans that hope and change could still be attained through science: "America has always been a nation of fearless explorers who dream big and reach farther than others might imagine." Which sounds better than "America has always been a nation of close-minded bigots requiring the intervention of government to force them into tolerance and diversity."

Obama's pop-cultural focus may seem demeaning to the office of the presidency. It may be mockable. But it is also tremendously effective. In the first 24 hours alone, the "Between Two Ferns" segment received almost 8 million views; approximately 20,000 people visited Healthcare.gov directly from the watching the segment. That's not bad for a pure propaganda effort.

Conservatives must understand that culture is the lifeblood of politics. Most Republicans have no idea what Funny or Die is, let alone why people watch it. BuzzFeed is a dirty word to most conservatives, even though their sons and daughters read it regularly for its cat lists -- and some of them stay for the leftist politics. Obama gets culture, or at least does a serviceable job of pretending he does. His shock troops in the entertainment industry are willing to do the rest on behalf of the Obama agenda.