If You Disagree With Obama, Are You Anti-American? 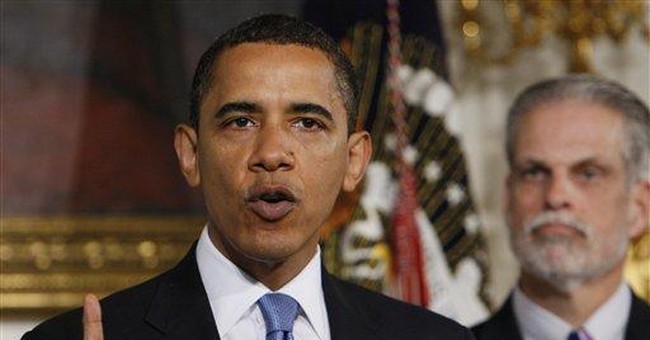 If you attack President Barack Obama’s policies, are you attacking America?

According to today’s left, the answer is yes: Barack Obama is America. And opposition to Barack Obama or any of his policies is therefore, by definition, anti-American. Just listen to alleged comedienne Wanda Sykes at the White House Correspondents Dinner this past week: "Rush Limbaugh said he hopes this administration fails … He just wants the country to fail. To me, that’s treason. He’s not saying anything differently than what Osama bin Laden is saying."

Every tyranny begins with a few simple steps. First, the budding tyranny takes far-reaching control of the economy in the name of the people -- what syndicated radio host Jerry Doyle has called "economic fascism." Often, such economic fascism begins with talk about speculators. "Until we apply terror to speculators -- shooting on the spot -- we won’t get anywhere," Lenin said in 1918. Hitler directed the Nazi electoral platform against "Jewish speculators" in 1928. Today, Obama derides investors in Chrysler as "a small group of speculators," bluntly stating, "I don’t stand with them."

Second, the budding tyrant identifies personal insults as insults to the country. In 1924, upon Lenin’s death, Joseph Stalin famously demanded personal loyalty to Lenin’s memory from the unfortunates living under Soviet rule: "We swear to you, comrade Lenin, that we will not spare our lives in order to strengthen the union of the working people of the entire world -- the communist international!" In 1934, Hitler forced German soldiers and civil servants to take oaths proclaiming allegiance to him personally.

Today, Obama and his followers demonize anyone who challenges the Obama agenda as unpatriotic traitors to the country. Even leaving aside U.S. Department of Homeland Security Director Janet Napolitano’s egregious report on the threat of "right-wing extremism," Obama’s targeting of Rush Limbaugh, and the likely Obama-influenced United Kingdom banning of radio talk show host Michael Savage, Obama’s entire persona is geared toward his personal elevation. His website, BarackObama.com, continues to run apace despite his elevation to the presidency -- only now, the focus of the website is "Organizing for America." The website leads off with this Leninesque quote from Obama: "I’m asking you to believe. Not just in my ability to bring about real change in Washington … I’m asking you to believe in yours."

"Organizing for America" is run by David Plouffe, Obama’s campaign manager, who has purposefully stayed out of the White House in order to maximize his capability to mobilize Obama’s campaign base. Those who sign up for "Organizing for America" are instructed to go door to door to persuade neighbors to sign petitions in favor of the Obama agenda -- not because they believe in Obama’s policies, but because Obama is asking America to "believe … in my ability."

Obama’s foreign policy is similarly self-centered. He has leveraged his personal appeal by shaking hands with Venezuelan President Hugo Chavez, giving exclusive interviews to Al-Arabiya, and sending video messages to the Iranian people. He has spoken to cheering throngs throughout Europe. His supporters proclaim that Obama has raised America’s prestige around the globe. But polls demonstrate that while Obama is personally popular in Muslim countries like Jordan (58 percent think he will have a positive impact on the Middle East), Saudi Arabia (53 percent), United Arab Emirates (52 percent), Kuwait (47 percent) and Lebanon (43 percent), the United States is not nearly as popular: only 38 percent of Saudis have a favorable view of the U.S., with 36 percent of Jordanians approving, 34 percent of United Arab Emirates residents, and 31 percent of Lebanese. The rest of the world recognizes that Obama’s policies are separable from the United States’ policies and political philosophies more broadly. Obama does not.

Despite certain early warning signs of incipient tyranny, the Obama administration is not Hitlerian or Leninesque. They are still bound by the dictates of the republican electoral system. We must guard those dictates especially carefully, however, in a time when the Cult of Obama casually suggests that disagreement with the Great Leader is tantamount to anti-Americanism.