The Obama Doctrine: "Don't Blame Me" 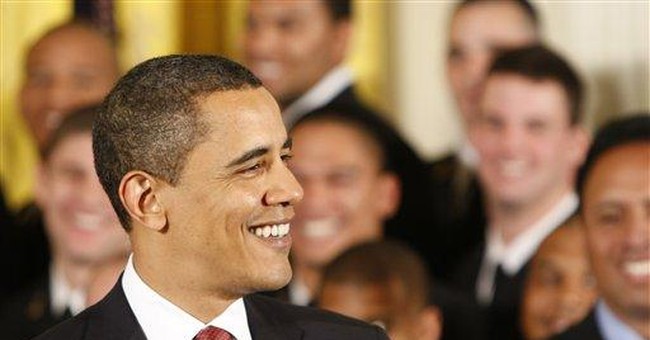 President Barack Obama’s recent foreign policy triumphs have his supporters cheering. From his European tour, where he apologized for American arrogance, to his most recent trip to Latin America, where he gladly accepted an anti-American screed from Hugo Chavez, Obama has soared from triumph to triumph.

At least that’s what E.J. Dionne of the Washington Post would have us believe. This week, Dionne celebrated Obama by enshrining what he calls “the Obama Doctrine,” in which America “seeks to regain the world’s sympathy by acknowledging that while the United States is a great nation built on worthy principles, it is not perfect.”

There’s a shorter way to phrase the Obama Doctrine: “Don’t blame me.”

On Saturday, t the Summit of the Americas in Trinidad and Tobago, Daniel Ortega spoke for 50 minutes. In his filibuster, Ortega bragged about Central America’s opposition to U.S. foreign policy: “We all got together, united so we could defeat the expansionist policy of the United States.”

Obama responded with patriotic fervor, defending his country. Or not. “I’m grateful President Ortega did not blame me for things that happened when I was three months old,” President Obama mewled. In short: don’t blame me.

It’s an answer that echoes back to the 2008 campaign. When Obama was questioned about his association with unrepentant terrorist Bill Ayers, he famously scoffed, “I was 8 years old.” In short: don’t blame me.

In Obama’s own mind, the globe began spinning only with his glorious exit from Ann Dunham’s uterus. He can’t be blamed for things that happened when he was a child; after all, how was he supposed to stop Bill Ayers from blowing things up, or JFK from botching the Bay of Pigs? He can’t even be blamed for subsidizing Ayers’ terrorist sympathizing or Ortega’s dictatorial ranting -- after all, he can’t rewrite history, can he? Hence the Obama Doctrine: it wasn’t me. I’m busy junking America’s philosophical past, says Obama. Give me a few years to remake America. Then we’ll talk.

Obama seems to believe that if he just discards American history -- if he apologizes for our actions in Europe, in Latin America, in the Muslim world -- the rest of the world will offer America a clean slate. That demonstrates, first and foremost, a tremendous lack of pride in America’s legacy of freedom and liberty around the globe. America generally needs a clean slate far less than any other country on the face of the earth.

Secondly, the Obama Doctrine demonstrates Obama’s massively overweening sense of self-importance. Foreign leaders are not idiots -- if they sense they can elicit concessions from America simply by inflating Obama’s confidence, they’ll do it. Even assuming Obama’s supposed international popularity, that popularity does not translate into a better international deal for America. Foreign leaders can stroke Obama’s ego while undermining America’s strength in the world. The world’s fawning patronage of Barack Obama does not mean the world will treat America as an ally.

That is because nations view each other historically, not based on what they’ve done the past few months. Viewing Germany as a peaceful socialistic country, ignoring its fascist past, would fail to explain their panoply of foreign and domestic policies. Viewing Russia as a corrupt mobocracy ignores its undercurrents of communistic thuggery, relics of the Soviet era.

The Obama Doctrine is Obama’s suggestion to the world that he is more representative of the New America than American history itself. The Obama Doctrine states that Obama’s election has completely redefined America. America’s philosophical roots have been hewn away, replaced with the more humble conciliation of Obamaism.

The Obama Doctrine is a mea culpa for America from a self-obsessed president who puts himself before country. And it’s a godsend for America’s enemies.