The Never-Ending Bailout and the End of American Economic Dominance 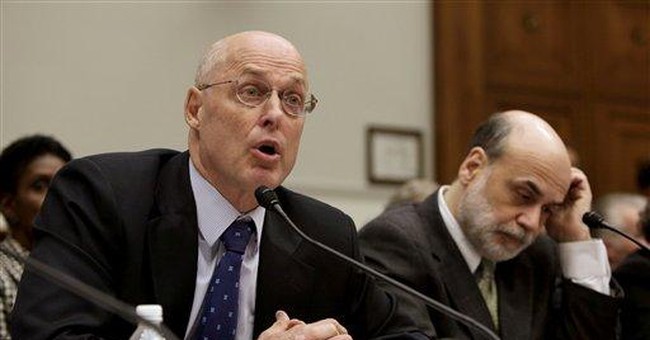 Our political leadership -- folks like President George W. Bush, Treasury Secretary Henry Paulson, Rep. Barney Frank, D-Mass., Sen. John McCain, R-Ariz., and President-elect Barack Obama -- told us that the government would save us. They said that the economic crisis was so dire, so grim, that we needed to allow the government to spend our money to bail out Wall Street. They stated that Paulson, with full authority and no oversight, would be able to right the ship.

We were ignorant enough to believe them.

Now they tell us that Paulson has exercised his authority recklessly. They say that they want their oversight back. They state that they need more cash for bailouts, and they need more leeway to create new regulatory schemes.

Will we be stupid enough to believe them again?

So far, the federal bailout, which was designed to jumpstart lending, has cost $300 billion and produced no effect. This is not a surprise. Lenders are rational actors. They tightened lending standards because they were hit hard by the subprime crisis -- a crisis caused by lax lending standards. But instead of seeing stricter lending standards and occasional bankruptcies as the natural outgrowth of bad decisions, the government panicked. The credit had to flow, our politicians told us. And the best way to make the credit flow was to hand over more cash to lenders.

This, of course, was sheer idiocy. Handing lenders money wasnt going to get them to loosen lending standards again. That money was earmarked for lenders savings from the moment they received it -- lenders first priority is to their stockholders, who want to see profit margin, not more bad loans.

Heres something thats too big to fail: Americas entrepreneurial spirit. But no one seems to care about that. Instead, were supposed to worry about the risky lenders who bet wrong on the market; the risky borrowers who took mortgages they could never pay; and the risky investors who counted on both risky lenders and risky borrowers to keep the waterwheel of cash turning. In doing so, we ignore those who could actually heal the economy: solid lenders, solid borrowers and smart investors who will pick up the pieces of broken businesses and lead the way. But they dont matter. Instead, say the politicians, we should focus on GM. We should focus on Lehman Brothers. We should focus on the failures. And we should bail them out.

If we do, we will pay the price of a prolonged recession.

These bailouts also have psychological costs that breed dependency. Paulson is fond of saying that he wants to be wary of moral hazard the idea that we must not give incentives for bad behavior but then pushes rewarding reckless companies with taxpayer handouts. Meanwhile, both Democrats and Republicans recommend rewarding risky borrowers by keeping them in the houses they cant pay for. How long will it be before folks stop paying their credit card bills and mortgages altogether, hoping that the government will step in to save them?

What we are watching is Carter-esque interference with the economy. President Bushs handling of this economic debacle will go down as the biggest black mark on his legacy. While supposedly touting the importance of capitalism, Bush has embraced the same Keynesian solutions that trashed the economy during the 1930s and 1970s. And both Republicans and Democrats go right along with him, psychotically citing the Great Depression while ignoring the basic fact that Presidents Herbert Hoover and Franklin Delano Roosevelts tinkering made a depression into the Great Depression.

The bailout is a disaster. And the politicians will continue fostering this disaster until the American people say, Enough. We dont need your help. We will do this ourselves.