Some Jews Ain't So Smart 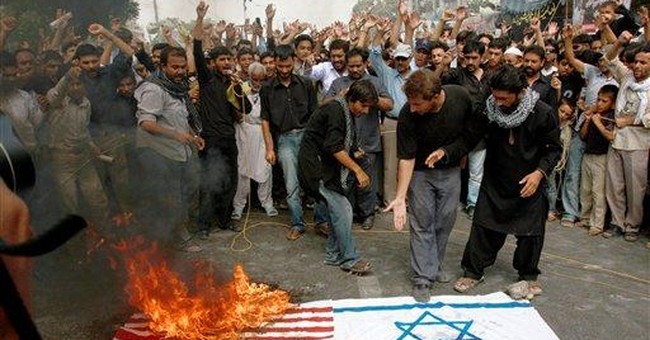 Jews, according to both anti-Semites and philo-Semites, are smart folks. Anti-Semites claim that Jews are highly intelligent -- and therefore threaten the world via conspiratorial monetary and political control. Philo-Semites point out that Jews have provided a vastly disproportionate number of Nobel Prize winners, as well as various leading scientists, philosophers, writers and artists.

Virtually everyone agrees, then, that Jews are intelligent. And yet for all of our intelligence (I am an Orthodox Jew), large groups of American Jews lack the most basic instinct for self-preservation; they lack the understanding to protect Jews by acting to protect Israel.

The non-religious Jewish community demonstrates particular blindness. Most non-religious Jews, who see no special value in Jewish identity, distract themselves with "social justice" policies -- policies like abortion-on-demand and gay marriage -- that directly contravene traditional Jewish values. Meanwhile, they ignore existential threats to Jews worldwide -- threats they cannot escape with protestations that they aren't practicing Jews, or that their Judaism only goes as far as the occasional bagel. For many non-religious Jews, political liberalism trumps both Jewish values and Jewish existence.

How else to explain the disastrous series of events last week in New York? The United Jewish Appeal Federation of New York scheduled an anti-Iran rally highlighting the blatant Jew-hatred of visiting Iranian president Mahmoud Ahmadinejad. The Federation invited both Senator Hillary Clinton (D-NY) and Republican vice presidential candidate Sarah Palin (R-AK). Palin accepted. So, at first, did Clinton -- but when she learned that she would be appearing on the same stage as Palin, she backed out.

At that point, the organizers of the rally made a terrible decision: They disinvited Palin. Politico.com reported that the decision was made after Democrats complained that they did not want the rally turned into a partisan event.

This is the height of idiocy. In the possibility of a nuclear Iran, Jews face the gravest menace since the 1973 Yom Kippur War. They must mobilize every ally, unearth every friend, in order to create a groundswell of support for a military strike against Iran by Israel -- the only true solution to Iranian nuclear ambition. And yet they turned away Sarah Palin -- perhaps the future vice president of the United States, and at the moment, the most popular female politician in the United States -- because they feared offending Democrats.

Only a baseline allegiance to the Democratic Party -- only a deep-rooted leftist partisanship -- can explain such behavior. Any rational group, seeking to draw attention to the Iranian situation, would leap at the opportunity to host Palin, who routinely draws tens of thousands of fans.

Instead, the organizers disinvited Palin. In doing so, they demonstrated a political bias unworthy of a pro-Israel organization. More than that: In rejecting Palin, they demonstrated loyalty to Democrats over loyalty to Jewish causes. That became especially clear when the text of Palin's un-given speech was released. "We gather here today to highlight the Iranian dictator's intentions and to call for action to thwart him," the speech reads. "He must be stopped. The world must awake to the threat this man poses to all of us. Ahmadinejad denies that the Holocaust ever took place. He dreams of being an agent in a 'Final Solution' -- the elimination of the Jewish people. He has called Israel a 'stinking corpse' that is 'on its way to annihilation.' … Iran should not be allowed to acquire nuclear weapons. Period. And in a single voice, we must be loud enough for the whole world to hear: Stop Iran!"

This is strong stuff. And it is stuff that the rally organizers abandoned when they kowtowed to Democrats rather than recognizing that support for Israel must be a non-partisan issue. It was foolish. It was dangerous. And most of all, it was dishonorable.