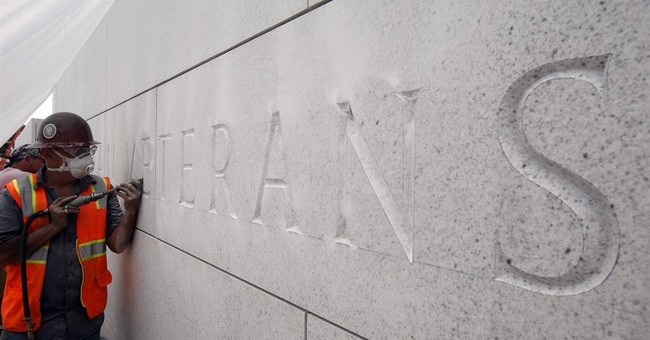 With the 2016 presidential race beginning to take shape, liberals are ratcheting up their attacks on Republicans over labor issues and union benefits. Wisconsin Gov. Scott Walker has been on the receiving end of renewed attacks by the left for his actions that critics say deprived public sector union members of their promised benefits. In New Jersey, there’s been open warfare between the teachers union and Gov. Chris Christie over pensions for retirees.

The complaints have a familiar refrain: Democrats accuse Republicans of reneging on promises made to rank and file union members, eroding the benefits to which they’re entitled, and playing a perverse shell game of promising a defined level of compensation while delivering something less.

Both sides have a point in this debate but unsaid in the discussion is the astonishing hypocrisy of Democrats as it pertains to veterans benefits. Rarely does a week pass without news of yet another instance in which military veterans get the short end of the stick from the Department of Veterans Affairs.

Why are America’s liberal champions not excoriating President Obama for his administration's abysmal record on veterans benefits? After all, these are benefits promised to the men and women who swore an oath to protect and defend the Constitution in exchange for their labor in uniform. What is the difference?

There is no difference. When somebody joins the military, that agreement to serve includes a variety of important clauses and provisos; the term of service, training to receive, trade schools to attend, ranks to be awarded and so forth. Part of this agreement also includes access to VA benefits that may be applicable to service members when they transition back to civilian life. All this and more constitute a labor agreement between the U.S. Government and each person who joins the military.

But the entire scope of VA benefits do not convey to each and every person in the military. Some benefits, like home loan guarantees and access to VA cemeteries for burial, are available to most veterans who receive an other than dishonorable discharge from the military. But of the more than 22 million living veterans in the U.S. today, only a fraction qualify for VA health care and disability benefits. This is because these particular benefits, among others, are not classified as entitlements; they are considered earned benefits, resulting when a service member suffers some sort of wound, injury or other disability while in the military.

A glance at the numbers helps put this into perspective. In 2013, the most recent year for which data are available, fewer than 17 percent of living veterans were receiving disability compensation from VA and just under 40% were enrolled in the VA health care system. But the Obama administration is unable and unwilling to ensure that these much smaller subsets of the veterans universe receive the benefits they earned as part of their employment agreement with the federal government.

Where is the outrage among Democrats over the administration’s refusal to honor this labor agreement? Detractors will note that military personnel are not allowed to be part of a collective bargaining unit like civilian union members but that’s a semantic cop out. When Uncle Sam wants men and women to stand in the line of fire and possibly get killed in the process of fighting our wars, they are promised certain VA benefits. It’s a labor agreement by another name.

The situation is so acute, veterans are dying while VA loses their applications for disability compensation. Health care has gotten so bad, the Government Accountability Office (GAO) has determined that the VA hospital system is a “high risk” program of the federal government. According to the GAO, "These risks to the timeliness, cost-effectiveness, quality, and safety of veterans' health care, along with other persistent weaknesses we have identified in recent years, raise serious concerns about VA's management and oversight of its health care system.”

When Scott Walker suggested reducing benefits to some of Wisconsin’s union members, the state capitol in Madison was forcibly occupied and he was dragged into a recall election. But when the Obama administration breaks its labor agreement with veterans, Democrats harumph long enough to get a headline or two before retreating into silence. The Left becomes unhinged when union members are asked to pay a bit more for their health insurance or contribute more to their retirement but they’re invisible when this administration’s broken labor promises result in dead veterans.