Private Enteprise A Casualty In Ferguson And Beyond 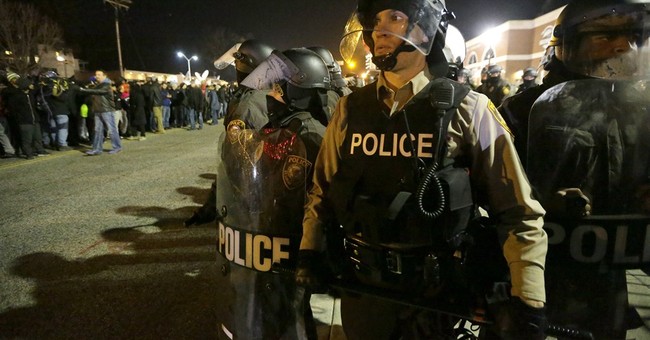 Some believe those words, shouted by Louis Head, stepfather to the late Michael Brown of Ferguson, Missouri, are what touched-off three days of rioting, violence, and untold property damage across the U.S. and elsewhere.

Head was captured on video with Brown's mother Leslie McSpadden, after a grand jury determined that Ferguson Police Officer Darren Wilson did not commit a crime when he shot and killed Brown in a confrontation last summer. The grand jury did determine that contrary to "eye witness accounts" Michael Brown had attempted to enter Wilson's police vehicle and take the officer's weapon, that Wilson believed his life was being threatened, and that firing at Brown was justified.

In response to the news that Officer Wilson would not be indicted, Head encouraged other residents of Ferguson to destroy as much private and public property as possible, and thus "burn down" the city.

The illogic of Head and the other "protesters" is astounding. It seems to assume that destroying other people's property will satiate one's desire for "justice," or what may more accurately be described as a quest for "vengeance." It presumes that the city will be better now that many residents have lost their jobs, investments, labor-hours and other resources.

Long before the Ferguson grand jury was formed - back last summer, shortly after Michael Brown's death - a particular convenience store was burned-down in Ferguson, a store owned and operated by a company called the QuikTrip Corporation.

Not every American knows the name QuikTrip. Yet the privately held, Tulsa, Oklahoma-based QuikTrip Corporation has for years been consistently rated as one of the top 100 employers to work for in the USA, and one of the world’s most socially responsible companies.

QuikTrip stores are usually larger, more fully staffed, and kept cleaner than other covenience stores. QuikTrip guarantees that the gasoline they sell will not damage a car's engine, while General Motors, BMW, Toyota and Honda have all certified QuikTrip as a retailer of "top tier" fuel.

And while the tragic death of Michael Brown shines a painful but necessary spotlight on the plight of inner-city youth, it is important to note that since 1991, QuikTrip has voluntarily designated its stores to be what are known as youth “Safe Place” zones, in partnership with the national non-profit "Safe Place movement". Troubled youths and runaways can enter a QuikTrip store and announce that they are in trouble, and QuickTrip will provide them with food, shelter, and assist them with contacting local rescue authorities, all at no cost to the youths themselves.

Ferguson's QuikTrip store is only one example of the senseless destruction of private enterprise, but it serves as a powerful example. If an entire community - indeed an entire nation - isn't taught to observe and appreciate the contributions of entreprenuers and business owners, their disappearance is inevitable.