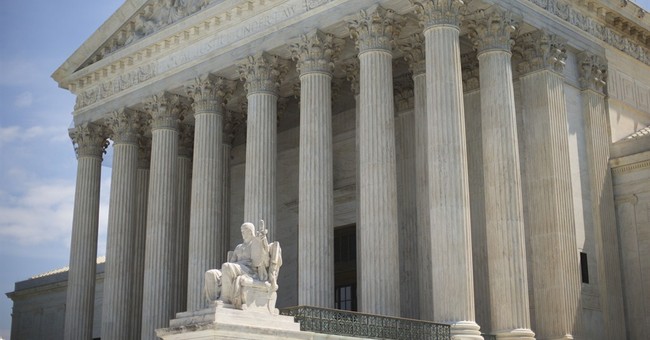 That was, in part, how former First Lady / U.S. Senator / Secretary of State Hillary Clinton described the U.S. Supreme Court's ruling that business owners with religious objections can refuse to pay for health insurance policies that cover contraception.

“I obviously disagree" Mrs. Clinton told the crowd at the "Aspen Ideas Festival" in Colorado on Monday June 30th. "I disagree with the reasoning as well as the conclusion."

Since that time, Democrat Senators Patty Murray (D-Washington) and Mark Udall (D-Colorado) have joined forces with Seante Majority Leader Harry Reid (d-Nevada) in crafting legislation that would - once again - force business owners to pay for coverage of abortions and abortion-inducing medications, even if aborting children violates a business owner-s religious beliefs.

Clinton and her fellow liberals have framed the dialog over the Supreme Court's decision in very predictable ways: the decision was grounded in sexism; women will be left victimized without" healthcare as a result; and the decision makes no sense because "corporations are not people."

Republicans (in the rare moments when they have actually engaged in the discussion) have largely responded by citing Clinton, to Clinton. The Religious Freedom Restoration Act, a law passed almost unanimously by Democrat majorities in the U.S. Senate and House of Representatives and signed by President Bill Clinton in 1993, provided the legal foundation with which the Hobby Lobby corporation successfully argued that their owners shouldn't be forced to pay for things to which they religiously object.

It's certainly worthwhile to remind Mrs. Clinton (and her fellow Democrats) of her husband's work, and the fact that they are now trying to eliminate the religious freedom that was restored 21 years ago should be alarming to all Americans, and to people of all faiths.

But Americans who still love their liberty should also seek to reframe the discussion beyond Mrs. Clinton's allegations of sexism and victimization. It's difficult to imagine Senate Minority Leader Mitch McConnell (R-Kentucky) or Speaker of the House John Boehner (R-Ohio) articulating any salient points on the matter. Yet those of us who reside outside the hallowed halls of Congress can start right now to reject Clinton's logical fallacies and falsehoods on religious freedom, and force the discussion to move in a more truthful direction.

As for Clinton's falsehoods about the Supreme Court decision, consider this statement: "It's the first time our court has said that a closely held corporation has the same rights as a person when it comes to religious freedom..." This was yet another part of the assessment she offered at the gathering in Aspen, and it's not entirely true.

"Corporate personhood," a legal theory stipulating that corporations can be recognized as individual persons in the eyes of the law, is nothing new (surely Mrs. Clinton, a lawyer, knows this). The recent Supreme Court decision over the religious liberty of business owners perhaps affirms corporate personhood in a new and different way, but the legal theory itself was a component of several previous Supreme Court decisions, including the 1886 Santa Clara vs. Southern Pacific ruling pertaining to federal regulations of railroads. In that Supreme Court decision, the court affirmed tha the equal protection clause of th 14th amendment imparts protections to corporations as well as individual persons.

Liberty loving individuals should also begin confronting the mantra repeated by Mrs. Clinton and her liberal cohorts that "corporations are not people." While it is true that a person and a corporation are not precisely the same thing, it is also true that corporations entail people.

To this end, freedom advocates should begin asking Clinton-Udall-Murray et. al. "what is a corporation without people?," and "why won't you stand up for the rights of the people who own and operate businesses?"

This, by the way, points to a huge problem not only among elected officials (in Congress and elsewhere), but also in the media. They incessantly speak about "corporations" as though they are big, impersonal, inhumane entities that serve no good purpose. In reality corporations are operated by real human beings, they employ real human beings, and they provided essential products and services to real human beings while operating with investment money that belongs to other real human beings.

Clinton's suggestion that women will be victimized if business owners are not forced to pay for their employees' abortions is also false. No individual is forced to accept an employment position at the Hobby Lobby corporation, or any other business operated by owners of religious conviction. Thus nobody is forced to rely upon any one individual religious business owner for all their healthcare needs. We are still free to choose to accept or reject employment opportunities, and to choose from among multiple options for health insurance.

Mrs. Clinton is a well-educated and highly intelligent individual, and is no doubt aware of the truths of this matter. It is likely, however, that many in Congress neither think about nor care about the religious liberties of business owners.