Free Speech In The Heartland: ACLU, ADF Call "Foul" Over University's Treatment Of The First Amendment 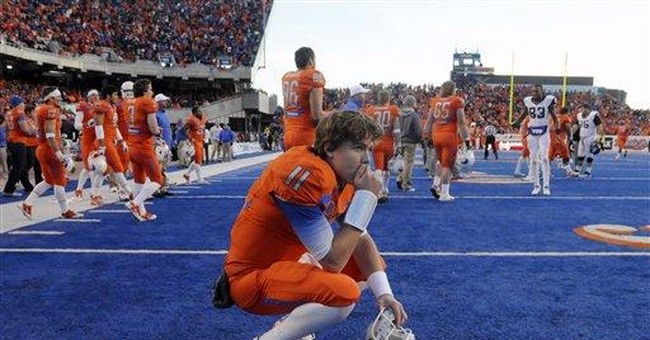 Idaho's Boise State University ("BSU") is world-famous for its telegenic "blue turf" football field and a roster of impressive bowl game appearances. But if current trends continue, the school might be on its way to fame of a different sort: on the same weekend that Americans celebrate their nation's founding and their liberties, BSU is simultaneously under fire from three separate legal defense groups all of which are alleging violations of students' free speech rights.

The concerns have emerged from two nationwide organizations, the American Civil Liberties Union ("ACLU") and the Alliance Defending Freedom ("ADF"), as well as from the Idaho-based Center for Defense of Liberty ("CDL"). They involve the activites of two on-campus clubs.

"We believe that Boise State University violated the First Amendment when it assessed ‘security fees’ against the 'Young Americans for Liberty at Boise State University’ student group” notes Geoffrey Talmon, Attorney with the CDL. Talmon sent a letter ealier this week to BSU President Dr. Bob Kustra, requesting that the university refund money that it charged to the student’s involved with BSU’s chapter of “Young Americans for Liberty” (“YAL”), a club with college campus chapters nationwide. Talmon is also requesting that BSU revise its policies over the assessment of “security fees” at speaking events.

Talmon cites a YAL-sponsored event at BSU on May 16, 2014, which featured Dick Heller as a keynote speaker. Heller was at the epicenter of the US Supreme Court's landmark 2008 “District of Columbia versus Heller” case, wherein a lower court ruling which determined that the Second Amendment to the U.S. Constitution applies to individuals living in a federal enclave was upheld. The high court's ruling resulted in the overturning of a restrictive gun law in Washington, D.C.

“Despite the Heller event having been planned for over six weeks, YAL was not informed until approximately 24 hours before the event that BSU had decided that additional security would be required at the event, and that YAL would have to pay an additional $465.00 for such security” Talmon states in his letter. “This charge increased the facilities cost for the Heller Event by approximately 820% over the previously-quoted total. Furthermore, the webpage containing the details of the Heller Event was removed from the BSU website prior to the event, and the event was also removed from the ‘This Week At Boise State’ section of the BSU website.”

In the letter Talmon references local news reports wherein BSU staffers alleged that the YAL event posed a campus security risk and, thus, required additional security measures to be taken. He also cites what he describes as “BSU’s vocal opposition to the expansion of the 2nd Amendment,” and then states that, even if the university was genuinely concerned about campus safety at the YAL event, “that does not permit the University to put a pricetag on Mr. Heller’s speech, itself.”

Calls to Kustra’s office seeking comment about the incident, and Talmon's requests, were not immediately returned.

In addition to its troubles with YAL, last week BSU and Kustra were both named in a lawsuit filed by the non-profit “Alliance Defending Freedom” organization. ADF alleges that BSU officials required an on-campus pro-life club to post “warning signs” for two pro-life events that campus officials deemed to be “controversial.” The lawsuit also alleges that BSU prohibited the pro-life group from distributing fliers outside one of the school’s eight officially designated “speech zones.”

“University policies that suppress free speech are completely at odds with what a university is: a marketplace of ideas,” ADF Attorney David Hacker said of the lawsuit in a written statement.

Prior to his service as BSU's President, Kustra served as both a legislator, and as Lieutenant Governor in the state of Illinois. According to reports from the Chicago Tribune, in 1996 Kustra sought the Republican nomination for a seat in the U.S. Senate running as a "moderate Republican" in that state who championed both gun control and abortion rights.

Whether by Kustra's influence or not, BSU's stances with the pro-life and pro-liberty organizations on campus bare a striking contrast to the policies of the otherwise "pro-life" and 2nd Amendment-friendly state. Idaho officially requires parental consent for under-age minors seeking abortions, prohibits public funding for abortion services, and as of this month allows students who are licensed to posess concealed firearms to carry those weapons on college campuses.

Spokesperson Greg Hahn said that Kustra's office will likely issue a public response to the YAL conflict next week.