Capitalism Under Fire From Highly Self-Interested Dictators And Diplomats 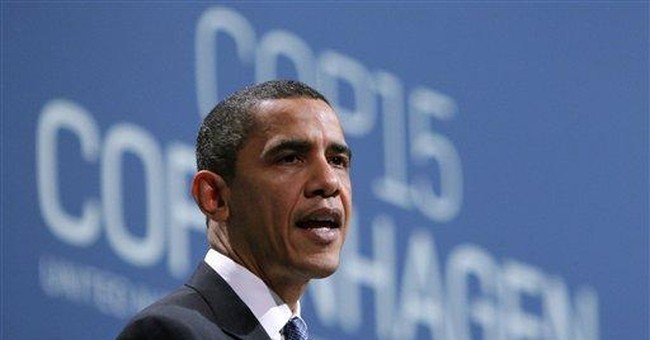 “…our revolution seeks to help all people…socialism, the other ghost that is probably wandering around this room, that’s the way to save the planet, capitalism is the road to hell....let’s fight against capitalism and make it obey us.”

Thus was the conclusion of a roughly half-hour speech – which ran about twenty –five minutes longer than it was scheduled to – from Hugo Chavez, the once freely elected President who is rapidly evolving into the Dictator of Venezuela. The speech was delivered at the United Nation’s Global Warming assembly in Copenhagen last Thursday.

And now, thanks to Comrade Chavez himself, the veil has been completely lifted: the so-called “climate change” agenda has essentially nothing to do with trying to change the climate or “saving the planet,” and everything to do with self-interested politicians trying to control the world’s economic resources.

Last month, this movement was severely discredited by the uncovering of a thousand or so email messages sent or received by global warming authority Phil Jones, of University of East Anglia. Those emails depicted a pattern of ignoring scientific “evidence” that ran contrary to his own global warming theories, as well as a pattern of active “campaigning” for his public policy agenda, rather than a pursuit of “research.”

But as if the global warming movement didn’t already appear sufficiently disingenuous and “hoaxy” before the U.N. gathering, the Dictator of Venezuela showed all the cards in Copenhagen. As blizzard conditions kept people indoors in Denmark Thursday afternoon, Chavez made it very clear that the agenda is not to reverse the “warming” of the planet, but rather, it is to squash the free market economy wherever it exits, and to re-distribute the world’s wealth.

Interestingly, a Chicago Tribune report on Obama’s visit to the U.N. event last Friday was almost as blunt about the economic re-distribution agenda. Noting the lack of agreement among U.N. delegates about a “climate change treaty,” a section of the report notes:

“…Activists and diplomats in Copenhagen say Obama could nevertheless help break the negotiating impasse, particularly if he commits to a set dollar figure on a shared financial aid package from wealthy nations to developing ones, to help the poorer countries adapt to climate change. More than anything, Copenhagen participants say, Obama must tell world leaders that he will push hard for a climate bill in the spring, in time to have a law in place for a potential follow-up summit six months from now…”

So, how much more clear can the agenda be? Here is a major American newspaper acknowledging in its “news” section that so long as the President of the United States agrees to hand-over a certain minimum amount of American money to “poorer nations,” then delegates to the U.N. will be happy once again.

The agenda of alleged “global warming” is in actuality an agenda against free market economics. And the hostility towards the free market is almost universally based on a few specific assumptions: A) In as much as the free market economic system allows for some people to get “rich,” while others remain “poor,” the free market system is itself unjust; B) The wealth accumulation of the rich is necessarily accomplished by unjust means; and C) Economic justice is achieved by re-distributing wealth away from “the wealthy,” and towards those who are poor.

These assumptions are clearly alive and well at the U.N. Yet, despite however passionately people around the world may believe these assumptions to be true, the assumptions themselves lead to a slew of other questions – questions that economic re-distribution enthusiasts generally don’t ask.

If the free market economy has produced “unjust” economic outcomes, what economic system can produce better, more “just” outcomes? If re-distributing money out of the United States and other “wealthy” nations, and in to “poorer” nations is the “right thing” to do, how much money should be taken? To which nations shall it be given? What is the definition of a “wealthy” nation? How does one define a “poor” nation?

Who shall make these important determinations? Should it be the U.N? Can the world trust a “body of dilopmats” from around the world who, while in the process of gathering to set policies that restrain others’ freedom and that re-distribute others’ wealth, nonetheless themselves demand a life of luxury, flying-in to Copenhagen in private jets, utilizing limousines imported from other countries to shuffle them about the city, and so forth?

Or should one individual person be selected to establish “economic justice” throughout the world? And who is so just, so “moral,” so “fair” and so wise that they can know what is “just” for every nation of the world? Is it Hugo Chavez? Barack Obama perhaps?

The loudest opponents of capitalism are quick to decry the self-interests of others. But they are conveniently ignoring their own.