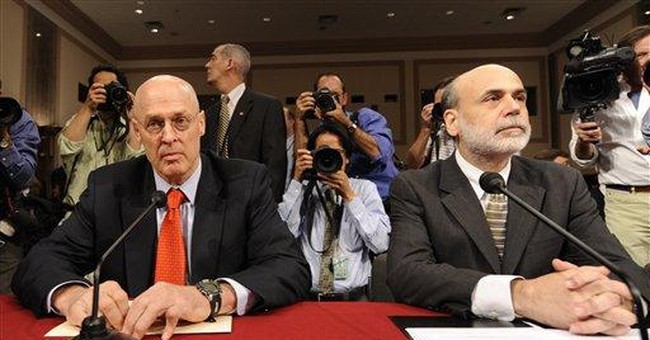 Someone in the world of editorial columns recently predicted that a “bailout backlash” would begin in the year 2010.

Could we arrange for that backlash to get started a little sooner - - like, now?

It’s understandable if Americans aren’t paying attention to the machinations of government at the moment. Most of us just wrapped-up a somewhat anxious holiday season, and gladly said goodbye to a difficult 2008.

But the new Congress launches this week, and the new President takes office in less than three weeks. And if you’ve been angered by the ways the current President and Congress have tossed around your tax dollars, consider what might be ahead.

First, here’s a quick review. The so-called “bailouts” of banking and financial institutions last fall are old news now, and whether or not Treasury Secretary Paulson and Federal Reserve Chairman Bernanke “saved the world” from a far worse economic collapse is debatable. But to the extent that one can actually follow how Paulson has disbursed our $700 billion, one thing is clear: he has not allocated the revenues in the ways he stated that he needed to - - by buying up “troubled assets” (bad loans) from lenders - - when he was pressuring Congress to pass the bailout legislation.

Then came the Automotive industry’s turn to beg for financial aid, and they almost got it from the Congress. But the Republican minority in the Senate held-out for some modest measures of accountability, in exchange for the cash, demanding that the United Autoworkers Union adjust assembly line wages so as to make them more compatible with those of the successful foreign car companies with manufacturing operations here in the U.S.

Of course, the United Autoworkers Union refused to agree to accountability, and the legislation failed. But President Bush quickly stepped-in to bankroll the auto industry’s dysfunction for a few more months, dipping-in to the Treasury Department’s “bank bailout” fund and dolling-out a few billion to General Motors and Chrysler. This was a flagrant violation by Bush of the intended purposes of the bank bailout fund. Worse yet, the President then attempted to explain his maneuver in an interview with CNN, stating, in a moment of frightening irrationality, that “I abandoned free market principles to save the free market system."

The car companies will be back in Washington this year, begging President Obama and the new Congress for more money, and declaring that without a “bailout” the world will end. Hopefully by then, more Americans will be familiar with the investigative work emerging from the Detroit Free Press, the news department of WDIV-TV 4 in Detroit, and syndicated columnist Michelle Malkin.

Collectively, these media professionals have asked questions, and have investigated, and have uncovered information that nobody on Capitol Hill thought to consider. They have discovered examples of the UAW losing millions of dollars of union members’ dues in failed business investments - - ranging from a startup airline that never “got off the ground,” to a left-leaning talk radio network that operated at a loss of $75,000 a month, to the acquisition of golf resorts to facilitate the UAW’’s “golf summer school” program. Detroit’s channel 4 tv has also recently produced a series of “under cover investigative reports” exposing both assembly line workers and union bosses at a Ford manufacturing plant, as they “punch the clock” and begin a work shift, and then leave the facility to go shopping, buy beer, get haircuts, and spend hours at local bars, all on Ford company time. With this kind of corruption and reckless mismanagement, it’s no mystery why the American car business can produce decent enough vehicles, and still remain unprofitable. Yet, this is the kind of failure that American’s are being forced to sustain, with the allocation of their tax dollars.

And how about a “bailout” for America’s dying newspaper industry? Democrats in the Connecticut state legislature have already begun a movement to “bailout” two small town newspapers in the town of Bristol, arguing that a “free press” is essential to democracy. With this mindset, and given the legitimately vast historical resource that the “New York Times Historical Archives” provides online to libraries and schools across the country (other newspapers provide such resources as well), one could imagine Congress approving the expenditure of our tax dollars to keep this industry afloat for a while longer.

And don’t forget pro sports. For well over a decade, municipal and county governments have been laying-out public funds to build ever-bigger and better sporting arenas, calling such expenditures “investments,” and banking on the “if we build it they will come” guarantee. Today, ticket sales are declining (especially in the NFL), yet public properties, privately owned teams, and multi-millionaire athletes remain economically intertwined with one another. Should a team or two from the NFL - - or from the NHL or MLB - - hint at bankruptcy this year, how difficult will it be to convince Congress that such teams are “too big to fail?”

The new President and Congress must act quickly to help the economy. Funding mismanagement and failure will not accomplish this objective.