Obama, Biden, And The Economics Of "Getting Even" 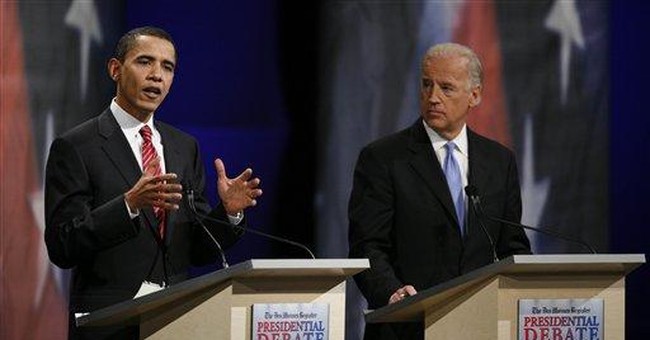 Is it time for America to “get even” with “rich people?”

It may have been yet another one of a long line of his famous political gaffes, but Vice Presidential candidate Joe Biden spelled-out the Obama-Biden economic plan with shameless clarity and candor.

In a recent interview on ABC-TV’s “Good Morning America,” Senator Biden said, “We want to take money and put it in the pockets of the middle class peop...” Do we need any further explanation?

For the entire nineteen months of his presidential campaign, Barack Obama has been crossing the country, fanning the flames of resentment towards people who are perceived to be financially successful. He has continuously criticized what he call’s the “Bush tax cuts for the rich,” implying that the Bush administration cut taxes for wealthier Americans, while leaving tax rates the same, or even raising them, for less wealthy income earners (this, of course, is not true, but Obama has made it clear that “the rich” don’t ever “deserve” to have their tax rates cut).

Obama has also proposed a “federal crack down” on what he deems “excessive pay” for corporate executives - - a great way to garner the support of blue collar and mid-level workers, who believe it is unfair that the President of the company earns “so much more” than the mail room clerk who “works so hard.” He has pledged to tax the “excessive profits” of American oil companies, and return that money to “hard working Americans” in the form of some sort of rebate check. And he has repeatedly lectured about his plan to bring America to “economic justice,” never actually defining what that means, yet clearly implying that the current state of things is inherently unjust, and in need of his repair work.

Much of Obama’s economic rhetoric has been delivered in front of friendly audiences. Yet, in a recent one-on-one interview at the Fox Newschannel, Bill O’Reilly pointed out that the Senator’s proposals amounted to “income redistribution - - a basic tenant of socialism.” In response, Obama offered a “gosh Bill, I don’t like paying higher taxes either but you and I can afford it” kind of response, and then sought to change the subject.

But after nineteen months of economic anecdotes wrapped-up in eloquent speeches and passionate oratory, combined with constant reminders from the candidate’s surrogates that Barack is just as American as all the rest of us, Obama’s running mate has now spelled out the real essence of the Democrats’ economic plan in simplistic terms that anybody can understand: “We want to take money and put it in the pockets of the middle class people…”

No reference to whose money it is in the first place, or how wealth is created, or the human toil and sacrifice and anxiety and risk entailed in the creation of the wealth. Obama and Biden simply intend to “take money,” and “put it in the pockets” of people they believe are deserving of it. It IS income redistribution - - end of story.

Much has been said about how Obama’s economic policies are based on false assumptions. Most notably, Senator Obama seems to assume that economics is a “zero sum” enterprise - - if any one individual financially prospers, other individuals necessarily have fewer resources available to them. This was the view held by Senator Obama’s father, Barack Hussein Obama Sr., a bureaucrat in the communist government of Kenya back in the 1960’s, and it is a view that ignores the reality that Western capitalism actually allows the economic “pie” to expand.

But the Obama economic plan is also de-humanizing on multiple levels. It ignores the human drama, and the development of human character, that is required for one to become a productive or more productive member of society. To “take” from those who have - - simply because they do “have” - - and to “give” to those who don’t have, simply because they don’t, makes a mockery of human merit, and is destructive to human beings on both sides of the equation.

Democrats are fond of noting that American history is replete with examples of government “lending a helping hand” to its citizens. This is true. The G.I. Bill Of Rights, and the Department of Veterans Affairs home mortgage guarantees, are two examples of government helping citizens obtain a college education, and homeownership, when they might not have otherwise been able to contemplate either one.

Yet to qualify for either of these programs, Americans had to achieve something first. And both of the programs encouraged more wealth producing behavior after the fact.

Now, Obama and Biden have constructed a campaign that promises to simply take things away from people who have achieved them, and give things to people who have not achieved them. This is “change” that America cannot afford - - neither in terms of monetary, or human capital.