Austin Bay
|
Posted: Nov 06, 2019 12:01 AM
Share   Tweet
The opinions expressed by columnists are their own and do not necessarily represent the views of Townhall.com. 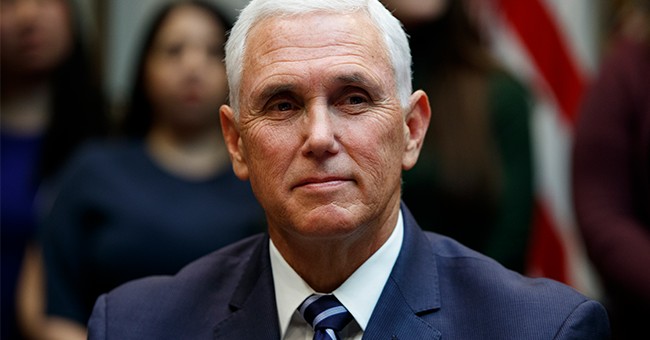 Vice President Mike Pence deserves praise for not only remembering the national horror but also personally showing up and speaking out at Fort Hood, Texas, the scene of the Nov. 5, 2009, terrorist massacre that killed 13 American soldiers and citizens.

It has been a decade since that terrorist attack on U.S. soil by a self-identified Islamic terrorist and American traitor. Ten years on and only a damnable trickle of mainstream media bother to reflect on this horror. In terms of mainstream printers, TV images and internet pixels, this savage outrage has been ... briefly mentioned, barely touched.

For the record, the terrorist who perpetrated the massacre is still alive, on death row in the Fort Leavenworth, Kansas, military prison.

We return to the VP's remarks. Pence began his Oct. 29 speech by thanking the military crowd, overwhelmingly composed of active duty personnel, for its service and applauding the Fort Hood-headquartered U.S. Army III Corps for its "critical role in the global war on terror." He commended the recent elimination of Islamic State group terrorist commander Abu Bakr al-Baghdadi and stated what is obvious to all but the most politically, morally and propaganda-benighted humans on our planet: The fight against terrorism continues.

Honest souls will acknowledge Pence's intro remarks were apt given the moment, the venue and the young Americans in uniform who put their life at risk on behalf of other Americans.

Pence then confronted the horror: "(T)he heroes of Fort Hood have ... paid the last full measure of devotion on foreign fields of battle. And as the nation will pause to remember next week, 10 years ago, on November 5, terror struck at the heart of this base when a former Army psychiatrist opened fire inside the Soldier Readiness Center, claiming the lives of 13 extraordinary Americans. When I arrived last night, I ... paid my respects at the Fort Hood November 5 Memorial. I walked by the columns dedicated ... to the 13 men and women who fell that day. And I was deeply moved -- moved by the tributes to all of those that were lost."

Former Army major and psychiatrist Nidal Malik Hasan made Fort Hood a domestic battlefield. He killed 13 people and wounded over 30 more before a policeman wounded him. Fourteen dead is arguably a more accurate toll, since the unborn child of a pregnant victim died when she died. This is a forensic fact.

What spurred Hasan's treason? From the get-go, non-benighted humans identified Islamic jihadi ideology as the psycho-political insanity guiding his crime. Hasan had known contact with terrorist recruiter Anwar al-Awlaki. But the FBI did not investigate the warnings signaling Hasan's Islamic conversion. An official who recommended the FBI investigate was told an interview was "politically sensitive."

Really? Sensitive to whom?

Obama decided his political survival trumped the welfare of the soldiers he commanded.

In 2017, Hasan wrote that everyone opposing the Afghan Taliban's establishment of "Sharia (God's) Law" as supreme law and seeking to replace it with something "like a democracy that doesn't rule by God's law" were "the enemies of God" and worth killing.

The global war on terror isn't over. Obama declared in 2009 that the war on terror had become a "contingency operation." What a fraud. President Trump despises endless wars, but wars aren't over until the enemy is defeated.

Pence's praise for American military members is so pertinent. "(T)he truth is," he told Fort Hood's soldiers, "you've stepped forward in a calling where you've decided to count our lives as more important than your own."

That's guidance for a thankful prayer on Veterans Day, Nov. 11.