Austin Bay
|
Posted: May 01, 2019 10:01 AM
Share   Tweet
The opinions expressed by columnists are their own and do not necessarily represent the views of Townhall.com. 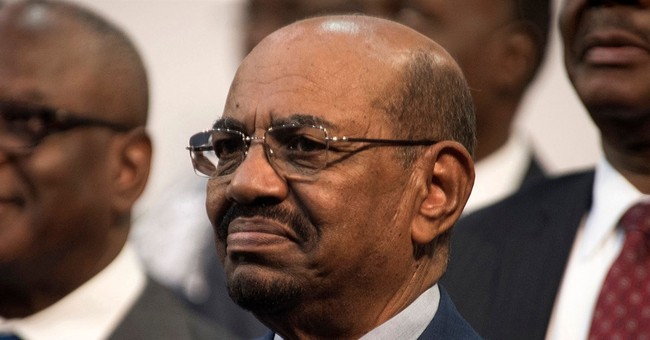 Rise by the sword; fall by the sword. In 1989, Bashir led a military coup that toppled the government in Khartoum. For the next three decades, he relied on the military to maintain his personal power. Force of arms intimidated his political opponents while graft rewarded his political cronies.

Sudan's oil revenues permitted food and fuel subsidies that bought fake domestic peace in the cities. Oil also funded Bashir's war in Darfur and his war on Christian and animist tribespeople in what is now South Sudan. In 2009, the International Criminal Court (ICC) indicted Bashir for war crimes and genocide committed in Darfur.

Bashir never really prepared to cede power because he never thought that day would come. In early January, he indicated he would seek reelection in the 2020 presidential campaign. President? Under Bashir, Sudan's elections were shams.

Yet Bashir today resides in a prison cell, not the president's palace.

Now political uncertainty reigns in Sudan. Sudan has entered a "revolutionary moment" with hopeful and dreadful echoes of the 2011 Arab Spring. So far, Sudan's body count is small -- fewer than a hundred dead, if reports are accurate. That recalls Tunisia (Arab Spring's minor success) and Egypt. Brutal wars spawned in 2011 still savage Libya and Syria. Egypt's revolt led to a Muslim Brotherhood dictatorship. Now the Egyptian general who toppled the Islamist regime is president in Cairo. Sudanese fear another general will eventually replace Bashir.

Sudanese demonstrators appear to have avoided the violent excesses of the Arab Spring's chaotic protests and brawls. Over time, Sudan's anti-regime demonstrations became more organized. The coalition group that emerged articulated a vision that had broad societal support. Only hardcore political Islamists objected to it.

The protests began Dec. 19, 2018, and were sparked by reductions in food and fuel subsidies, and anger at the general decline of Sudan's economy. The loss of revenue from South Sudan's oil fields (South Sudan became independent in 2011) crimped Khartoum's finances. U.S. counterterror sanctions imposed on Bashir's regime hurt. In late December, demonstrators began to express disgust with Bashir and his corrupt government. Removing him became the core demand. On Jan. 1, an opposition coalition issued a Declaration of Freedom and Change that outlined a transition period where Bashir's government would cede power.

Demonstrators showed tactical savvy. If police dispersed a protest in a particular town, the next day, another would begin. Bashir restricted internet access in an effort to block social media posts protesters used to organize demonstrations. That gambit failed.

The demonstrations increased in frequency and intensity. They expanded in size and erupted in towns throughout the country. Sometime in early February, Bashir realized Sudan's people wanted him to go. On Feb. 22, he unleashed the National Intelligence and Security Service (NISS). He proclaimed a state of national emergency that banned public demonstrations and gave the police unfettered power to arrest.

The MTC has entered discussions with activist coalition now guiding the protests, the Alliance for Freedom and Change. The MTC says military rule will last two years. The elated AFC demands the army immediately step aside in favor of a civilian government.

With Bashir gone as a unifying villain, political fracturing within the opposition remains a possibility. Sudan's regular military forces are suspicious of the NISS and other security organizations personally loyal to Bashir.