Austin Bay
|
Posted: Jan 30, 2019 12:01 AM
Share   Tweet
The opinions expressed by columnists are their own and do not necessarily represent the views of Townhall.com. 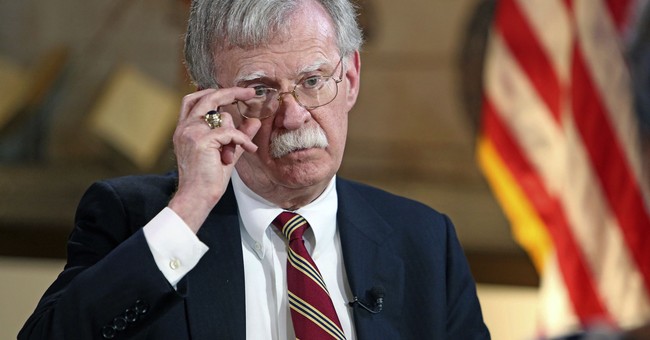 Reuters reported it was "not clear if disclosure of the notes was intentional, and there was no indication that such a military option would be used any time soon."

In fact, the briefing's central subject was the application of what many commentators would call "soft power" options for dealing with Venezuela's mess.

The options included economic sanctions to penalize and pressure Maduro and his thugs and coordinated diplomatic action by the U.S., its allies and other nations who support Venezuelan freedom. One of the coordinated actions is stripping Maduro of personal political legitimacy. With every passing day, more nations express their support for freedom by declaring Maduro's regime illegitimate and formally recognizing opposition leader Juan Guaido as Venezuela's interim president and legitimate head of state.

Which is precisely what it was supposed to do. Perhaps a picture is worth a thousand words. In this case eyewitness press accounts and camera video of paper shuffling, nonchalant paper clutching and four words on a tablet were a quiet, succinct and plausibly deniable form of saber-rattling.

The White House intentionally avoided bombastic war rhetoric. However, later on Jan. 27, another White House spokesman did remind reporters, "As the president has said, all options are on the table."

Yet the soft shoe military subtlety has a role in this coordinated foreign policy operation that is on-going and is far from resolved.

Military action anywhere is a last resort; however, as part of a power cocktail of diplomacy, information and economic operations, it as an absolutely important element and Maduro's case a necessary reminder.

Maduro, his henchmen and his international supporters need to know the military element of American and allied national power exists, is potent and could be brought to bear.

The Pentagon (and other U.S. agencies) use the acronym DIME as verbal coin for the four basic elements of national power: diplomatic, information, military and economic.

An example of humanitarian power was the fall 2018 deployment of a U.S. Navy hospital ship USNS Comfort to a Colombian port near a refugee camp housing several thousand Venezuelans. President Donald Trump personally mentioned the ship's mission and said, "We're going to take care of Venezuela." Yes, it's a military vessel, but a hospital ship, not a warship.

No hospital can cure Venezuela's critical illnesses: criminal governance, corruption, regime violence and socialist economics. Instead, diplomacy and economics should take precedence: the diplomatic battle for government legitimacy -- Guiado or Maduro? -- and the economic battle for control of Venezuelan oil revenues and financial resources.