The North Korean Dictatorship's Tart of the Deal

Austin Bay
|
Posted: May 17, 2018 12:33 AM
Share   Tweet
The opinions expressed by columnists are their own and do not necessarily represent the views of Townhall.com. 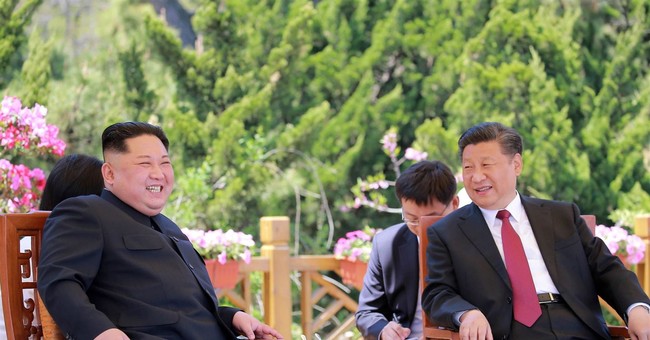 Since early March of this year, when North Korean dictator Kim Jong Un told South Korea he would discuss denuclearizing his regime without pre-conditions, everyone familiar with Kim regime behavior has predicted Little Rocket Man and his Pyongyang gang would eventually wiggle, yelp and try to snarl any truly disarming deal.

Here is a sketch of the basic scenario: With the goal of dividing Seoul and Washington, at some point Kim and his minions would raise to the fuzzy level of goose bumps South Korean hopes of a permanent peace settlement. Then -- after exchanging hugs and bouquets -- one of Pyongyang's leather-faced apparatchiks would threaten to terminate any diplomatic talks.

In some shapeshifting fashion, the North would test Trump's threat to walk away from the negotiating table.

Here's a variant scenario with this goal in mind: A Pyongyang stalwart suddenly throws a fit of totalitarian pique as North Korean troops place an ICBM on a launch pad. Then Little Rocket Man himself says, hey, you New York Art of the Deal dotard, if you're so serious about denuclearizing poor little North Korea, why not slip us say, five or seven hundred million bucks to cover negotiating expenses? It's cheaper than war. Isn't that how you Queens real estate tycoons handle labor union leaders?

Well, that's true. However, his complaint ignored several facts, which is a good indication it was an agitation-propaganda ploy to try to get the Trump Administration to accept something less than complete denuclearization.

Kim chastised Bolton for telling the press that the technical process for denuclearizing North Korea would have requirements similar to those used in Libya -- unrestricted access to sites, verification, removal and disposal of nuclear weapons material and manufacturing capabilities.

Bolton expressed an informed opinion, and North Korea went ballistic, so to speak. Pyongyang cancelled planned meetings with Seoul and threatened to cancel the June summit with Trump in Singapore.

South Korean officials reacted coolly, calling the North Korean cancellation "unfortunate." Trump shrugged and told the press he hadn't heard anything official. When asked if his demand that North Korea denuclearize was firm, he nodded and said yes.

The Vice Minister's Complaint could be read as a Freudian slip revealing paranoid Pyongyang's deepest fear: an internal North Korean rebellion. We know Kim Jong Un fears rebellion and coup. He had his half-brother murdered after hearing rumors North Korean expats had asked his brother to help reform the Kim regime. Rebellion connects to Libya. Libyan rebels killed Libya's denuclearized dictator Muammar Gaddafi. If Gaddafi had possessed deliverable nukes he might have stopped foreign states from aiding the rebels, but perhaps not. A dictator fighting an internal rebellion is a distracted man. Threatening to nuke foreign states while battling a domestic coup gives those foreign states a great reason to launch an all-out attack to eliminate the dictator's nuclear weapons. That's all alternative history.

As for current history, North Korea is guilty of poor theatrical timing. Smart negotiators threaten to walk 48 hours (or less) before the talks begin. That gives the deal breaker two news cycles of doom-filled drama.