Austin Bay
|
Posted: Feb 22, 2017 12:01 AM
Share   Tweet
The opinions expressed by columnists are their own and do not necessarily represent the views of Townhall.com. 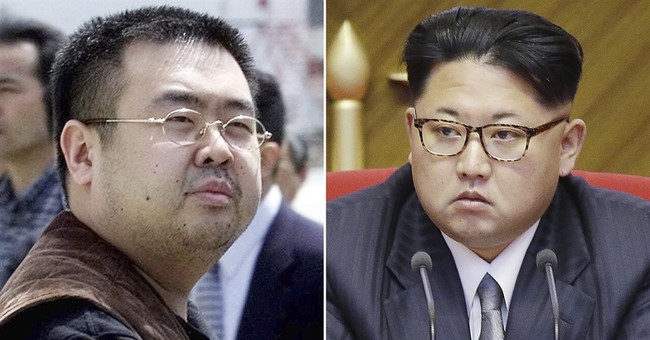 On February 13, assassins murdered the dictator's half-brother, Kim Jong Nam. The hit team found their quarry in Malaysia, at the Kuala Lumpur airport.

Brother Nam is Dictator Un's older half-brother. For some 15 years he has lived outside of North Korea. However, before traveling to Malaysia he had attended a memorial service in Pyongyang for his and Jong Un's deceased father, Kim Jong Il. You may remember him, the pudgy and violent paranoid who liked to watch movies and kidnap actresses?

Why murder Brother Nam and in an international airport?

The Korean Times is claiming that North Korean defectors have repeatedly asked Jong Nam to politically challenge Jong Un. One defector group in Europe asked him to lead a government in exile. Jong Nam rejected the proposal. Though he said he supported reform in North Korea, he also said he supported his younger brother.

One currently favored theory of the assassination is that is that exile opposition genuinely worries Kim Jong Un. Assassinating his brother in public is a direct threat to exiles. The video segment, now on the internet, gives the threat a form of digital perpetuity. Intelligence agencies know the locations of closed circuit cameras at airports.

Now for nukes and missiles. On February 12, the day before Brother Nam's demise, Dictator Un put on another display. His regime launched a new missile, the Pukgukson-2 (Polaris-2). The technical specifics make this very bad news. Solid fuel propels the missile, which means it can be launched on short notice. A tracked transporter erector-launcher (TEL) fired the missile. This means the new missile is mobile. North Korea has few paved roads; a tracked TEL isn't road bound.

Moreover, it was cold-launched -- expelled from the TEL before main booster ignition. That indicates a submarine can fire the Polaris-2.

"...North Korea is simply not capable of developing a completely organic, sophisticated, and complex sea- and land-mobile solid fuel missile [like the Polaris-2]...North Korea doesn't have the industry base, the massive foundational engineering and technology research infrastructure for production, assembly and quality control to independently build the ballistic missile that was demonstrated..."

So who helped Kim Jong Un? No, his North Korean regime isn't a spy novel, or whodunnit or reality show. It is a genuine threat, and an intolerable criminal reality.