Austin Bay
|
Posted: Apr 27, 2016 12:01 AM
Share   Tweet
The opinions expressed by columnists are their own and do not necessarily represent the views of Townhall.com. 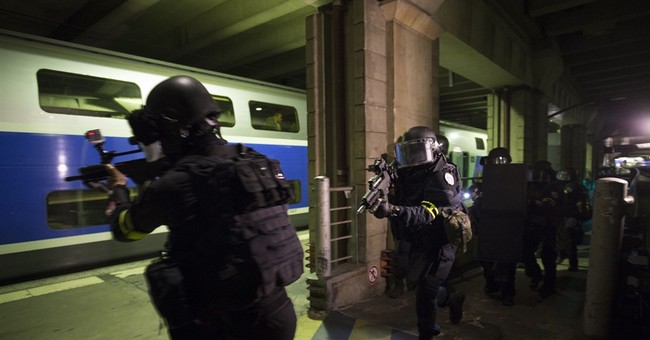 Trending
On April 25, Abu Sayyaf Group Islamist terrorists tossed a Canadian tourist's severed head onto the steps of building on the southern Filipino island of Jolo. Last September, ASG seized the man, John Ridsdel, while he vacationed in the Philippines. ASG demanded a large ransom for his life. Canada refused to pay it. So the terrorists slaughtered him.

An act of terror, crime or both?

I call ASG a violent Islamist terror group for several reasons. ASG self-identifies as one. It has cooperated with Jemaah Islamiyah, the al-Qaida affiliate that conducted the October 2002 attacks on the Indonesian island of Bali. In 2015, ASG's senior commander, Isnilon Hapilon, pledged loyalty to ISIS caliph Abu Bakr al-Baghdadi. Abu Sayyaf translates as "bearer of the sword." For jihadis, the name is Islamic propaganda whose violent poetry erases political borders. ISIS' now-deceased "minister of oil" used it as a nom de guerre.

ASG also conducts combat operations, so it takes combat forces to defeat it. Cops alone can't handle it. In early April, ASG terrorists killed 18 Filipino soldiers in a jungle firefight on Basilan Island. The soldiers were threatening a camp thought to be Hapilon's headquarters.

ASG's biggest terror attack, the February 2004 bombing of a ferry in Manila Bay, had the iconic resonance terrorists' prize. 116 of the 900 passengers died when the bomb exploded as the ship passed Corregidor Island. In May 1942, Corregidor was the last U.S. garrison in the northern Philippines to surrender to the Japanese.

ASG originated as a religious terror group that left a nationalist insurgency. In 1991 money provided by al-Qaida helped fund ASG's split from the autonomy-seeking Moro National Liberation Front. Filipino Muslims are Moros (from the Spanish association of Muslims with Moors). Ninety percent of Filipinos profess Christianity. Six percent are Muslim. Most Moros live in the south (Mindanao and Sulu archipelago) or on the island of Palawan. For five decades, in various guises, the MNLF and the Moro Islamic Liberation Front have fought a low-level war with Manila that has cost an estimated 120,000 lives.

ASG has three goals, each one forwarding violent Islamist aims: sow chaos and fear that frustrates attempts to end the Moro War; establish a Moro Muslim ISIS province in the southern Philippines; with other violent Islamists conquer the planet and establish a global caliphate.

However, the Filipino government and the U.S. Department of Defense emphatically classify ASG as a criminal organization.

The Filipino government routinely calls ASG a vicious gang, even as its forces conduct counter-terror operations. A Pentagon spokesman recently condemned it a "barbaric extortionist group."

Pulled punches? Yes, but also political warfare. Manila wants to encourage other Moros to oppose ASG and deny it any legitimacy as a Filipino political force.

ASG scorns both and portrays the "old line" Moro fronts as sell-outs.

Muslims and Christians on several islands, particularly Mindanao, are tired of bloodshed. They see tourism as a major economic contributor.

ASG terrorists, however, kill tourists. Hence Manila's conclusion that verbally criminalizing Abu Sayyaf terrorists is a tool for defeating them.