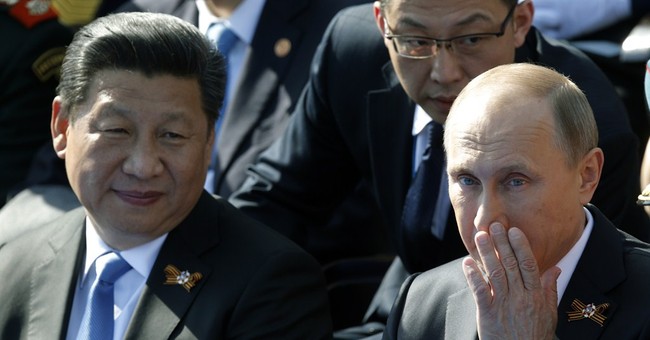 Foreign foes see U.S. presidential election years as opportunities to test and bedevil -- which is a good reason to suspect 2016 will present the American electorate with a violent international challenge.

Though this column sketches two representative scenarios, they are not predictions. No one can predict a specific crisis will occur at a specific time. However, climbing a ladder usually entertains more risk than sitting in a chair; a rickety altitude adds gravitational uncertainty. A presidential election year is a moment of extended political uncertainty. Uncertainty, if exploited, may become a psychological vulnerability.

Civil War historians may argue the Vietnamese emulated the Confederate's 1864 gamble. In that election year, rebel troops threatened Washington. The threat drew Union troops from Richmond, but it also had a political aim: damage Abe Lincoln's credibility and help elect a "peace" Democrat willing to negotiate with the South. Unlike Tet 1968, the Confederate foray failed. Union military successes, such as William Sherman's Atlanta campaign, buoyed Lincoln politically and aided his re-election.

In 2004, U.S. forces watched for terrorist "surge operations" in Iraq and Afghanistan. No surge occurred. I suspect al-Qaida's Abu Musab al-Zarqawi wanted to launch spectacular attacks but lacked the strength.

Is Russian President Vladimir Putin an opportunist or a chess master? He's both. Putin fought the 2008 Russo-Georgia War for many reasons; opportunity is one. In retrospect, he leveraged the U.S. election cycle and specific 2008 U.S. election tropes; he was looking 20 moves ahead.

In September 2009, Obama claimed the reset mission was accomplished when he gave in to Putin's demand that the U.S. stop the deployment of anti-ballistic missiles to Poland. In doing so, Obama double-crossed two NATO allies (Poland and the Czech Republic).

On Sept. 11, 2012, the election year and 9/11 intersected in Benghazi. The Obama administration blamed a crank YouTube video for the assault on the U.S. consulate and murder of our Libyan ambassador. How wretchedly false. The attack was well-planned. It told the world that Osama Bin Laden's death had not defeated Islamic terrorism.

So next year, the American electorate will climb a ladder. Here are two scenarios; neither are far-fetched, and they aren't intended to be. Trust that on Sept. 11, 2016, all U.S. facilities, foreign and domestic, will be on high alert. U.S. security forces will be postured to respond quickly and ferociously to a Benghazi-style assault. But that will not deter Islamic State-type terrorists. Alerts don't last forever. U.S. facilities in several sub-Saharan African and Latin American nations remain vulnerable to attack. A Nairobi 1998 massacre would meet the terrorists' election year media objective. We're here, and we're killing you.

The second scenario builds on Putin's 2008 gambit, via reset 2009, via the Syrian red line 2013, via the Crimea invasion 2014. Putin used Ukraine's February 2014 turmoil to shred the 1994 Budapest Accord, which exchanged Ukrainian nukes for Kremlin guarantees to respect Kiev's territorial integrity. In doing so, he told Eastern Europe that, NATO or not, he will re-draw Russian borders. A creeping war of aggression in Eastern Ukraine followed. Russian military probes of neighboring nations increased in number and bravado.

Yet a year later, Ukraine continues to resist. Oil prices have dropped, sapping Kremlin economic strength. A Republican administration with a Reaganite bent will oppose Putin's Cold War recidivism. He has a window to escalate and win the war in Ukraine. That window begins now and extends through November 2016.