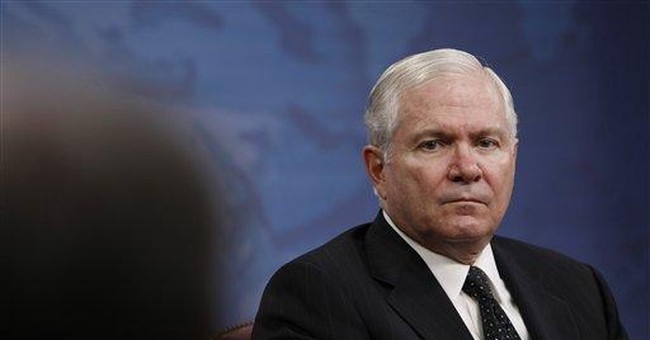 Victory in Iraq and Afghanistan is the driving force behind Secretary of Defense Robert Gates' new long-range defense plan. Gates made that clear in an article he wrote for the January issue of Foreign Affairs Magazine: "The United States' ability to deal with future threats will depend on its performance in current conflicts. To be blunt, to fail -- or to be seen to fail -- in either Iraq or Afghanistan would be a disastrous blow to U.S. credibility, both among friends and allies and among potential adversaries."

Given the long lead time in high-tech weapons procurement programs, is this a contradiction, apparently putting short-term considerations over longer-term, over-the-horizon risks that could threaten national survival?

The answer is no.

Gates understands the importance of perseverance in war -- the weapon of spine, determination, will.

Osama bin Laden committed many strategic blunders, but one of his greatest was underestimating American will. References to America "fleeing" from Somalia litter captured al-Qaida documents.

Credibility of commitment -- the will to win -- is the psychological backbone of deterrence. A determined foe will scorn advanced weapons with near-magic capabilities if he believes you won't use them or that he can force you to fight on a battlefield where the weapons are not decisive. He wagers his will to win far exceeds your comfy, bourgeois fecklessness.

Credible commitment, Gates wrote, extends beyond winning the war of bullets to winning the war for long-term security, which requires maintaining "small war" capabilities, including counter-insurgency skills, local security training programs, rule of law projects, and economic and political stabilization capacities. In the strategic context of the 21st century, these are "systematic weapons" (strategic approaches and tactics not dependent on specific weapons systems, but rather people skills). They are potentially more decisive than the deadliest high-tech weapons system, for they are the means of restoring or promoting productive, just societies and thus creating future allies.

The continuing tragedy is that the United States has yet to comprehensively integrate civilian entities and non-military governmental agencies into this process and thus never achieves "Unified Action" (Pentagonese for the synchronized use of diplomatic, military, information and economic power).

The U.S. military is often the only agency on the ground. Infantrymen must act as diplomats in the morning, agricultural experts in the afternoon and cops after dark. Gates' article noted improvements in inter-agency cooperation, but -- with succinct resignation -- concluded that "military commanders will not be able to rid themselves of the tasks ... ."

Gates' defense plan, presented this week, seeks to embed these capabilities but also thwart the most likely current and emerging conventional threats, what he called "the security challenges posed by the military forces of other countries -- from those actively hostile to those at strategic crossroads."

"Most likely" sounds bland, but for Congress, defense industries and many military leaders, they are fighting words. Money isn't the only reason -- legitimate debate over what constitutes adequate preparation for a "war of national survival" is not only justifiable, but a duty. The reason the United States confronts terrorist threats is that America has the combat power to win conventional force-on-force fights, and that must be retained.

Gates doesn't dispute that -- he argues for balance. Budgets are limited. Procuring the expensive "perfect" may be ideal, but acquiring sufficient numbers of "the better than good enough" is more rational.

As a specific example, Gates bets that a sufficient number of F-35s assures U.S. air dominance in the coming decades, so the Pentagon can buy fewer F-22s. Now a battle over numbers flares. Gates says 187 F-22s. I estimate the right number is around 250. Hey, it's not quite thin air. It's based on attrition and operational estimates, and posits a U.S.-China clash over Taiwan.

No one wants that conflict, but if it occurs sometime in the next 20 years we'll rue the day we didn't buy more F-22s. Gates, however, wins the bigger point -- America has less expensive systems that more than overmatch potential adversaries.

Choices must be made, and Secretary of Defense Gates has made his. He has done so with an acute assessment of the long-term strategic benefits of assuring success in Iraq and Afghanistan complemented by a cool, intellectually defensible estimate of future requirements. His proposals now become a Washington budget warfighting document.