Hollywood Elitists and Their Unscripted Support for the Left 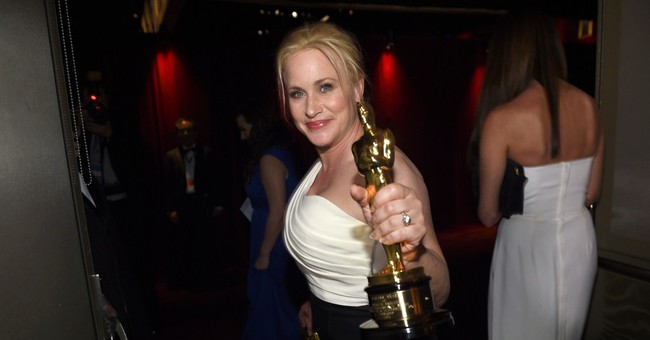 The War on Women rhetoric has become a well-known political staple of the liberal left—but it has also seeped into Hollywood.

On Sunday night at the Oscars we saw liberal Hollywood in all its radiant glory. Patricia Arquette decided to use her time at the podium to advocate for women’s equality and equal wages. Ironic considering the millions of dollars that these female celebrities make. Do these Hollywood women really feel as though they are facing gender discrimination and as a result make less money than male actors? Or, do they just say these things to promote the Left’s agenda?

Interestingly enough, the morning after the Oscars an analysis compiled by the Washington Free Beacon was released to the public. It revealed that Hillary Clinton—the left’s iconic champion of this “war on women” rhetoric, paid her female staffers 72 cents for every dollar paid to male staffers. While Clinton was a Senator the median annual salary for a woman working in Clinton’s office was $15,708.38 less than the median salary for a man. How shocking! I wonder what Patricia Arquette, Meryl Streep, and Jennifer Lopez would say about these findings.

Not only does Hillary Clinton say that all women deserve equal pay, but she goes so far as to accuse the right for not advocating for it—which seems highly hypocritical. There are hard-working women all across America and Mrs. Clinton tries to tell them that they aren’t valued by society, yet she can’t find it in herself to pay her female staffers equally.

Liberal progressives have used every tactic in their playbook to pin create a faux “war on women.” We’ve heard the same tired rhetoric and talking points from Obama and his administration regarding this fictional war on women. Last summer it was reported that in Obama’s White House the average employee earns $88,600 while the average female earns $78,400—a 13 percent disparity. Oh my! Obama even went so far as to advocate for the Paycheck Fairness Act—while would narrow the “fictional” pay gap between men and women. Needless to say Obama should’ve taken a look into his own administration before championing such legislation.

The liberal and Hollywood war on women rhetoric should be called out for what it is, a complete lie. Liberals are obsessed with gender disparity, but yet they are the ones objectifying women. Hollywood should start taking a look into the messages that they send to young girls and women—maybe the real war on women exists there. Liberals and Hollywood elitists can’t have it both ways.

As a young professional woman myself, I think I speak for many women when I say stop the nonsense. Stop parading women around on the campaign trails, and stop making an issue out of nothing. Women are hardworking, self-reliant, and command respect. Women are not helpless victims looking to be rescued by the federal government its programs.

It’s a fact of life that some professions are more lucrative than others and it contributes to differences in salary—but this is not gender based or discriminatory. Once all factors are considered, women are on the same playing field as men. Women are earning more degrees than their male counterparts but somehow still liberal progressives and Hollywood actresses rally around a ridiculous gender disparity rather than celebrating women’s accomplishments. Look how far women have come in society and in the workplace.

Hollywood and liberals everywhere need to stop the worn-out talking points and begin using their time at the podium to advocate for women in countries that are truly suffering for equality.