Arthur Schaper
|
Posted: Mar 08, 2018 9:00 AM
Share   Tweet
The opinions expressed by columnists are their own and do not necessarily represent the views of Townhall.com. 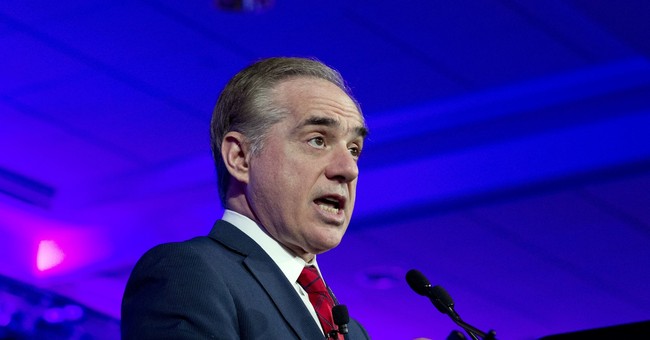 David Shulkin, the Trump Administration’s nominee and then confirmed secretary for the Department of Veterans Affairs, worried me from the start. In February 2017, at his first confirmation hearing, he declared that the VA “will not be privatized under my watch.” Bursts of applause filled the Senate Committee Chambers. The Washington Post focused on the dissonance of Shulkin’s statement with the White House’s intended goals to expand private care as well as access and accountability. The proper focus should have been that one more cabinet secretary would not address the fundamental problem at the VA.

It doesn’t help that he was an Obama appointee, either, since during Obama’s tenure veterans died on secret wait lists or were abandoned, left for dead in showers. Now Shulkin faces heavy criticism for charging his wife’s travel to the government. He declares that he was faithful to all ethical guidelines, and his chief of staff formally announced her retirement. In effect, she threw herself on the grenade to shield her boss. That magic word “retirement” indicates that her stepping down is not even a punishment. But wait! There are more reports of misused dollars and expensive trips all over the world taken by the “esteemed” Secretary. UGH.

Shulkin also faces fire from an Inspector General report on the operations of the VA. The internal watchdog slammed Shulkin for failures during his prior tenure under the Obama Administration to deal with dirty supplies in one major hospital. Why should this unchecked incompetence and disregard surprise anyone? Obama got away with a decrepit, poorly running VA system throughout his administration, especially because the press never hammered him about it. The mainstream media focused on General Shinseki, who ended up resigning. The buck stopped there. Such was the complicity of the fawning, left-wing press dedicated to cover for their Golden Boy at all costs.

But wait! Shulkin promised Republicans he would do a better job under the Trump Administration, right? Wrong. Still our veterans are not getting the care they need. Last November, lawmakers repeatedly blasted the never-ending efforts of upper management to protect bad medical personnel instead of getting rid of them. Congressman Bruce Poliquin (R-Maine) couldn’t contain his shock at the criminal cover-up: ““I think you’re protecting your butts; That’s what I think’s happening. This mismanagement is breathtaking.”

Yes, indeed. Again, we are talking about another bureaucracy, even if they are supposed to address and care for the men and women who sacrificed the most in caring for us. The VA is still a government entity. There are no market mechanisms, no quality controls based on price or profit. The only incentive for any reforms to take place fall into one of two categories: pass more laws or elicit change through intense scrutiny from the press (HA!) and third-party special interest groups.

Passing laws has failed spectacularly on another front, viz. the Brentwood VA in West Los Angeles. The facility languished for decades under long-time liberal Congressman Henry Waxman. Only when he faced his toughest re-election fight in 2012 did he pay attention to the Brentwood VA. For too long, the administrators and the agency as a whole were not directing use of the beds and the on-site housing for the veterans. Private companies were implementing solar panels, laundry services, and even a school open on the property, but what about the veterans? Los Angeles County has the largest population of homeless veterans in the country. This tragedy hasn’t improved, even with more legislation demanding stricter oversight and more money.

The uproar is bringing a critical mass demanding real chances for veterans’ health care this year, and we have a president who honestly cares for our veterans. How are things working out now? Last year, Shulkin declared his willingness to privatize health care somewhat, to bring in more competition. To his credit, perhaps, Shulkin is also firing three executives and consolidating oversight power over VA’s in 12 states into a new executive director in Washington DC. I have no problem getting rid of administrative overhead, but how does consolidation of power into Washington DC ensure better oversight, management, and correction in far-flung VA hospitals all over the country?

Of course, the bigger issue isn’t just that Shulkin is under investigation. Critics fear that his removal would signal a successor who would more likely push for privatizing the VA, and some veterans groups are unhappy with that. This is crazy. Privatization is precisely what is needed.

Socialized medicine, thy name is the Veterans Administration. If you want to see what single-payer, government-run health care looks like, look at the VA. What a shame. What a sham, and it’s time to pull the plug on this scam and the Scam Artist in Chief David Shulkin.

We need to rethink how this country serves our most deserving. They put their lives on the line in fields of battle and foreign theater. Then we expect them to line up for the DMV version of medical care, complete with long waits, bad service, inattentive staff, and criminal intent. A friend of mine from North Los Angeles County has to drive to Van Nuys for health care. As a veteran, he wanted to proudly display the American Flag on his back. Federal police on the property told him to stop, then took down his name and information, as though he was some common criminal.

In 2007, The Walter Reed Institute was forced to shut down following disturbing revelations of unclean colonoscopy scopes and rotting walls. The whole VA is rotten from top to bottom, with political appointees and bureaucrats out to safeguard their jobs rather than the save the lives of our distinguished military.

If President Trump really wants to make Veterans Healthcare great again, he needs to fire Shulkin and decommission the VA. This move would not just drain the swamp but ensure that our military get the care they need through private firms offering better care. Now’s the time. Our veterans deserve better, and they cannot wait any longer.