Our Anglo-American Heritage: Liberating, Not Racist

Arthur Schaper
|
Posted: Feb 15, 2018 12:01 AM
Share   Tweet
The opinions expressed by columnists are their own and do not necessarily represent the views of Townhall.com. 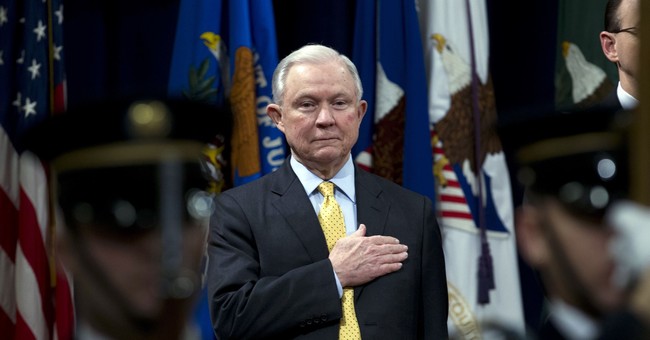 In spite of a controversial first year with some setbacks and delays in enforcement, United States Attorney General Jeff Sessions has conducted a successful administration of the Department of Justice with restored enforcement of our nation’s laws. Despite his diligent efforts in cracking down on illegal immigration, gang violence, and sex trafficking, the liberal press focuses only on the fact that he is a white, male southerner. That’s racist and sexist in itself. Then this past week, they slammed him on their front pages again because he praised the “Anglo-American” heritage of our nation’s sheriff and their department.

Laughably and predictably, charges of racism emerged immediately, along with references back to his stalled nomination to the federal judiciary in the mid-1980s. Only Because of spurious accusations that he had made racial comments, including calling a black staffer “boy”, Sessions’ nomination was rejected. Let’s debunk those baseless smears at once, As Alabama State Attorney General, Sessions sued and bankrupted the KKK. He also fought to implement full desegregation of the Alabama public school system. Cased closed, revoke the Democrats’ race card.

If anything, the press needs to learn their history.

As to the statement in question, Sessions’ reference is not racist at all, but a glowing reminder for all of us that our culture is drawn from a rich legacy, fought over centuries, to enshrine power to individual citizens while protecting natural rights.

First off, let’s recognize the context of Session’s “sensational” words. He highlights the tradition of the voters electing their law enforcers so that they are accountable to the people. This aspect of self-rule and local control is essential to a vibrant, free society. We shouldn’t be surprised that the liberal press mocks the long-standing custom of the little people electing their rulers. The media has been fawning over North Korea’s well-dressed cheerleaders for the last two weeks in the Winter Olympics, ignoring the unspeakable atrocities of that brutal communist regime.

Second of all, the Anglo-American tradition which Sessions referred to is as anti-racist as it gets. That’s what makes the tradition commendable, praiseworthy. In her contentious yet enlightening interview with Jorge Ramos discussing on immigration three years ago, Ann Coulter talked about the “Anglo-American” culture which esteems women and children to the highest degree. She later rebuffed a young Latino conservative about the need to vote for leaders based on principle, not blood line or skin color. “This blood thing, not really a part of our Anglo-Saxon tradition”. Poor, corrupt, unfree countries have leadership which appeals to the masses based on ethnic ties or color, not the rule of law or inalienable rights.

The Anglo-Saxon, Anglo-American heritage is replete with examples how individuals working together, i.e “the little guy,” stood up to reprobate monarchs and rampant abuses of power.

The significance of this document is that lower-ranking men stood up to their king, refusing to allow him to bully, rape, pillage, and dishonor them in their own country. Although this charter focused on the interests of barons as opposed to serfs and other less-propertied classes, the document signaled that men who were less than royalty or part of the ruling class in any country or community did not have to submit to the arbitrary will of the ruler. This development is unprecedented, as such political assertion had not occurred in Continental Europe or elsewhere.

Yes, this movement toward liberty occurred in England, so that makes it “Anglo.” That’s not racism or jingoist ethnocentrism. It’s a historical fact.

The British people had already endured rebellion, the Republic, and then Restoration. They refused to regress into another tyranny. Parliament extended an offer to Prince William of Orange and his wife Mary, the daughter of King James to rule in place of the increasingly isolated, unpopular monarch. With relatively little military conflict, James fled for France, William and Mary became joint-rulers, and Parliament established their growing supremacy over the monarch. The people took on more power, and outlined further limitations on the head of state.

This Anglo-Saxon heritage is not racist, but worth rejoicing about!

From these political movements, and the documents which enshrined the will and rights of individual citizens, the Framers of the Declaration of Independence and the United States Constitution (themselves English citizens asserting their rights against the British Crown) drew further inspiration, outlining a system of government based on checks and balances; the diffusion of power among individual citizens, the several states, and the federal government; and the protection of life, liberty, and property.

Because of the lack of proper civics training in our current public education system, younger generations are leaning toward fully democratic institutions, collective attitudes, and socialist economic policies, all of which tend toward despotism rather than individual liberty. They even view as racist the very political heritage which has recognized and protected their freedoms.

A free society depends on the recognition of established, plenary, and eternal principles, in which there exist equal rights for all, special privileges for none, permitted expression of individual liberties, and a process for enforcing the law while respecting due process. The Anglo-Saxon legal and cultural traditions which AG Sessions alluded to make those political ideals real. Attorney General Sessions has nothing to apologize for.