The Monumental Problems Facing our Country

Arthur Schaper
|
Posted: Aug 19, 2017 12:08 AM
Share   Tweet
The opinions expressed by columnists are their own and do not necessarily represent the views of Townhall.com. 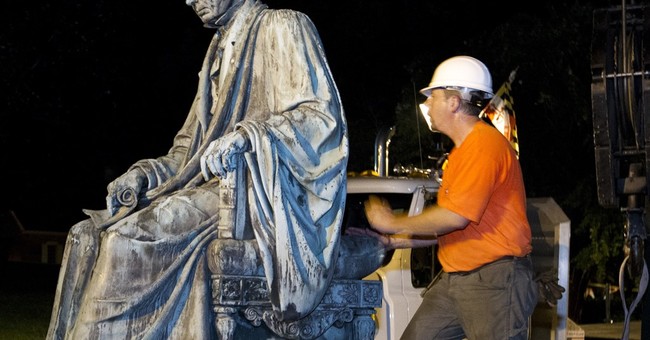 Business is booming. Job productivity is up. Despite the left-wing lies that coal was not coming back, miners are mining like never before. Industry is rebranding and expanding, and educational reforms are underway with Betsy DeVos and her team in the Department of Education. Trump has trumped the media yet again, refusing to cave to calls of racism or demands for an apology because he did not immediately condemn white supremacists at the Charlottesville, Virginia rally. Why should Trump care? The race card has become so played out, and new media reports are debunking this narrative.

Instead of talking about Fat Boy Kim Jong Un backing away from his bellicose rhetoric, or the massively declining illegal immigration problem which used to overwhelmed our borders, the media are hyping up the fading White Supremacy movement and discussing whether to take down Post Civil War era monuments. Our country is fracturing, but it’s more like a necessary corrective, like a new generation of Americans breaking out of their shells. But let’s talk about the explicitly monumental problem for a few minutes.

The leaders of Baltimore, Maryland decided to remove statues in the city which commemorated Confederate soldiers, officers, etc. Honestly, it makes sense to remove these statues. These men acted in open rebellion to the United States. They explicitly defended slavery and wanted to rip the country apart. It’s no secret that Democratic lawmakers after the Civil War wanted to champion their inveterate confederates. Take them down! These statues do not represent our country or the state of Maryland.

I just read today that the Maryland State legislature decided to remove the bust of Supreme Court Justice and Maryland native Roger Taney. This man was the politically slanted Justice who decided that “Negroes are a subordinate class of human beings with no rights which a white man was bound to respect.” A Democrat and a slave owner, Taney’s temper tantrum in the 1857 Dred Scott decision further divided an already distempered country writhing over the slavery issue—one which had to be resolved by bloodshed on fields of battle all over the nation, including the streets of New York City.

Monuments are not exactly the best way to preserve our historical heritage, anyway. Nietzsche pointed out in his seminal text “The Use and Abuse of History” that monuments allow man to commemorate great deeds, but cover up the hard work and pain which major historical figures encountered to accomplish what brought them great fame. Monuments can give a community a false sense of pride. We celebrate what they did, but are we willing to fight for and defend their principles with the same vigor?

I would further submit that monuments have this inevitable tendency to enshrine what is good about someone without recognition for their failures. Why else would anyone build a monument to another, if they would have to remind the present and future community about their failings? Battles deserve to be commemorated, though, because they helped forge the values and identity of the country which they fought for. There is no greater show of devotion than a man laying down his life for his homeland. President Trump rightfully donated his salary to preserve Gettysburg. I hope that the non-stop guardians for the Unknown Solider remain vigilant.

Ultimately, monuments are about ideas, not just about the people depicted. Martin Luther King Jr. received an extended honor at the Washington Mall, even though Maya Angelou felt that one quote on the marble piece was poorly placed. It was welcome news that liberal Seattle mayor permitted the removal of a statue of Vladimir Lenin. That monument should come down! Ronald Reagan demanded that Gorbachev “Tear Down This Wall!” a symbol of Soviet oppression. On the eve of the American Revolution, colonists tore down monuments to King George III. The Iraqis gleefully removed statues to Saddam Hussein. Following exposure of his complicity with covering up child sex abuse, Joe Paterno’s statue was also removed from Penn State. Aren’t we glad that they are gone? As new revelations manifest about the truth and error of our status as citizens, we learn more about our history and the legacies we want to celebrate. It makes sense to tear down or remove certain statues.

But won’t these sudden removals obliterate our society’s historical knowledge? What I have learned is that the harder that nefarious interests try to hide or cover up historical humiliations, the more evident they become. Adolph Hitler once quipped “Who remembers the Armenians?” referring to the 1915 genocide. The answer? The growing cohort of Armenian-Americans along with the entire nation of Armenia, and historians around the world. Holocaust denial may have reached a fevered pitch, but proof of the Holocaust has become more ample than ever.

Ultimately, The Battle of the Monuments is really the desperation of the Democratic Party and their new domestic terrorist wings (including Antifa) to undermine the President and force an ongoing narrative that Republicans, conservatives, patriots are racists, and those “racists” must prove otherwise. This line of attack is never-ending, an arrow in the quiver of Cultural Marxism to further undermine our culture of life and liberty.

If Republicans in Washington had more backbone instead of supine spine, they would applaud the removal of these Confederate monuments, reminding the country that these were all Democratic slavery sympathizers. They would also praise President Trump for standing his ground, blasting the violence on both sides at Charlottesville, particularly from the Alt-Left. Trump even predicted then condemned where this monument-bashing movement would lead to: “Are we going to take down George Washington’s statue next?” My response is an emphatic “No!” Why? Even though he did own slaves, Washington fought to establish a new country, conceived in liberty, dedicated to a political culture which would eventually set slaves free and ensure the longest-lasting constitutional republic in world history.

Republicans, not just elected officials, should follow Trump’s lead. Imagine how quickly the argument over monuments would dissipate from the national forefront.