Arthur Schaper
|
Posted: Apr 01, 2016 9:40 AM
Share   Tweet
The opinions expressed by columnists are their own and do not necessarily represent the views of Townhall.com. 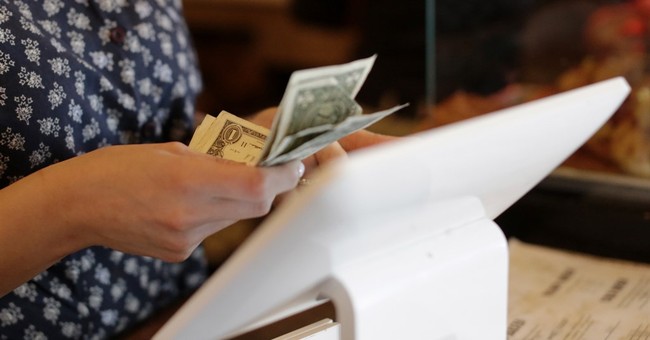 The Golden State again proves that all that glisters is not gold. The state assembly just passed a $15—yes, a 50% increase—minimum wage bill. The state senate will soon follow, and Governor Jerry Brown promises to sign it.

There were shining examples of fiscal and moral sanity in Sacramento. State senator Jim Moorlach (R-Costa Mesa) mocked this progressive fantasy with his accounting accountability: “Businesses will read the headlines tomorrow [April Fool’s Day, coincidentally!] and ask: ‘Is this a joke?’”

Nope. It’s California’s illiberal lunacy (Moonbeams and all) shining out, a city sitting on a dunghill.

My assemblyman David Hadley (R-Torrance) itemized not just the economic devastation such a wage hike would wage—but the creepy backroom deals which rushed this bill onto the legislative floor.

A deep sigh was uttered by all the businesses still standing in California. These left-wing agenda points just won’t die. They resurrect until they kill off the goals they sought to achieve. Weekend at Bernie Sanders and Madam Hillary still debate single-payer healthcare, government subsidies, bailouts for big banks and big businesses. Why shouldn’t the bastion of abject Democratic despotism push another pinnacle of “social justice” (in reality, economic injustice, especially to the poor, young, and disabled)?

These are disastrous government interventions, and yet politicians continue preaching the good of these execrable policies. What is happening to California? The country?! I mean, I know that economic illiteracy runs as rampant as corruption in Los Angeles or the botox dollars in Beverly Hills, but really?

The staggering ignorance of economics should scare us. Instead, working men and women are getting angry. Costs of living have risen, and economic opportunities remain remote.

With a vision of raising standards or living, help poor working people, California Democratic lawmakers are forcing the minimum wage. Instead of paying attention to the real causes—government regulatory burdens, taxation schemes, deficit spending, politicians continue pushing short-term, feel-good remedies. In California, The Sacramento power-brokers are back-stabbing workings, while ignoring economic realities once again. They struck a deal, so that the minimum wage will increase by $.50 next year and a dollar more until 2022, when the minimum wage will stand at $15 an hour. To their credit, a minority of Democrats voted against this stupid, immoral, and unethical move: Central Valley Democrats (Republicans who don’t know it yet) and a few Orange County layovers still know how to count.

Los Angeles will still beat the state by two years, not just in a forced wage hike, but more businesses and taxpayers forced out, too.

Young people will see entry level opportunities disappear. Businesses will hire robots instead, or watch a vast of non-intellectual property professions ditch California.  Fast-food restaurants are already experimenting with automation. A McDonald’s in Arizona was already using automatic kiosks for taking orders. Grocery stores have self-check kiosks for small orders. Will shoppers find robots scanning their goods in the near future, too? The inanity of these government interventions in to the marketplace is just mind-numbing.

Don’t these politicians care about the damage they are doing? The opportunities they are taking away from a new generation of employees? By then, one has to wonder: will there be any jobs left?

I worked for a few years in a grocery store. Almost three years.

Every six months, per the union contract, I would see a small bump in my pay. Every time the state shoved the wage up, I noticed that the price of goods went up. My rent also increased. The $1 dollar menu disappeared at all the fast-food joints.

One of my co-workers, a recent graduate from Redondo Union High School, first heard from me how debilitating a forced wage hike would be for future workers. Not just the rising cost of goods, but rising Unemployment. Employees with more experience either get nothing or enjoy a small raise in their pay. So many potential employees never realize their potential.

A simple economic survey on the Internet, or a cursory reading of an economic textbook will demonstrate: raising the price of any good or service will lead to a decreased demand for the same. So, raise the price of work to $15 minimum? Watch the decreasing number of employees.

What happened in Sacramento, that led to this statewide push for another demented jump into a very lame idea? The labor unions and their Democratic puppets struck a deal. The uber-liberal state senator Mark Leno (D-San Francisco, No relation to the former Tonight Show host) led the charge. his demand for a forced wage hike is laughable, but its consequences are anything but funny.

Unions protect unions. They do not care about the next generation of workers. They only care about their limited political hegemony. Since Big Labor still rules the state legislature, of course Californians are going to see an outrageous wage hike.

Check out what happened in the capital city of Sacramento? Its own city council had voted on a forced wage hike. The audience that October night last year vehemently opposed the idea. KCRA reported on the 90% opposition from the audience! Workers as well as business owners protested the policy, even though Mayor Kevin Johnson still wanted to go through with it. Workers are uniting—in opposition to a policy which kills economic opportunity.

Who is benefiting, then? Why go through with something so vehemently unpopular?

Labor unions wants to protect their current members. More importantly, they want to protect the easy stream of union dues and the political hegemony it buys. It’s all about power. Why else would California Democrats push the wage hike?

This year, Democrats who run a business, still pay bills, spend their own money may find themselves voting against a party which has long left them behind. Millennials in my hometown already know (and feel) the pain of these forced wage hikes (skimpier job prospects). Perhaps this latest foray into economic stupidity and political arrogance will induce voters to tell California Democrats to take a hike, too—out of office!