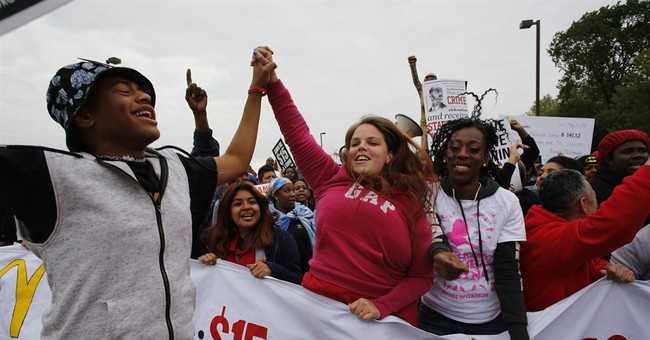 Not content with waiting in the wings while Seattle, Washington pursued the progressive ideals of minimum wage hikes, LA City Council has just agreed to drive up the minimum wage to $15 an hour by 2020.

Let’s be clear: governments do not raise wages, but force businesses to make hard decisions to manage growing costs. “Raise the wage” is a misnomer. No question about it, LA City forced the minimum wage.

This measure was greeted with labored enthusiasm from the Labor Unions, who have bought and sold nearly every politician in the Los Angeles area, including former City Comptroller (and failed mayoral and congressional candidate) Wendy Greuel as well as current mayor Eric Garcetti, former councilman. Union money flooded the LAUSD School Board run-offs, too. Anyone can attest to this pervasive political dynamic in Los Angeles, where outsider populist native boy Joe Buscaino of San Pedro chose to support and talked up LAUSD School Board incumbent Richard Vladovic, despite Vlad’s controversial record and questionable conduct.

The moral of this LA story? Have union money, say and do anything to get elected and get on the good side of those elected with the money. Money talks, especially when it belongs to someone else, and you get to keep most of it.

Now, I share that most of the politicians have been bought, but not the Republicans so far, and yet there are so few conservatives representing anyone in the LA area, unless they represent areas in the Northern part of LA County, like Mike Antonovich, followed by Assemblyman Tom Lackey, and then Congressman Steve Knight. No one should be surprised that Northern Los Angeles County, from Lancaster to Palmdale and throughout Antelope Valley, is looking for any means to break away from Downtown illiberal lunacy and become its own county or join with Kern County right to the North.

And of course, who can forget David Hadley of the South Bay? No special interest money there, but let's hope that he can hold his assembly seat in 2016.

At any rate, now that the City of Angels listened to its lesser, baser angels, the four million strong metropolis is slouching further towards economic stagnation. California Republican Committeeman Shawn Steel called Los Angeles "increasingly the magnate for poverty growth," and this wage hike by city council fiat will only make the financial quandary worse.

Did anyone in the LA City Council bother to consider what happened to Seattle when the city forced the minimum wage then? Mayor Eric Garcetti apparently didn't, and why would he bother, anyway? He made nice with the Department of Water and Power, even though he had campaigned as the anti-union outsider.

What did happen in the wet city of the Northwest?

Long-standing restaurants throughout Seattle are closing at a faster rate. More entry level applicants will find themselves without a job.

Elected officials have never run a business, and they do not understand how thin the profit margin of many restaurants tends toward. One article put the number at 4%. Only 4%? And now those businesses will have to decide how much more of this profit they can lose to stay in business. Americans are getting a crash course in basic economics, but this hurt first and learn something later approach is par for the course in major cities, where Deep Democratic micromanaging has been running large cities into the ground for decades, and particularly for Los Angeles County, the Obama-aggravated economic downturn has taken a turn for the worse.

Now, back to Seattle. What else has happened? Those who do keep their jobs, with the $15 an hour wage, find that all the perks have gone away. Hotel maids must pay for parking, and they get no tips, since the hotel rates are so much higher. They have to bring their own lunch and dinner, since the hotel had to cut costs and could not provide meals for the workers.

All the unsaid, unnoticed perks have gone away. Not a perky outcome. That $15 an hour salary did not translate into greater wealth at all. Even labor unions are admitting that wage hikes will increase unemployment. Talk about biting the hand that feeds you.

Is there any good news from the LA City’s forced increase? LA County’s surrounding incorporated municipalities will enjoy a major upswing in business. Imagine the Torrance hotels located on Torrance Boulevard receiving travelers appalled by the expensive hotel stays and staffing, Redondo Beach will burst at its seams, too, as will El Segundo. Inglewood is already planning a football stadium. Why not build a few hotels and restaurants, since all the out-of-work Angelenos will still need some way to pay their bills (legally)? Maybe the City of Carson will have something to boast about, instead of blasting the local paper for all the bad press against their city.

What a mess for Los Angeles, and fourteen of the fifteen city council members voted to make economic matters worse, so much worse. The only holdout against this economic self-mutilation?

In a statement, he said the council action could “make it impossible for entire industries to do business. . . The very last thing that we should be doing as a city is creating a competitive disadvantage for our businesses with those in neighboring cities.”

One can only hope that rising unemployment, costs of living, and general economic malaise will quicken Los Angeles’s better angels to retract the forced minimum wage. So far, Seattle Republicans tell me that retracting the forced wage hike is hopeless. Will LA’s failure change minds?

With powerful public sector unions, and the private union lobbies still as strong as ever with a surging immigration workforce, the city may require utter collapse, a la Detroit (with Illinois close behind) for that and other large municipalities to learn that even they, for all their size and celebrity, cannot outwit or outdo market forces, natural law, or the power of entrepreneurs to seek better business climates with their feet.