Arthur Schaper
|
Posted: Mar 13, 2016 12:01 AM
Share   Tweet
The opinions expressed by columnists are their own and do not necessarily represent the views of Townhall.com. 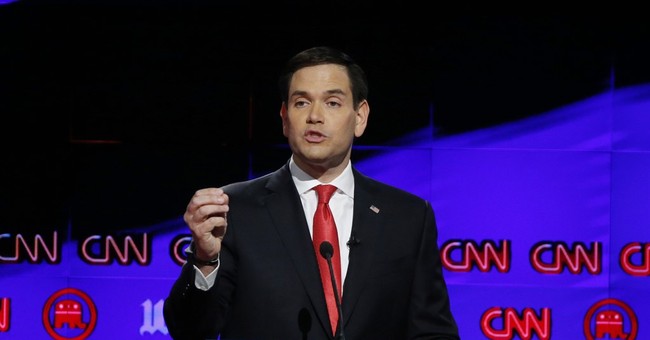 What is happening to the Republican Party? Is it fracturing? Perhaps. Is it growing? Definitely. Will it disappear and never be seen again? Only if the final convention, brokered or busted, gives way to disparate causes. The roots of this conflict were long in coming. Republican voters wanted conservative lawmakers respecting our rights and securing the borders. The GOP political class has repeatedly failed us. The discussions of an outright revolt like what we are seeing now have been long simmering.

Shortly after the disappointing 2012 election, and the devastating loss of Dame Margaret Thatcher, a few months later I congregated with fellow conservatives in Los Angeles. (Yes, we’re here, get used to it!) They were glum, unhappy, unsure what to do. “They’ve already banned the plastic bag!” one of them lamented.

The national conference continued to disappoint us on key issues. One lady suggested that every Republican voter register as independents at once to get the party brass’ attention.

The broiling turmoil is no longer hiding. Conservatives are not giving way anymore. We are not going to settle for more debt, just not as much.

Cut the spending, cut the tyranny, and cut the crap!

So, what’s really going on?

The bigger picture: the Little Guy is challenging the Big Shots, and winning. The conservative movement is gaining momentum and refuses to look back or hide away when times get tough, or the media refuse to play nice. The hard-working, free market advocates will no longer keep holding their noses for Democrat-lite, for socialism on a cracker with pâté. Mothers and fathers demand a better future for their children, and they will fight for it.

The grassroots activists, the small business owners, the hard-working families, and the overwhelmed taxpayers want a fair deal and free trade. They want limited government, and it must mean more than slowing the growth of spending. They will no longer take "No" for an answer from the government which exists to protect the public interest. They will not permit the Constitution to serve as a set of meager suggestions for a corrupt and entitled political class.

They want more local control, which requires a diligent effort to cut Washington down to size and make our Main Streets and civic centers the center of American life.

While Donald Trump has manipulated the electorate’s anger, Ted Cruz best represents their spirit. Today, Cruz has already forced the Establishment into a tough decision: bow down, or bow out. Whether they like it or not, the strongest--and best--alternative to Donald Trump is US Senator Ted Cruz.

The Washington power brokers, the K Street lobbyists, and every major interest which profits from cronyism and collusion have failed to get rid of this Constitutional champion. He is a disruptor, wants to be the chief enforcer; someone who stood on principle, and still does. When he campaigned against power for power's sake, he meant it. And still does.

Some of his critics have cited his ineffectiveness. Others have pointed out his showmanship which borders on brinkmanship. "How can any man govern as President if he routinely stops routine in the US Senate and stifles the passage of legislation?" The Establishment mutters over and over.

And yet, what message have the voters been sending to Washington for the past six years? “Stop the insanity!”

They want an end to the Big Government status quo!

And yet it continues unabated, but rather abetted by cowardly lawmakers more concerned about the donor class than the voting masses.

This disdain ends this year.

Where will the Washington Establishment turn this time? Jeb is gone, and Rubio is joining him. They have Madam Hillary only, since she does whatever the Big Banks have paid her to do. She cashed in hundreds of thousands of dollars from the major stock brokers, who stalk homeowners with the blessing of well-connected bureaucrats in DC. Hillary is the perfect, pliant shill for every special interest, and thus she fits in perfectly with the Democratic Party, an amalgam of disparate ideologies looking to make a buck off of those who work.

Bernie Sanders is more honest about his warmed-over communism and en masse populism. His authenticity inspires the true believers in our nation's midst. They are not warming up to cold-shoulder Hillary.

The Washington Cartel, Big Business, Big Governor, Big Labor, and all the other government bullies are getting the punches back in their faces, and twice as hard!

Dear Washington Cartel, what are you going to do now? The red pill gives you Donald Trump, who loves to assault our eyes and ears on the TV. Like a loquacious dinner guest, he will eat all the food on your plate and spill his wine on your lap. Trump is out to have fun--all at your expense.

Then there's Ted Cruz. He is the bootstraps to billionaire, pit-to-the-palace father figure. He will let you eat the fruits and veggies that you need. No fine linen for you, but he will respect you enough to keep in your place and teach you to like it.

See, Ted Cruz is teaching the insiders that the government is for the outsiders: "We the People", not "We the Well-Connected".

We the People are coming back, and we will not be forced to the back.

Dear Establishment: Trump lies while laughing in your face. Cruz tells you the truth. You are no longer in charge, and you never should have been. You have to pick your poison, you not-so powerful power brokers. Why not choose the heavy discipline? It will work out for you in the end. Donald Trump will not only trump you, but double down on what you have been doing for the past thirty years. Except his authoritarian will benefit only himself.

Establishment, you are not getting amnesty that upends the rule of law.

Political cronies, you are not getting the bailouts we paid for.

GOP elites, time to take a hint: bow to Ted Cruz, or bow out for good!