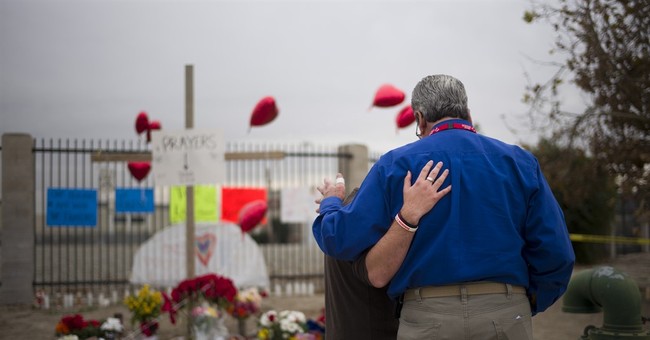 As soon as I learned about the shots fired in San Bernardino, there was no doubt in my mind: terrorist attack. Fourteen people dead, dozens more wounded, and these attacks are hitting closer to home for me. There was also no doubt in my mind that the media (and the liberal political class) would downplay (or desecrate) the severity of this massacre, then spin gun control out of these deaths. Lo and behold, the Occupant in the White House, Barack Obama, is clamoring once again for the same failed policies.

Instead of running from the fight, more Americans are stepping up and shooting back. On December 5th, I got into a shouting match with a Montebello, CA official, who claimed, like most unthinking liberals, that the guns are the problem. Chicago, Illinois, with some of the toughest gun laws in the country, has the highest murder rates, combined with rising crime, and the flight of working, productive residents out of the city. Repeat after me, readers: guns do not kill people; people do

What other lessons can we draw from San Bernardino?

Great compassion wells up within the American people following these terrible tragedies, and more Americans are tired of illiberal regressives politicizing these massacres to push their failed, flailing agenda. California Governor Jerry Brown had the brazen, unfounded audacity to claim that Nevada and Arizona’s gun laws created a “back door” of the San Bernardino attacks. Not true. Arizona Governor Doug Doucey demanded a retraction from Governor Moonbeam (or “Gun Grab”) for his insensitive remarks. The solution to this violence is not retreating from the Second Amendment, but defending it, and more Americans are defending themselves. Ben Shapiro advised readers to purchase a gun after the San Bernardino terrorism. Liberty University’s president advised his students into concealed-carry.

What else can we learn from these attacks, the attackers, and what to do in the future?

Who were these people? Syed Rizwan Farook, 28, and Tashfeen Malik, 27 perpetrated this wicked act on California soil. The left-wing HuffPo could only report what was there: “Prior to the attack, Malik posted on Facebook pledging her allegiance to ISIS, a U.S. law enforcement official told The Associated Press.” The Islamic State is taking credit and praising these “soldiers for Allah”. I have written this political incorrect fact before, affirmed by secular and religious authorities around the world: Islam has a problem, and its violent core needs to be addressed, exposed, and eradicated.

Could these attacks have been curtailed or prevented altogether? Apparently, yes. Another report indicates that neighbors in the region noticed suspect activities from this couple in their home. Yet even though they saw something, they said nothing and did nothing. Why? American Action News echoed the sentiments of Donald Trump on Face the Nation: “Such is the culture we live in, where a society that has been reminded every day "if you see something, say something" fails to do so because they live in total fear of being shunned as a bigot and a racist.”

Political correctness is killing this country. It really is. Dr. Ben Carson was spot on about this trend of shameful silence. The media and our elected officials are complicit in this refusal to call evil what it is, and its origins, all for fear of being shamed or shunned for speaking the truth.

Why does the Left and its patron saints, including the occupant of the White House and his would-be successors, push gun control, despite the rising tides of evidence (and bloodshed) exposing the policy’s rampant and unrecoverable failure? The Left has been about control of everything, and taking away the individual right to keep and bear arms is central to this agenda. Every crisis which inflames public opinion or sets communities on edge invites the Left and their gun control minions one more time to demand stricter enforcement and restrictions on the Second Amendment. Yes, yes, the Left never rests, never sleeps, never stops. Nevertheless, their raging against the Second Amendment fails, yet their fight never ends. Why?

The Second Amendment is a distinctly American reality, an invention and intention of our Anglo-Saxon heritage, founded on an essential distrust of the state. I have read the shirts on active Americans and the bumper stickers on social media and cars: “President Washington did not fight for this country with the First Amendment. He used the Second.” The American Revolution started with a “Shot heard round the world” of colonial farmers turned militia, not their fearful or angry shouts. The secular Left hates everything about America, and the Second Amendment is the defining element which they cannot stop attacking.

Furthermore, the Progressives in our midst remain convinced that centralized power in the hands of the few, elite, and academically educated will improve our society, and develop a better nature in man. Gun violence and premeditated murders from otherwise sound people – these developments shoot holes through the Progressive world view that man is basically good, but just needs a lot of intervention from the state to get better. All the background checks in the world, plus assault weapons bans and limits on registration and concealed-carry, will not curb violence, not remove the evil which lurks in the hearts of men. This inherent fallibility in human nature drives leftists to distraction, and they will stop at nothing to deny these humbling realities about mankind.

Despite the static nature of man, the restorative power of liberty and the rule of law overcomes these failings. More conservatives in California are fighting for the Second Amendment. Former gubernatorial candidate Tim Donnelly sparked recall efforts over the Second Amendment. Concealed-carry is rising in Sacramento, Los Angeles, Orange County, and throughout the state of California. California Republican Congressional candidate Johnny Tacherra is hosting a Smith and Wesson giveaway at his next fundraiser, too.

One more lesson from San Bernardino: California residents (especially conservatives) are not backing away from the fight for our rights, but stepping up, shooting back, and preparing to win the showdown.