The Supreme Court Is Not Supreme 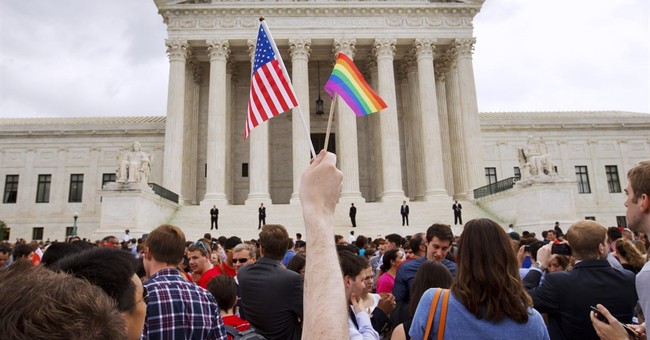 On Friday, the Supreme Court of the United States declared:

In another tortured five-four ruling, authored by Justice Anthony Kennedy (a wavering California Republican who has deliberately placed himself as a swing justice), the court invalidated same-sex marriage bans nationwide, arguing that the Fourteenth Amendment prohibits the states from discriminating against individuals who live out homosexual conduct, and want to culminate their behaviors with state-sponsored marriage.

So, gay marriage has been thrust upon the United States. Or has it? Even though the Supreme Court relied on specious legal arguments to permit abortion through their ruling in Roe v. Wade, the fight to protect life has not ended. Pro-life defenders have pushed back, informing people about the precious gift of life which begins at conception: a biological fact, not a moral nicety or a religious sentiment.

So, before conservatives, freedom fighters, and advocates for religious liberty panic, a little perspective is needed.

The Supreme Court of the United States is not the supreme authority on anything. Never has been, never will be. The Supremes have made supreme errors before, have overturned themselves, and sometimes have endured the low-key shame of being ignored altogether.

The Supreme Court has gotten it wrong before. In 1857, Chief Justice Roger Taney, himself a slave owner and hardly a disinterested party in the Dred Scott v. Sanford case, ruled that “negroes are a subordinate class of human beings with no rights that a white man is bound to respect.” Today, we have a black President, and African-Americans in all levels of public office and private commerce.

The SCOTUS once deemed that separate but equal facilities were acceptable, thus justifying segregation. They overturned themselves fifty years later.

During World War II, following Democratic President Franklin Delano Roosevelt’s Executive Order 9066, Japanese-Americans were subject to discriminatory curfews, and 112,000 were placed into internment camps for fear that they posed an internal threat to the country. In 1942, the Supreme Court affirmed Roosevelt’s discriminatory order in Korematsu v. United States. Forty years later, Republican Presidents Reagan and Bush I issued an apology and reparations to those Americans.

Not just based on its legacy, but by design the judiciary was never intended to rival let alone overturn the other federal branches.

In the Federalist Papers, Alexander Hamilton deemed the judicial branch to be the weakest of the “co-equal” branches. The Framers had never intended the court system to wield the wild authority to determine which laws are and are not constitutional, or to redefine culture or natural law.

Ironically, the first significant Chief Justice of SCOTUS, John Marshall, expanded the power of the Court by denying itself a power, in granting a writ of mandamus to a frustrated judicial appointee named William Marbury.

Even though Marshall had established the precedent of judicial review, never did he expect the Court to redefine institutions as basic, as fundamental as marriage. SCOTUS ruled in favor of the Cherokee Nation, that they did not have to leave their homes. President Andrew Jackson snidely retorted: “Justice Marshall has made his ruling. Let him enforce it!” Granted, not the best example, but the principle remains the same: The Court is not the final authority nor enforcer of any doctrine.

Returning to the Dred Scott decision, what occurred and what followed can offer conservatives hope. Obviously, the Court ignored the Declaration of Independence:

“We hold these truths to be self-evident, that all men are created equal, and they are endorsed by their Creator certain unalienable rights.”

The chief author of the Declaration, Thomas Jefferson, was a slave-owner, yet his status does not undermine the eternal condition that all men are created equal, regardless of their race or sex. The roots of our country supersede anything issued by a court.

In connection to this deeper legacy, the Republican Party formed to combat this judicial tyranny, which some of the Justices had resisted in dissenting opinions. Republicans also united to combat polygamy, to ensure the definition of marriage between one man and one woman. Yes, indeed.

With Dred Scott,Taney upended decades of compromise. Civil War ensued over the slavery issue, among other cultural and political concerns, followed by three Constitutional Amendments, which granted former slaves freedom, citizenship, then the vote.

Besides natural law, and the founding principles of this country, there is the Constitution, and the Amendment process.

Fast forward to Election 2016, and already one potential GOP Presidential contender, Scott Walker, has announced the need for a Constitutional Amendment to protect state sovereignty to define marriage. Declared candidate Bobby Jindal went further: “Let’s just get rid of the Supreme Court!” Perhaps an extreme view from the Louisiana governor, but the recognized principle remains: the Court is not the final authority.

Conservatives have embraced wins from SCOTUS, and shouldered losses. They have also won on other fronts. The SCOTUS setback over marriage does not mean the fight is over.

The Supreme Court is not the final authority. We the People are.