Gay Marriage Winning, But Freedom is Fighting Back 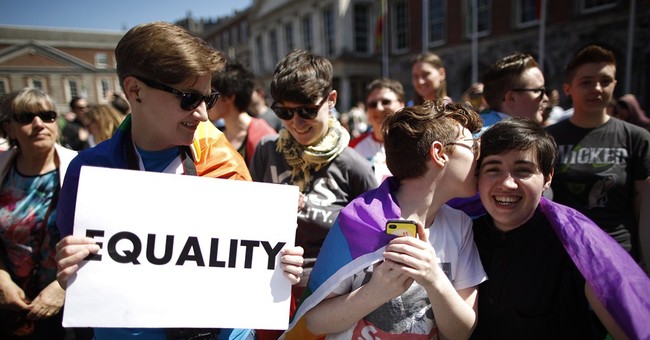 Yes, freedom-fighting conservatives have some recent developments to lament.

Homosexual marriage is becoming the mainstay across the country, or at least its culmination in statehouse and finally the Supreme Court seems likely.

In spite of the strongest push from pro-marriage advocates, Finland approved gay marriage.

Ireland, formerly known as “Winterland” to the Romans, and “The Celtic Tiger” to economists during the roaring gains of the late 1990s and 2000s, has said “I do” to homosexual marriage, as well. How the status of marriage could be so radically redefined, and by popular vote in one of the most Catholic countries in the world, has left many culture warriors shaking their heads, wringing their hands, asking the question: “Where did we go wrong? How did we miss this outcome?” With the best efforts, even from the most ardent of pro-family advocates, the polling seemed to indicate that true marriage would win out.

Is there any hope at the end of the six-colored rainbow?

First of all, the rising number of celebrities getting gay married is getting very little attention. Barry Manilow got married (to a man, not Mandy). Yawn. The novelty of this exercise in social justice is gone. There is a small yet diligent cohort of men and women who espouse conservative/libertarian values, yet also identify as homosexual. One of many left-leaning movements defined by its totalitarian intolerance, the Gay Left movement is leaving many otherwise conservative, right-leaning homosexuals behind. Their sexual behavior and feelings are a side issue. Breitbart’s Milo Yannoulis whines: “I am sooooo bored of being gay”. Sarcastic or serious, gays are starting to rethink the gay agenda.

Many people who lived homosexual lives are leaving the lifestyle. More Americans want live-and-let-live. Children of gay parents now report the negatives of their upbringing.

Another pressing reality has surged: the world has taken marriage for granted, and must learn once again what marriage is, and why marriage matters. Young conservative activist Stephen Crowder explores how marriage strengthens societies. The Heritage Foundation established that strong families keep children out of poverty, too. While the forces of cultural traditions and shame from our elders have failed, broken homes and breaking communities may bring to light the truth of why marriage, one man and one woman, matters.

Indeed, hate is not the answer, and no one who supports true marriage advocates hatred. The truth sets us free, and the militancy of the homosexual agenda has forced Western Civilization not just to question its basic principles, but finally to answer why they must endure.

From a political and legal standpoint, however, what is the endgame on “gay marriage”? What will happen to the churches, charities, and small businesses under attack from homofacsists?

Ironically, two deep Southern states have started pursuing legal reforms to rectify this sticky problem. The Oklahoma state legislature discussed a bill which would remove state marriage licenses, so that couples, gay or straight, would have to seek a clergyman or a notary public for a testimony of matrimony.

The aim of the bill is to get the government out of marriage-licensing activities and “leave marriage in the hands of the clergy,” state Sen. Todd Russ, the bill’s lead sponsor, said according to KFOR NewsChannel 4 in Oklahoma City.

I have met individuals who for all intents and purposes are conservative, aside from their sexual preferences. If live and let live will be the expanded norm in our society, then getting the government out of the institution should work with all concerned parties.

“First, it would render void the edicts of federal judges” who have overturned state marriage laws, the center said.

Second, it would get the state government “out of defining marriage” and end “the squabble between factions that seek to harness the power of the state.”

Not just Oklahoma, but Alabama has also taken the same step of getting the state out of the status of blessed matrimony.

The bill doesn’t prevent anyone from getting married — it merely means that no one has to apply for a marriage license first. A marriage must still take place with an accepted officiant, and two witnesses. The bill must still pass the State House, as well.

Since this legislation wouldn’t prevent same-sex couples from getting married, if marriage equality becomes American law, it’s clear that the goal isn’t to completely prevent same-sex marriage. Instead, perhaps Roy Moore and other Alabama justices are satisfied simply to feel absolved of ever giving permission for one.

Honestly, that is what freedom of conscience is all about: “to feel absolved” from having to participate in certain activities which violate your beliefs: officiate a homosexual marriage, bake a gay wedding cake, etc.

Case in point: a few months ago I engaged in a heated conversation with another conservative. He agreed that individuals may not necessarily be born gay (or straight), and that out of necessity individual Americans must strive to protect and expand religious liberty. The most important point he made to me, however, and subsequently a number of conservative activists, here in Los Angeles as well as across the country, is the need to pick our fights.

Just as Oklahoma and Alabama recognized the bigger issue, government tyranny imposing on individual rights, so too conservatives across the country should not skirmish with individuals or manifest groups attempting to redefine marriage.

As deacon Keith Fournier shared following Ireland’s “Yes” vote last week, marriage has not changed. Ireland has, reverting to a “pre-Christian” stance. Ireland can relearn the blessed principles of Western Civilization, the values of individual life and liberty, within the scope of a limited, God-fearing government. Let’s focus on relearning our liberty, getting undue government influence out of our lives.

Gay marriage may be winning small battles, but the war to define and restore liberty has only begun, and victory remains in sight.