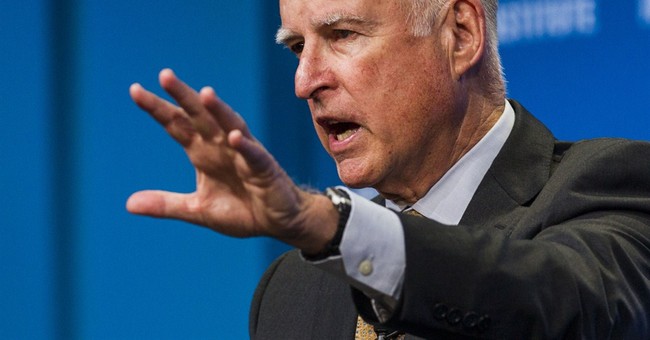 His first point of contact on this matter? The current Chairman of the California GOP, Jim Brulte:

“California is the leading edge of the country’s demographic changes,” Brulte said in an interview. “Frankly, Republicans in California did not react quickly enough to them, and we have paid a horrible price.”

That is true. Up to the early 1980s and the 1990s, California was a majority white state, Republicans did very well working the entire state. Other critics can rightly point out that the party structures got complacent, with easily redrawn Congressional and state representative districts which made it very difficult to remove an incumbent. Still, the demographic changes took the California Republican Party by surprise, and indeed they are playing catch-up.

The strange turn of Dionne's article, however, highlights the liberal columnists’ infusion of their left-leaning vision onto everything. They would prefer all political parties participate and promote that view. The Republican Party, by platform and legacy, is dedicated to a conservative standard, i.e. limited government, local control, individual liberty, small-scale constitutional form of governance.

In one flagrant example of this liberal bias, Dionne plays the race card to diagnose the California Grand Old Party's middling appeal to minorities:

The principal cause of the GOP’s troubles is its alienation of Latinos, Asian Americans and African Americans in a state whose population is now majority nonwhite.

This statement is disconcerting and false. Lack of outreach, yes. Offensive, alienating policies? No.

Before anyone claims that GOP stands for "Grandpas and Old People", a little history lesson about the California GOP is well in order. From its early stages as the opposition to the otherwise Democratic machine dominance in San Francisco and Los Angeles (where Confederate sympathizers attempted to secede California from the United States), the Republican Party boasted a diverse array of candidates. The first Latino Governor of California, Romualdo Pacheco, had started out as a Democrat, but left the party over slavery (he opposed it!), then became an elected Republican.

One of the latest (hopefully not last) Republican US Senators for California, Japanese-American S. I. Hayakawa unseated an absentee incumbent Democratic US Senator John Tunney in 1976. What bolstered the profile of this non-politician? His courage, when he stopped unruly black militant protests during his tenure as President of San Francisco State, despite ethnic cries of prejudice. His bold stance against disrespectful disruption gained the respect of conservative voters. He campaigned on a pro-America, keep Panama platform, and won in a year when Jimmy Carter upset incumbent Republican President Gerald Ford. (Ironically enough, the roots of failed GOP minority outreach began with Ford, who failed to re-charter RNC groups to reach out to Hispanics.)

Refusing to be defined narrowly by race, Hayakawa, a celebrated linguist and writer as well as outsider-politician, questioned paying reparations to interned Japanese-Americans during World War II, and even founded a lobbying group to promote English as the official language.

The California Republican Party already boasts a winning legacy with other ethnic groups.

Predictably, the party's more government-averse views jar with progressive Dionne and the Democrats whom he also interviewed for his column. No wonder they (and the media) counsel Republicans to go liberal: “Be like us, and lose more elections!”

Like many liberals, Dionne beats the CA GOP with the Prop 187 stick, claiming that the popular (passed by 57%) initiative to block public benefits to illegal aliens ended up alienating Hispanics. Despite this misleading information, Dionne still has to explain the growing array of California’s Republican state and federal legislators of Hispanic origin.

Congressman Ted Lieu (D-Torrance/Santa Monica), born in Taiwan, first elected to the Torrance City Council in the late 2000s, who mountaineered his way to federal office, commented that Republican opposition to in-state tuition for illegal aliens has hurt their brand:

“Republicans were saying, ‘Come support us, we like you, but we want to deport your children.’ ”

Another patently offensive remark with no factual basis.

What really “rankled” Asian-American voters? The Democratic legislature’s attempt to reintroduce discrimination into the college application process. Dionne did mention the CA GOP’s strong and growing outreach to California’s Asian-Pac communities, with an unprecedented number of Asian-Americans in the state legislature, all Republicans, evidently CA GOP leaders are learning from their past mistakes. By the way, there are more women in the GOP caucus then their liberal counterparts. Who is waging a War on Women now?

Before conservatives nationally or in California panic about the Republican Party’s future, a historical and political perspective is essential. For the CA GOP, the issue has been messaging, not massaging the truth, but more importantly punching back at the heated, racist narrative played out by the California Democratic Party for the past two decades (see one example here).

In 2014, Republicans already learned and applied key lessons. With wide-spread technological advances, a broader appeal through recruitment, outreach, and grassroots investment, the Grand Old Party is getting more than its well-deserved make-over. The National GOP needs to follow on those reforms in California, not take up the “advice” of liberal California Congressmen like Lieu, or liberal columnists like E. J. Dionne.