What We Can Learn From Storms

Armstrong Williams
|
Posted: Sep 19, 2019 12:01 AM
Share   Tweet
The opinions expressed by columnists are their own and do not necessarily represent the views of Townhall.com. 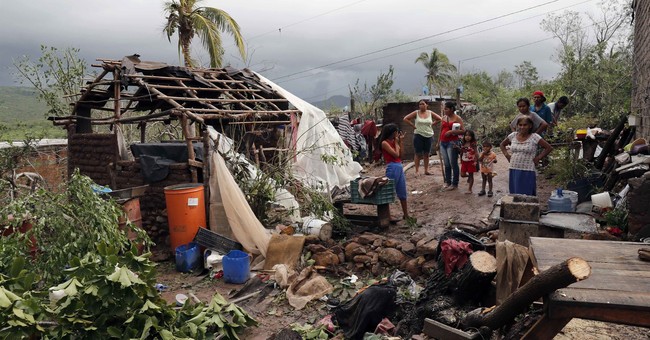 As Hurricane Dorian tore through the Bahamas, wreaking havoc and causing loss of human life and destruction of property in the billions of dollars, many of us sat transfixed before the spectacle unfolding on our television screens, wondering how nature could have dealt our beloved neighbor such a cruel hand. But the reality is we should not have been surprised.

We are in hurricane season, and in most years, there are dozens of tropical storms, caused by the confluence of cold Arctic air meeting warm tropical seas. Most years, those storms rage offshore in the middle of the ocean before petering out far enough away to avoid landfall. They rarely directly hit land, but that is more by happenstance than by design. The land mass of the Caribbean is dwarfed more than 9-to-1 by the surface area covered by water.

Even still, there have been epic storms in years past. Bahamians have been used to the ravages and the bounties of the sea. These islands were originally founded as pastoral colonies -- places where British navy, explorers and pirates alike would drop livestock, pigs and goats primarily, that could propagate on the rocky, sandy conditions -- so that they could restock their stores with fresh meat along their journeys. The islands were not intended to become major human settlements and were not, in fact, used as such until after the American Revolutionary War.

At that time, colonial plantation owners in the South (primarily South Carolina) who had sided with the British against American independence found themselves under some threat of retribution. As recompense for having supported the empire during the war, the British offered these plantation owners some of the uninhabited pastoral islands in the Caribbean -- including the Bahamas and neighboring Turks and Caicos. They arrived in the later end of the 18th century with their slaves in tow. But after several failed seasons -- having discovered that the harsh, rocky soil of these islands was far less hospitable to large-scale farming than the lush marshlands of the South Carolina low country -- they essentially abandoned their operations, leaving all of the slaves they had imported stranded on the islands, much like the livestock they had deposited over the previous centuries of exploration and conquest.

The descendants of these marooned former South Carolinians proved to be a hardy race indeed. Though stranded with literally not a boat or an oar, they managed to eke, by the sweat of their brows, a meager living from small-scale farming and fishing. They eventually built boats from driftwood -- and the remnants of shipwrecks that washed up on the islands in the aftermath of tropical storms. With these rudimentary boats, they learned to navigate the Caribbean seas by starlight and eventually became expert fisherman, wringing a significant bounty from the sea. With nothing on the islands to destroy, it seemed that the vicissitudes of nature worked largely in the islanders' favor.

Meanwhile, back in the Carolinas and in Georgia, those tropical storms slammed into the mainland with such force that they created massive flooding of the inland waterways. They created almost permanent swamplike conditions in the low countries. Those proved to be ideal for the planting of rice, and large-scale rice plantations arose in those areas. Again, man harnessed nature's awesome power to secure his earthly bounty.

But over time, as is usually the case in human civilizations, our bounty bred the seeds of our ultimate destruction. It happened in Egypt when man began to ignore the signs and erected technologies that could forestall the ebb and flow of the Nile. Moses had to lead the people out of that disaster once it became an epic flood. And it happened in more modern times in the Roman seaside resort town of Pompeii -- a city unrivaled to this day for its luxurious network of mineral baths, ingenious indoor pools and man-made fishponds. It was a playground for the rich, and it sat for more than six centuries at the foot of an active volcano. The volcano in Mount Vesuvius provided bounty, to be sure: Healing hot springs abound along its base, providing health and rejuvenation for the Roman elite. The Romans understood it was an active volcano but felt that their appeals and sacrifices to the gods would prevent its destructive force from destroying their manufactured heaven on earth.

When it finally blew its top in A.D. 79, Vesuvius caught the residents of Pompeii by surprise. The fleeing townspeople had just minutes to escape, and many indeed perished in the dark soot and ash even before the rivers of molten rock descended upon the town. Many centuries later, archeologists would find the entire town almost perfectly preserved beneath a thick layer of ash and limestone, pots on the stove, bread still in the oven.

Storms teach us that we can either work with nature or be broken by it. In the Caribbean, the damage wrought by storms is compounded by the overbuilding that has occurred on the islands. Rather than making a living off the fruits of the sea as their ancestors did, the modern Bahamas is built on the massive edifices of a global tourist industry -- creating man-made deep-water ports to house massive cruise ships, huge hotels and resorts. All are built on an island that could at any time be reclaimed by the sea. The building of deep-water ports cleared out many of the shallow reefs and cays that stood as a buffer against some of the tropical storm's power.

In the Carolinas, in my birth state of South Carolina in particular, generations of plantation farming in the high country -- Marion County from whence I come -- have eroded the natural forests and made flooding in the low country much worse. As in the Caribbean, tourist developments along the Carolina coasts have contributed to the erosion of beaches and the steady encroachment of the sea. Industrial pollutants from our factories have compounded the thermal effects of sea and air, in effect causing slower storms that dump far more water on the state than it can handle.

The effect of this attempt to defy nature rather than operate in harmony with it ultimately compounds the damage wrought by storms. We build what we believe to be permanent edifices on shifting sands, which all get retaken by the sea, eventually.