A Better Approach to a Worsening Iran Situation

Armstrong Williams
|
Posted: Jun 27, 2019 12:01 AM
Share   Tweet
The opinions expressed by columnists are their own and do not necessarily represent the views of Townhall.com. 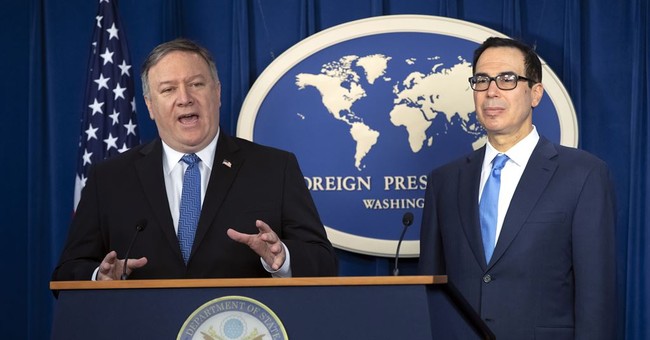 President Donald Trump's freewheeling style is one of the main reasons that Americans rejected the conventional candidates and instead elected him to serve as president of the United States. While he is undeniably entertaining and possesses personal magnetism that helped make him a business tycoon and television star, when it comes to his leadership concerning Iran, the stakes are too high for Trump to act as if he is performing in a reality TV show.

Iran is the world's largest state sponsor of terrorism. The Islamic Republic's dangerous tentacles reach worldwide, where it provides support to violent terrorist groups. The Iranian modus operandi is to sow chaos across the globe as part of its hegemonic aspirations. The unelected mullahs who control Iran are power hungry, fanatical in their devotion to a radical form of Islam and have demonstrated through their deception a deep-seated desire to develop the capacity to develop nuclear weapons. To prevent Iran from gaining more power, the United States needs a solid, well-thought out plan grounded in strategy and stability.

Make no mistake about it, Iran is one of America's most serious national security threats. We simply cannot afford to play games or act as if Iran's leaders are characters on television. Given the stakes, now is not the time to try to win the news cycle or the daily Twitter war or to behave in a cavalier fashion.

The ongoing brinksmanship with Iran has the potential to place the precious lives of American soldiers at risk in a protracted armed conflict, which is exactly why the recent escalation between the United States and Iran needs to be treated with the utmost gravity and caution.

We have all watched a series of unexpected developments unfold over the last couple of months, a tit-for-tat sequence that perhaps could have been prevented and did not need to come this far. In the past several weeks, the U.S. has implemented additional sanctions against Iran, Tehran has threatened to further enrich its uranium stockpile closer to weapons-grade, and Trump has announced that more than 1,000 additional troops are going to be sent to the Middle East as a result of mounting tensions with Iran.

However, there are two key straws that may have broken the camel's back. First, two oil tankers were attacked near the Strait of Hormuz; Secretary of State Mike Pompeo declared it a "blatant assault" by Iran. And later, a U.S. Navy drone was shot down by Iran; America says the unmanned aerial vehicle was in international airspace, while Iran claims that the drone violated its borders.

These two attacks are likely what prompted plans for a retaliatory military strike against Iran, which the president said he called off mere minutes before the attack was set to take place.

Now is a vital time for effective international diplomacy, trust in our intelligence experts and collaboration with our allies. When it comes to the Iranian nuclear threat, there isn't room for error or spontaneous impulses that lack strategy.

Instead of carping to the media about advice received from his national security advisers and others, Trump needs to act with measured thoughtfulness. It is disconcerting to observe that rather than planning and holding confidential conversations with top Middle East and military experts, the administration instead seems to be careening wildly from one option to the next, broadcasting each wild swing in real time via tweets from the president's personal handle.

The growing accumulation of mixed messages is confusing to our allies and creates a situation in which they do not know where the United States stands. And in the Middle East, the United States' decisions and policies should be a source of regional stability and security, not confusion.

Trump's words, his tweets and his policy decisions have real-world consequences. And what could be more vital than getting it right when we are talking about an avowed enemy of America pursuing the most destructive weapons the world has ever known?

I am not alone in this belief. Military officials, veteran diplomats, Democrats and Republicans have all urged Trump to halt this reckless approach. The issue of Iran is not a political one, because it is too important; lives are literally on the line, and America and the world cannot afford to get this wrong.

Now is the time for a course correction that sees Trump display the great resolve for which he is known. Throughout his presidency, Trump has displayed courageous and admirable moments of confidence and competence. That's what Americans need now in order to stand up against the unhinged and threatening Iranian regime.

The path to projecting strength is through consistent policies rooted in comprehensive planning and strategy. Halting Iran's pursuit of nuclear weapons demands common sense and care. Our president is more than capable of exuding these qualities in tandem with strength, and I hope that he starts doing so now.

Julio Rosas
House Republicans Joke About Who Should Be on Biden's SCOTUS Shortlist
Leah Barkoukis
ICYMI: GOP Governor Proposes a ‘Parental Bill of Rights’
Madeline Leesman
Oh My: Breyer Wasn't Planning to Announce His Retirement...So Who Leaked It?
Katie Pavlich