Brexit and the Future of US-Britain Relations

Armstrong Williams
|
Posted: Jan 31, 2019 12:01 AM
Share   Tweet
The opinions expressed by columnists are their own and do not necessarily represent the views of Townhall.com. 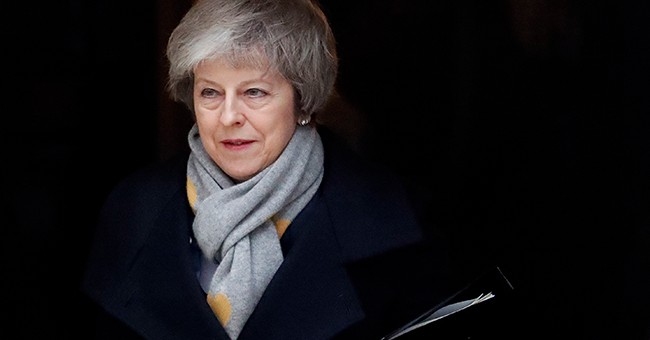 The future of Brexit, England's historic divorce from the European Union, hangs in a precarious balance. Last week, British Prime Minister Theresa May's Brexit plan failed miserably when put to a vote in the British Parliament. May's "soft exit" proposal failed by a whopping 230 votes, prompting many to predict that May's tenure as prime minister was officially doomed. However, the next day, members of Britain's labor party failed to mount a no-confidence vote, which would have challenged her continued leadership. As things stand, May remains the leader, and Britain remains committed to exiting the European Union.

But the stakes for all involved just got higher. At issue is the reality that a significant portion of the British GDP -- approximately 12 percent -- comes from trade with the EU. Britain, having invoked Article 50, has until late March to negotiate a deal to leave the union or face a "hard exit," which would essentially cut Britain off from all trade within the EU.

At stake for the United States is our own trading relationship with the EU and, perhaps more importantly, our ongoing "special relationship" with Great Britain. At this point, the U.S. has signaled that it is ready to enter into a beneficial bilateral trade, relationship with Britain, which makes sense, after all. The U.S. is already Britain's most significant trading partner. Many U.S. nationals work at British companies and vice versa. Investments between the countries amount to an estimated $1 trillion.

There is, however, more to the special relationship than the economic benefits of trade. England has been America's primary contact with the EU, facilitating America's priorities vis-a-vis Europe and NATO. Part of Britain's discomfort with the EU's structure was Germany's ascendance as Europe's most important economic and political power. England has longstanding antagonism toward Germany, dating back to World War I, and German excesses in World War II are still on the minds of many Britons, who do not want to live under Germany's shadow. As England continues to attempt to gracefully leave the EU, the U.S. will have to develop other allies within the union, which will potentially diminish Britain's influence upon the U.S. with respect to European affairs.

Some U.S. political conservatives fear that Britain leaving the EU provides an opening for antagonistic forces such as Russia, which has been courting many of the Southern and Eastern European nations with access to Russia's vast natural resources. It also remains to be seen whether the EU can even survive in its current state without a strong Britain anchoring it to a pro-West stance.

Trade, however, remains the big ape in the room. While a considerable amount of Britain's trade is with the EU, the growth of this trade has averaged about 1 percent over the past five years, while British trade with the rest of the world has rapidly expanded. Once unfettered from the EU, Britain has the leverage to make even more substantive bilateral and (in some cases) multilateral trade deals with the world's emerging economies.

As things stand today, the World Trade Organization rules are facing a brave new world. The EU's technocratic, rigid and red tape-laden trading policies are ill-suited for a rapidly evolving global economy. The WTO dispute resolution mechanism, on the other hand, is woefully inadequate to protect intellectual property or the rising tide of protectionism, especially given China's volatile trade policies. Furthermore, most of the trading policies adopted by both the U.S. and Britain do not directly punish countries that refuse to open their economies to goods coming from the two countries. President Donald Trump as already drastically reoriented U.S. trading policies to force its largest trading partners -- China, Canada and Mexico -- to open their economies to U.S. goods and services or face significant reciprocal trade barriers. Despite heavy criticism from both Democrats and Republicans, evidence shows the Trump's trade policy is moving the process along in terms of forcing China to come to the table to make a better deal.

At the end of the day, Britain leaving the EU is about expressing the democratic will of the British people, who voted to leave the union. As one of the world's oldest democracies, Britain is showing the world that the elites in government should not decide matters of national concern; the will of the people should dictate how they are governed. Europe's technocratic centralized administration proved to be not only ineffective in staving off economic crises -- its intended purpose -- but impervious to the democratic instincts of the European people.

The U.S. is facing similar tension, with Americans largely rejecting centralized government control and overregulation and seeking to instead vest more power in local governments. The Trump administration has already eliminated more tedious pieces of regulation in its first two years than any other president in recent history. The soaring U.S. economy is seen as proof that unfettering businesses and citizens and allowing them to act in their own economic interests is a potentially powerful tool for economic progress. With growth rates in Europe stagnating around 2 percent, England is right to question whether it is in its best interests to remain within the union. The U.S. can support Britain by continuing its robust trade and investment relationship and by leading by example.