Armstrong Williams
|
Posted: May 24, 2016 12:01 AM
Share   Tweet
The opinions expressed by columnists are their own and do not necessarily represent the views of Townhall.com. 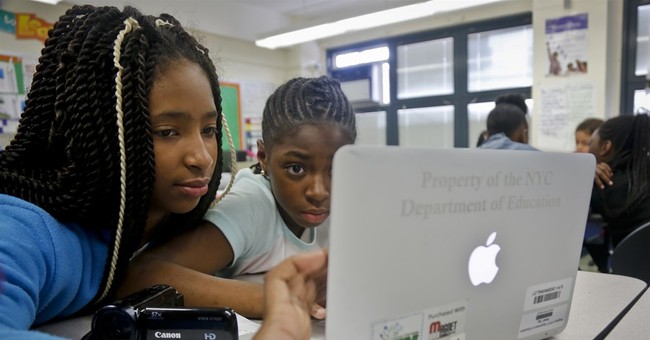 For far too many years we’ve tried to address the problem of failing educational achievement in America essentially by ignoring it. And by ignoring it, I mean, throwing money at it and hoping it’ll go away. But yet those problems persist. To wit, in the past year, for the first time in U.S. history, the majority of U.S. public school students fall into the category of the economically impoverished. This, despite the fact that spending per pupil in most American school districts is at an all-time high. There’s a gross disconnect here that no one’s talking about, and no one really wants to address.

The challenges with American public education came home to me as I watched my own niece struggling in school. She lives in a rural county of South Carolina that has one of the state’s lowest performing school systems. The usual culprits were to blame; ridiculously large class sizes, and frequent learning disruption by behaviorally challenged students that took away valuable learning time. The schools, despite having adequate funding, were nonetheless poorly managed and under-resourced. It got to the point that my sister and I were desperate to find a better option for my niece.

After several years of struggling against the educational system to no avail, we decided to take matters into our own hands. Fortunately our family had the resources to enroll my niece in educational enrichment programs, to take time with her to make sure she completed her assignments, to find appropriate private tutors – and ultimately to move her into a better school. She is now thriving, and performing above her grade level in all her subjects. My niece is a success story, but those left behind in the failing schools are sadly condemned to an uncertain fate.

So let’s get down to brass tacks. What exactly should we expect of our educational system? What should we not expect? That is quite difficult to answer effectively because most public schools cannot control the quality of students that attend. They have to take whoever shows up and deal with it the best they can. So, increasingly, schools have become an extension of the welfare state. They are expected to feed students who come from impoverished homes. They have to deal with the socio-economic problems that students bring with them – and often find themselves in the position of being behavioral counselors, mental health professionals, and babysitters. A smaller and smaller portion of each school day is spent actually focusing on learning.

And what about the quality of education itself; should schools be primarily focusing on ‘liberal arts’ education, or the hard sciences? We live in a country in which less than half the engineers and scientist were educated in America, and even fewer of those scientist who were born in America are products of the public education system. Companies like Apple and Microsoft are begging the government to expand the H1-B Visa program and similar measures to permit more foreign-trained engineers and scientists to enter the country and stay after they have completed college here. The U.S. continues to fall further and further behind other leading nations in math and the hard sciences.

The answer is clear – we need fewer African and hyphenated American studies majors, and more computer science majors. But our educational system is woefully underprepared to produce students with the requisite math and science skills, the critical thinking skills, to compete in college level engineering and science courses.

Here’s where the gap gets really bad. Students are paying hundreds of thousands of dollars and coming out of school saddled with debt – only to be found working as baristas at Starbucks.

Of course they’ll have a dog-eared copy of Proust or Jane Austen to read during their coffee breaks – at least they can afford those working at a coffee shop – but compete in the global economy, they cannot. There is an unspoken debt crisis among young people who’ve barely lived, haven’t started families or even bought their first home – but are armed with a degree in ‘Feminist Studies.’  They’re in debt to the tune of over $1.2 trillion with nothing to show for it.

What is the solution to this pernicious dilemma? Not the knee-jerk response - ‘throw some money at it.’ This is not a problem that can be solved by money alone. Throwing money at the current educational system will merely add fuel to the flames. What we need is a leaner, meaner, more results-focused educational system. The federal government should get entirely out of funding education that is not related to productive vocations. If colleges want to school their students in the liberal arts, if they think those degrees are so valuable, they should pony up the money themselves. But the government is doing students a grave disservice by putting them into deep debt for education that will not earn a return on the investment of time or money.

Secondly, at the elementary and secondary school levels, kids with demonstrated behavioral problems need to be quickly extracted from learning environments where they interrupt and prevent other students from learning. Parents may not like being told their child is a cancer on the classroom – but that’s what it is. The responsibility for bringing a student to school who knows how to behave must be squarely placed on the parents. Doing this is sure to get their attention – and cause them to become more attentive to their child’s emotional health.

We do not have the luxury of raising another generation of failing children. It’s not being ‘nice’ to them to engage in social promotion only to arrive in the workforce unable compete for well-paying jobs. We have to prioritize effectively, root out the bad apples, and focus our educational resources on developing critical science and engineering skills that will move our nation forward.