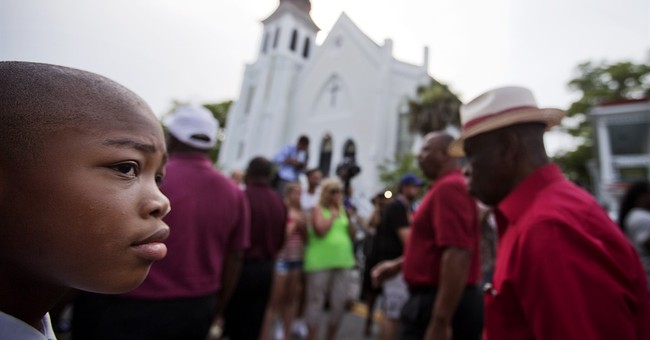 With every passing day, new and increasingly vile reports of evil acts bombard our lives, jolting us out of our day-to day-lives. The latest comes courtesy of a man and woman in San Bernardino, California who viciously murdered 14 people and left at least 17 wounded.

The pattern that unfolds across the news media has become familiar. The word of an incident breaks, it spreads like wildfire across the internet, radio and television. Networks move to wall-to-wall coverage and talking heads fill air time with analysis even as the action is unfolding and information is hard to come by and largely unsubstantiated.

One of the consequences of our hyper-connected world is that our political leaders and presidential candidates rush to push out statements weighing in on the tragedy du jour. Some statements come via Twitter, others on Facebook, some through written statements released to the media in the form of a press release. Some come with the white-hot lights of television cameras upon them.

In order to remain topical, interviews on any subject suddenly swerve off-course to include questions about the latest bad news. Whether or not the subject of the interview has any unique knowledge of the situation (and they almost never do), he or she is asked to weigh in and provide analysis and reaction.

You can learn a lot from the person from how they respond to these questions. There are those who are cautious and careful and hesitant to say much or go out on a limb without having assessed the facts and gathered more information.

There are those who immediately ascribe motives based on their prejudices or past events, who let the words fly without pausing to consider how the facts may or may not support their worldview.

There are those who reflexively turn every issue into a partisan wedge. Every tragedy become an opportunity, a chance to lambaste the other side and score political points.

Far too often in Washington, the natural order is reversed. People don’t wait for the facts to emerge and then draw conclusions. Instead, they rush to spin a situation in whatever fashion that best supports their interests or agenda. For instance, President Obama and Democratic front runner Hillary Clinton immediately began talking about the need to enact gun control legislation even as the information about what had taken place in California was trickling in and we did not yet have indications about what motivated the attack.

In short, it often seems these days like there is no time to pause and to actually reflect. The trial pushes forward before the evidence is gathered. The media machine demands discussion before we even know the questions that must be answered.

Perhaps this is just a natural human reaction. In the face of tragedy we grasp for something, anything, that will help make sense of heinous events that boggle the mind. Maybe we rush to obsess over the heartache because we empathize with the victims; maybe we are simply entertained by the hyperbole and the dramatic images and the soap opera of carnage.

But perhaps this dramatic media cycle of binge and purge is making us more numb to the real consequences of what is taking place around us.

All too often, the story of an attack lasts for a couple of days and is seemingly the only topic of conversation. Then the story is overtaken by events. The world moves on and the latest incident fades back into the background only to become quickly forgotten, the latest in a mind numbingly endless stream of tragedies.

While often unseen, the brutal aftermath of such incidents lingers, especially for the families and friends of those who are wounded and killed. The press may have moved on to another story, but the gaping hole of life without a murdered friend or relative does not close so quickly.

I speak from experience. My cousin Clementa C. Pinckney was among those whose lives were torn asunder when a racist terrorist gunman rampaged through a South Carolina church. Remember that one? That was the shooting that came months before the attacks in Paris, which unfolded when I was in Europe. It predated the California holiday party massacre. It was months before the assault on Planned Parenthood in California. It was sandwiched somewhere between the scores of other mass shootings here in America.

In the coming days the facts will emerge about the carnage in California. Our law enforcement experts will almost certainly uncover the motives behind the attack. It is hard when we are clamoring for information, but we must be patient.

Then, when we are armed with the facts, we must draw conclusions about what potential policies and procedures or other steps we should consider implementing to reduce the likelihood of such events taking place here. These are trying times in America, but we shall overcome.