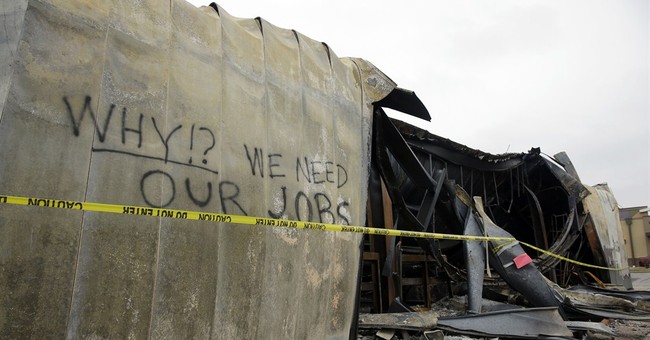 When African-Americans marched on Washington to hear the historic ‘I have a dream’ speech by Martin Luther King, they were pressing for a society that looked very much like that in which they already lived – a society built on freedom; a society that protected life, liberty and the pursuits of happiness among its citizens. Many of those freedoms and protections had not been extended to African Americans of course. And so they came to Washington to ‘cash a check’ (to paraphrase King) that would cover the remainder of their birthright as American citizens.

What blacks got when they cashed that check was not their birthright. Of course the right to vote was formally recognized and began to be slowly enforced. But Washington’s main thrust was to try and paper over the decades of pain and oppression suffered by blacks with a shiny new toy – the Great Society program. The program offered to cure all the ills of black America with government entitlements – Food Aid, housing assistance, Medicare, a variety of educational enrichment programs, and the like – it promised a glorious path for Americans (black Americans especially) out of poverty and into the middle class. Those were the glory days of America. With a large industrial base and a growing economy, it seemed as if authorizing major new spending programs designed to deal with intractable social problems just might be the key to maintaining racial harmony and achieving the goals of social justice set forth by King and others.

Fifty years later, that experiment has finally earned a retrospective. Looking back on it, we should have seen as a nation that the Great Society could not have been a permanent solution and might even be detrimental to America’s growth. The programs began to grow and expand as more and more citizens, got involved. For far too many, Johnson era anti-poverty programs became more of a permanent dependency rather than a lift out of poverty. In a perverse way, the Great Society helped to further entrench some of the social problems that gave rise to it. And as American population growth slowed, it began to reveal its other flaws as well.

or problems is that the programs became a political patronage strategy for successive generations of politicians – any time they wanted to secure a part of the American electorate they would campaign on expanding Federal spending to cover some new area of social need – whether that was prescription drug coverage, expanded head start, a new jobs program – and ultimately between new programs, slowing population growth, and an aging population, we inadvertently created the almost impossible budgetary situation that we are facing today.

Today we face a situation in those social programs have grown from a miniscule proportion of the GDP (initial great society programs cost a mere $2billion), to a situation in which entitlements have grown so onerous that we now have to borrow funds (great peril to our future stability) in order to fulfill current obligations. When we look at the countries around the world that have gotten into this situation, Greece comes foremost to mind. Greece got caught up in the transition to the Euro and essentially turned its government into a national piggy bank, from which funds were extracted but not put in place. Once the easy money stopped in 2007, Greece found itself in the impossible situation of being unable to service even the interest on its debt, sending the government into bankruptcy and the society into a chaotic downward spiral.

People economic charlatans such as Paul Krugman argue in essence that America can (and perhaps should) run over 100% budget deficits ad infinitum. The one major assumption upon which that snake oil business depends is that the U.S. currency continues to serve as the world’s reserve currency, and that America’s lenders will continue to fund our extravagant spending forever. That is a very shaky assumption indeed upon which to base such otherwise rash financial management practices.

But more importantly, the programs themselves have not worked as intended. The inner cities are still a mess in the places in which gentrification has now essentially displaced inner city populations. Poverty is still a major problem. Public education continues to face a crisis of shamefully underserving America’s children. The housing crisis is worse than ever in some cities, where lack of available and affordable housing is increasingly putting poor people further and further away from jobs. And healthcare has become the eight hundred pound gorilla in the room that – before the largely fractious political debate over a flawed Obamacare – no one dared whisper about. Although the rise in health costs has slowed somewhat in the short term – health care spending still constitutes almost a fifth of GDP – and threatens to balloon in the foreseeable future if the current system is not fixed. Americans are still overspending for government-run health care.

It would be one thing if the costs of Government paternalism were high but the benefits were worth preserving. And even in that scenario we would have to look into ways of making the system more efficient. But unfortunately, for too many, the costs have been high but the benefits fleeting at best. To be fifty years later still faced with chronic under-education, social marginalization and a concentration of poverty in the face of receding government entitlements is truly a scary place indeed.