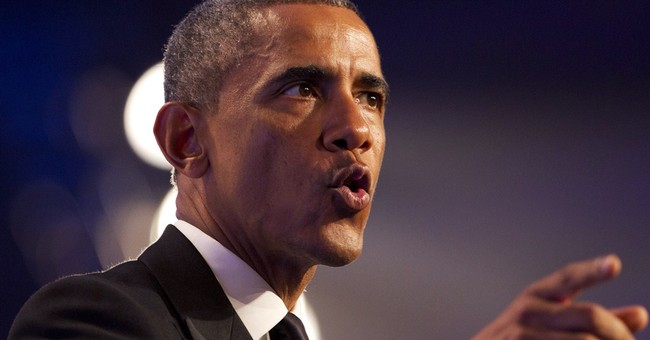 The flames of conflict in the Middle East never go out, but in recent weeks they have been growing red-hot with increasingly dangerous implications for the United States. And President Obama is leading the United States headlong into the flames, but without a clear strategy in place that will avoid us from getting burned. Here we go again.

Somehow within just the last couple of weeks, the Administration evolved from inaction and utter befuddlement about what to do about Islamic State to our armed forces carrying out large-scale air bombing campaigns in both Iraq and Syria. In a moment of unscripted honesty, President Obama told reporters during a September 4 news briefing who asked about Islamic State, “We don’t have a strategy yet.”

That comment was a huge blunder, which made the President look like he was once again in over his head, without a solid strategy in place. Apparently the strategy of “leading from behind” that the President championed in the past related to Libya has evolved to mean “falling behind” in terms of staying one step ahead of our country’s enemies.

Somehow, just weeks later, the White House is trying to sell the American public on the idea that we have a strategy in the Middle East to defeat groups that pose an imminent threat to our national security. The President campaigned on a promise to withdraw our troops from Iraq, and many Middle East analysts believe that America’s swift disengagement from the country emboldened the radical Islamists who have now become entrenched in the vacuum that our withdrawal created.

Military officials are now warning that the war that is getting underway in Syria could last for years. Given the President’s tattered track record when it comes to making foreign policy decisions related to the Middle East, every American should be deeply worried about what could happen next.

Time and again, President Obama has misjudged the unfolding of events in one of the world’s most troubled regions. Our feckless, inconsistent and haphazard policies have emboldened our enemies who increasingly view us as a paper tiger whose occasional purrs are worse than our bite.

In Libya, our strategy of “leading from behind” ultimately left behind a chaotic country that is more unstable than before. In Egypt, we repeatedly shifted course, ultimately throwing our support behind efforts to unseat Hosni Mubarak. In short order this brought the Islamist Muslim Brotherhood to power, before the military ultimately managed to regain control.

In Syria, the President warned that the use of chemical weapons was a red line that Assad must not cross or the United States would act. Assad, sensing perhaps that Obama was bluffing, gassed women and children to death and has continued to unleash the military on his own people leading to the slaughter of over 100,000 Syrians.

America’s most vital ally Israel has been repeatedly alienated by the President, who despite providing much-needed reinforcements to help Israel guard against thousands of Palestinian rocket attacks, has produced more tension between America and the Jewish state than we have witnessed in decades. Iran marches forward on its quest for nuclear weapons, secure in the knowledge that war-weary America will almost certainly not live up to its repeated promises to consider all options (including military ones) to prevent the radical Islamic regime from achieving atomic arms.

The list of missteps outlined here only scratches the surface. There are countless examples of the President’s lack of leadership leading to outcomes in the Middle East which endanger Americans and signal to our enemies that we are a ship afloat, with no captain at the wheel. How can you know if you are on track if you don’t actually know where you are going?

America needs to wake up. How much blood and treasure are we prepared to spend fighting wars without clearly articulated goals? How is it possible that we move from having no strategy to racing down the path to full-fledged war?

If our commander in chief had demonstrated even a basic understanding of the Middle East then perhaps we could feel confident that he had a plan in place that would serve our country’s best strategic interests. But President Obama has shown time again that he doesn’t truly understand the dynamics of the Middle East and what it will take for America to play a role there.

Make no mistake about it, the region is replete with bad actors and there are no easy fixes. Yet in order to construct a solution you must first understand the problem. For America to get what it needs, our President first needs to get a clue.