USCIRF is Right to Call Out India’s Religious Freedom Violations

Arielle Del Turco
|
Posted: Apr 30, 2020 12:01 AM
Share   Tweet
The opinions expressed by columnists are their own and do not necessarily represent the views of Townhall.com. 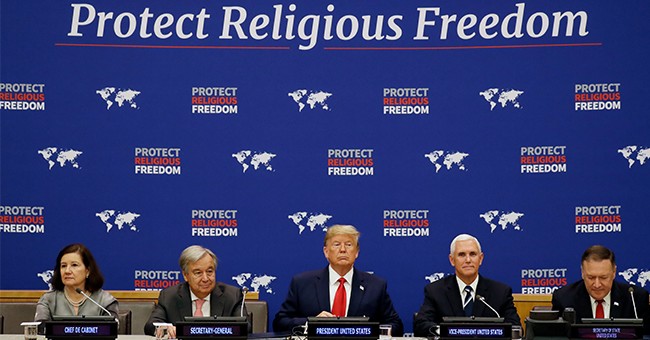 This week the U.S. Commission on International Religious Freedom (USCIRF) recommended that India be designated a “Country of Particular Concern”—a recommendation reserved for the world’s worst religious freedom violators. In its 2020 annual report, USCIRF found, “[t]he national government allowed violence against minorities and their houses of worship to continue with impunity,” and government actors engaged in “incitement to violence.” Despite repeated denials by Indian officials, identifying India among the world’s worst violators of religious freedom is entirely justified. After bloody, religiously-motivated riots shook New Delhi just last month, and Indian authorities stood aside or even took part in the violence against Indian Muslims, it is increasingly clear that religious freedom is on the decline in India.

Hindu nationalism has been steadily gaining influence in India ever since the election of Prime Minister Narendra Modi in 2014 and the rise of his Bharatiya Janata Party (BJP). This ideology advances the discriminatory narrative that “to be Indian is to be Hindu.” By tying the national identity to the Hindu faith, it teaches that anyone who adheres to another religion is eroding national unity. As the largest religious minority groups, Muslims and Christians bear the brunt of hostilities from Hindu nationalist radicals.

The BJP-led government passed the Citizenship (Amendment) Act in December, which gives foreigners of specific religions a fast-track for citizenship—excluding Islam. This is only the latest measure to target Muslims. Muslims fear an effort to strip them of their Indian citizenship will soon follow.

Christians and Muslims also endure mob violence inspired by Hindu nationalism. Mob attacks occur suddenly and without warning. Last month, over 150 radical Hindu nationalists interrupted one Christian worship service in India’s Karnataka state, dragging the pastor out of the church and brutally beating him for hours.

The Religious Liberty Commission Fellowship of India documented 366 such incidents in 2019, in which Christians were targeted for violence, intimidation, or harassment. Violence against Christians has only increased following Modi and the BJP’s ascent to power, according to Open Doors.

The growing Hindu nationalist ideology has even inspired vigilante “cow protection” groups, who object to those who eat meat from this animal considered sacred in Hinduism. These militant Hindu groups have launched violent attacks mostly against Muslims, although low-caste Dalits and Christians are also targeted. Police have stalled investigations into many of these cases, and some political leaders have even defended the attacks.

Mobs attack religious minorities confidently because they know they have the upper hand in the legal system. Following attacks against them, Christians often report the incidents to the authorities only to find that their attackers have already filed complaints against them.

International Christian Concern reported earlier this month that Hindu nationalist radicals aggressively threatened one Indian pastor and his congregation because they refused to deny their faith. For this the Christians were beaten, and the radicals filed four legal cases against them. This example is just one of many.

Beyond malicious suits brought by radical attackers, religious minorities in India are also vulnerable to anti-conversion laws. Anti-conversion laws are notoriously used to oppress religious minorities in India, and they remain on the books in several Indian states today. Supposedly meant to prevent forced conversion, these laws actually restrict a basic principle of religious freedom—the right to change one’s faith. And in practice, these laws only discourage conversion away from Hinduism. Still, Hindu radicals use “forced” conversions as a false pretext to justify violent attacks against Christians.

The paranoia of some Hindu nationalist leaders concerning religious conversions sometimes harms their own people. When the Christian humanitarian aid group Compassion International was suspected of encouraging religious conversions, the organization was forced out of the country. It was India’s largest single foreign donor and provided food and medical care to 145,000 Indian children from all faith backgrounds.

Rather than attempting to calm religious tensions, Indian officials often use inflammatory rhetoric against Christians and Muslims, which can inspire further attacks against minorities. Discriminatory pronouncements from government officials fosters a culture that puts all religious minorities at risk. More than that, the Indian government so often fails to protect minorities from religious violence that minorities have come to no longer expect protection from their government. The Indian government’s failure to procure justice for victims of religious attacks makes India a perilous place to adhere to any faith but Hinduism.

So while India’s Hindu nationalist leaders may object, USCIRF is entirely justified to classify India as a global leader in religious freedom violations. When the State Department releases its Country of Particular Concern designations later this year, India should be on the list. The mounting evidence of persecution and religiously motivated violence in India leaves no other viable alternative.

Arielle Del Turco is the Assistant Director of the Center for Religious Liberty at Family Research Council.